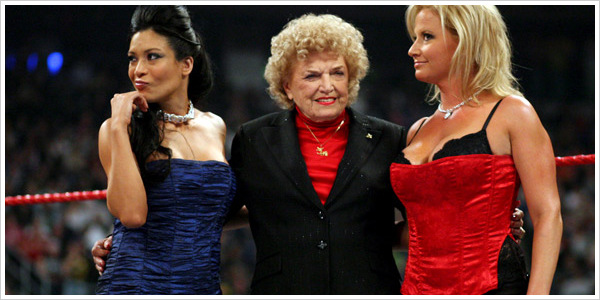 Legendary Diva, Tammy Sytch, better known as Sunny revealed that she didn’t think she’d get along with the new generation of Diva – Maria and Melina – when she turned up at Raw’s 15th anniversary show last December. Sunny also reveals that fellow former Diva, Dawn Marie had described to her that the Divas lockerroom was more like the set of Mean Girls, where all the girls hated each other:

I was shocked because here I am, ready to walk into the female locker room after hearing all these horror stories from people like Dawn Marie, who told me how all the girls hated each other, and every single girl in that locker room kissed my butt (laughs). They were awesome. They paid me so much respect, and the girls that I thought I would not like at all, like the girls from the Diva Search like Maria, she was one of the nicest ones there.

Iâ€™m not a big fan of the Diva Search thing. I was raised old school in this business. To bring girls in off the street that know nothing about this business and giving them a job when there are so many girls that really respect this business and have learned their craft that canâ€™t get a job, I think thatâ€™s the wrong way to go about hiring girls. I was thinking that I definitely was not going to like these girls, but Maria came right over to me; she got me a bottle of water when I was thirsty and couldnâ€™t find anything to drink; she was great. Melina â€“ I didnâ€™t like her character, so I guess she was doing her job really well because I bought into it â€“ she was great. Now we keep in touch all the time. We talk on the phone, we e-mail, we text. Sheâ€™s awesome. Every girl was just so nice. I was like, â€œWait a minute. This is not the locker room that Dawn Marie was warning me about.â€ It was completely different from what I expected.

Sunny also had an interesting viewpoint on women’s wrestling in the WWE. Warning to Diva fans, it may make you roll your eyes:

First of all, I think if you have more than five girls at one time itâ€™s way too much. It takes all the specialness out of it. When I was [in WWE], there were three of us, and every time you saw one of us it meant something. Now, thereâ€™s a girl in practically every single segment on the show. To have a womenâ€™s match on every show I think is just too much. Iâ€™m not a fan of womenâ€™s wrestling. Just leave that part to the guys. When youâ€™ve got 19-20 girls on the roster, itâ€™s redundant and itâ€™s not a special thing. To be honest with you, a lot of girls that came from the Diva Search, I canâ€™t tell one from the next. I donâ€™t know what their names are; all I know is that they came from the Diva Search at some point.

I definitely agree with her opinion on the Diva Search but her old school mentality on women’s wrestling makes my skin crawl. Honestly, Tammy wasn’t much of a wrestler so I think it’s redundant for her to have an opinion on women’s wrestling in the WWE. I won’t get on my soapbox and explain the history that we’ve seen be made since Sunny’s era, such as Trish Stratus, Chyna, Lita, Victoria etc. because you all know that history too. Times have changed since Sunny was famous, I doubt she’d even be able to step into the ring with WWE’s worst Diva. And as for having just three girls? I think I’d go a little stir crazy if I had to watch just three girls every week. I love that WWE has a large Divas roster and if Tammy were to watch the product today, she’d realise that most of the Divas right now are being used in the ring and are showing some penchant for wrestling; for the first time in a long time, we don’t have an entire roster made up of hopeless Diva Search contestants. Tammy is the second old school Diva who has expressed her dislike for women’s wrestling, despite the fact that she is a woman in the wrestling industry. *Eye roll* You can read the rest of the interview by clicking here.