The Five to Watch 2010: Britani Knight

Welcome to The Five to Watch 2010! Diva Dirt is always on the look-out for bright, young talent breaking into the scene in women’s wrestling. Always with a finger on the pulse of up and coming talent, over the next week, we will bring to you the five talents we that we feel could be breakout stars in the future. Meet the Class of 2010… 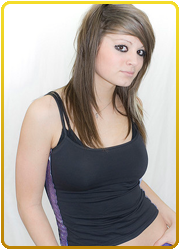 Who is she?
At the age of 18 years old, Britani Knight is the best female grappler in Europe. Hailing from Norwich and the legendary Knight Wrestling Dynasty (including father “Rowdy” Ricky Knight, mother Sweet Saraya and brothers Zebra Kid & Zak Zodiac), Britani has already chalked up five years of experience around the halls of the UK and more recently mainland Europe. Trained out of the Knight family-run WAW Training Academy, Britani has cut her teeth wrestling for promotions such as WAW, HEW, Premier Promotions, RDW, Pro-Wrestling EVE, All Star Wrestling, NWF (Norway), BCC (Belgium), GSW (Germany), DPW (Denmark) amongst others.

Her story so far…
It’s hard to look at the composed and talented Britani Knight in 2010 and reconcile the fact that she only just turned 18 years old over the summer. Of course, as noted, it’s five years since the fresh-faced Britani made her debut as one half of the popular tag team “The Norfolk Dolls” with friend Melodi. When ‘Dolls’ partner Melodi retired, Britani found herself thrust into the singles ranks, where she has excelled ever since. Early matches with both her mother Saraya and generation rival Jetta helped her gain experience in this transitional period, but it was in 2009 that the pieces started to fall into place that turned the young Miss Knight into a bonafide star in her own right. A vicious turn on her mother allowed Britani to step out of her family’s long shadow and establish herself as the de-facto undisputed British Ladies Champion by capturing consecutive singles titles in HEW, WAW, RDW & RQW.

Not only technically sound, Britani can be eye-wateringly physical when needs be (a trait that has clearly been passed down from mother to daughter). In fact, Britani showed that side to her game when she and her mother brawled to a venue-wide no-contest with the ladies of London Inc. at Premier Promotions in February which resulted in promoter John Freemantle issuing legitimate three month suspensions for all four girls due to the utter carnage. The inevitable rematch three months later saw Britani and her mother add the Premier Women’s Tag Titles to their trophy case in a stellar (and thankfully less violent) bout. Although she’s recently dropped two of her singles titles back to her mother, there is little doubt that Britani remains the standard bearer of European women’s wrestling in 2010 and stole the show at Pro-Wrestling EVE’s debut show in May against one of the only other women who could even dare lay claim to that title, Blue Nikita.

Why we chose her…
Britani Knight is, quite simply, a prodigy – and an ever-improving one at that. Not since Rebecca Knox several years back has Europe seen a female wrestler who quite simply ‘got’ all aspects of the wrestling game as well as Britani does at her age. The heel persona that she has cultivated since her turn on her mother continues to add new wrinkles all the time, and her charisma fills any hall in which she works. At EVE in May, the main event of the first half of the taping between Britani Knight & Blue Nikita was the consensus match of the night, and should introduce Britani to a new international audience. Already internationally travelled across Europe, a jump across the pond may be in sight for Britani in 2011 now that she’s turned 18. Already singled out by SHIMMER ring announcer Joey Eastman as an “awesome talent” as he pimped the debut EVE DVD from the ring at SHIMMER earlier this month, this writer is also aware of at least a couple of potential offers for a transatlantic debut in the coming year. As for TNA & WWE…? Well, let’s just say that they’re not unaware of her. Big things await Britani Knight, sooner or later. Of that we can be certain.