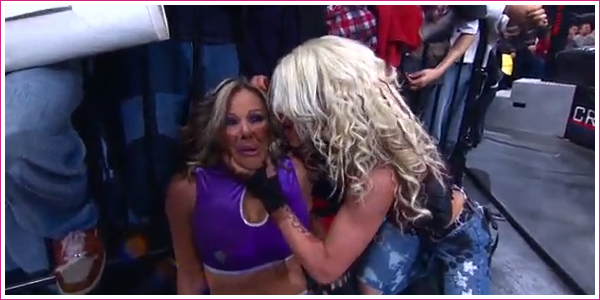 This week on TNA Impact, one of the biggest news stories of 2009 came full circle as former Knockouts Champion Angelina Love made her return to the company after being released in September due to visa issues. But before we get into that, Velvet Sky and Madison Rayne of The Beautiful People took on new Knockouts Tag Team Champions Awesome Kong and Hamada. Check out the match and Angelina’s return below:

The Beautiful People make their way to the ring first, sporting their new matching ring gear. I know she’s not actually wrestling, but would it kill them to pick up a trashy velour outfit for Lacey? She looks tragically out of place next to the newly coordinated Velvet and Madison. As the trio strut their stuff on the ramp, Velvet Sky spots a familiar face in the crowd. Is that… Ashley Massaro? No, it’s her old friend Angelina Love! Reunion Time! Velvet and Madison seem ecstatic to see their former teammate, but Lacey Von Erich doesn’t share the sentiment. In fact, she makes sure to give Angelina a good dose of stink-eye while greeting her. I love how TNA played up the tension between Lacey and Angelina. If I didn’t know any better, I would think Lacey genuinely disliked Angelina, because that fake ass smile she gave her was 100%, Grade A bitchy. I may not a fan of Lacey between the ropes, but it’s the little things like this that she excels in.

Next out is the Tag Team Champions Awesome and Hamada looking surly as usual. I couldn’t help but notice that Hamada seems to still be having trouble with that ankle of hers. Props to her for working matches essentially on one foot.

The bell rings and it looks like it’ll be Hamada and Velvet kicking things off. Velvet starts the match on a sour note, striking a Karate Kid crane pose. That’s not offensive at all, right? The two lock up and Hamada forces Velvet to the ropes prompting a not-so-clean break by Hamada. Hamada unwisely turns her back to Velvet, who jumps at the opportunity to take her down by the hair. Velvet mounts Hamada and hits a few rights, followed by a splash in the corner and her trademark bulldog. She goes for the pin, but it’s not enough to keep Hamada down.

Velvet and Madison exchange quick tags, keeping control of the champion. The duo take a bit too much time executing a double Russian Legsweep and Hamada capitalizes, tripping both girls and tagging in Kong. Kong snatches both girls down to the mat by the hair, before stacking them up in the corner for a splash of her own. Finally, she grabs Madison, the official sacrificial lamb for The Beautiful People, and hits the Awesome Bomb for the three count.

As we said on last night’s Post-Impact Show, the match was just fraction of what it could have been. It seemed to drag on and it didn’t help that the majority of the match was worked by Velvet Sky, who is definitely the weaker link wrestling wise. Furthermore, where were Sarita and Taylor Wilde? If anything, they deserve first crack at Kong and Hamada. Hopefully we’ll be seeing them next week on Impact.

After the match, Angelina Love runs to the ring to check on Madison, who probably could use a neckbrace after that Awesome Bomb. Angelina advises Velvet to roll Madison over, and in the meantime attacks an unsuspecting Lacey Von Erich. By the time Velvet realizes what’s happening, it’s too late. Angelina hits a picture perfect spear and mounts Velvet, flailing like a raving lunatic. She goes to finish off Lacey with a kick, but falls down landing on Lacey’s back. Note to Angie: If you’re going to be running, jumping, fighting people or anything else athletic, maybe platform shoes with sky high heels aren’t the best choice of footwear. Just saying.

Angelina takes the action outside the ring, whipping Velvet into the barricade. She grabs a petrified Velvet and screams in her face: “Surprised to see me? Huh, Velvet? Didn’t think I’d be back, huh sweetheart?”, before pushing her head into the guardrail. Angelina retreats up the ramp, yelling about Velvet replacing her. An intense moment for sure.

Honestly speaking, the first part of Angelina’s return, the initial attack on Velvet and Lacey, left much to be desired. The attacks seemed weak and sloppy, but I think much of that can be attributed to Angelina’s sketchy footwear. The second half however was pure gold. Angelina’s had some real spunk and fire when she was taking it to Velvet and Velvet’s facial expressions and crocodile tears really hit home, making it feel like she was really surprised and frightened. Impressive showing from both Angelina and Velvet, in my honest opinion.

All in all, not the best showing for the Knockouts in the ring, but the brawl between former and current Queen Bees, Angelina and Velvet definitely made up for it. I honestly can’t wait to hear what the former has to say to her former BFFs on next week episode of Impact. What did you think of the second coming of Angelina? Leave your thoughts in the comments.