The Tiffany Guide to Impact: Beatdowns, Behemoths and Ugly Sticks 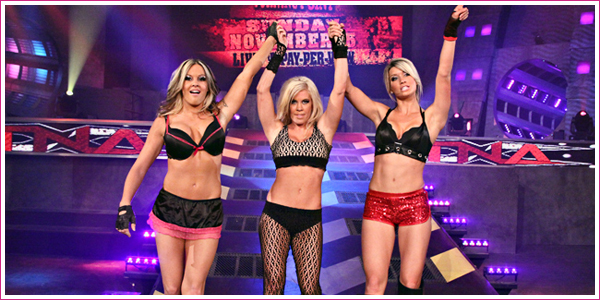 This week on Impact, TNA gives us a double dose of Knockouts action. But first, we’re treated to the second installment of  The Beautiful People’s ‘movie’, “Meanest Girls.” Oh joy… Watch below as Velvet, Madison and Lacey find a surprise while searching for the Tag Team Champs, Saritaylor:

TBP make their way into the Knockouts locker room, expecting to terrorize Saritaylor, but are met by the Knockout Champion ODB instead. After tossing some insults their way, ODB gets the jump on the ‘STD Sisters’ (lulz) and takes Lacey out with a kick to the gut. As expected, the number game comes into play as TBP overpowers ODB, and give her a ‘makeover’ (now with full body bag!).

I hate to admit it, but I rather liked that segment. Maybe it was because of ODB’s foul mouth, but everything came together perfectly. Take note WWE, this is how a backstage segment should be done. All the dialog was delivered well without sounding like it was being read directly off a script. Well done, TBP. Now if you could only put on a decent match…

Next up, Hamada takes on Tara in singles action. Dream Match much?:

The ladies start off with a standard lock-up, which ends in a stalemate. On the second go ’round, Hamada gets the upper hand with a takedown. Tara hits a hip toss, but is kicked away by Hamada. Back on their feet, they exchange several standing switches (say that five times fast), before Hamada takes Tara down once again. After a lucha-esque exchange, the hard hitting Knockouts find themselves on level ground once again.

Tara and Hamada lock up for a third time, but this time Hamada lets loose with a series of headbutts and chops. Hamada tries to follow up, but Tara goes on the offensive, leveling Hamada with a couple of clotheslines, followed by her patented standing moonsault for a two count.

Tara takes Hamada to the corner and hammers her with a few shoulders to the gut. Tara attempts to whip Hamada across the ring, but Hamada counters and charges Tara in the corner. Tara counters, but is given another head butt for her troubles. Hamada walks the ropes, Dead Man style, and executes a beautiful Mexican arm drag. Tara tries to get back in the game with a clothesline, but is met by a sick enziguri from Hamada, followed by a modified crucifix pin for a two count.

Dazed and confused, Tara goes for yet another clothesline, but gets caught by Hamada, who hits a suplex. Hamada goes to the high risk district, looking to hit her moonsault, but Tara gets her knees up. Tara picks Hamada up off the mat and hits the Widow’s Peak for the win.

Tara’s celebration doesn’t last long, as Awesome Kong makes her way to the ring, determined to piss in Tara’s cornflakes. Not looking to repeat last week, Tara comes off the top rope with a crossbody, taking out several innocent security guards in the process. Things get ugly fast, as the two heavy hitters have a Springer style brawl (Jerry! Jerry!), complete with weave pulling and windmilling. After the match, Tara cuts a promo, warning Kong before their match at Turning Point.

I found this match more enjoyable than last week’s Alissa vs Tara. The action was fast, clean, and hard hitting. Given a little more time, I’m sure these two could put on matches that rival the legendary Kong/Gail feud. In regards to the Kong/Tara brawl, it’s nothing we haven’t seen before. However, it is nice to know that we’ll finally be getting the payoff at Turning Point, in a steel cage no less. I have a feeling this will be a match to remember.

And last (and definitely least), Madison Rayne goes up against one half of the Knockouts Tag Team Champions, Taylor Wilde:

First out is Madison, clad in black lace (Burn that outfit Madison. Seriously…) followed by Taylor. Right off the bat, Madison goes in the attack, but Taylor is too quick. Taylor avoid her attack and cinches in a headlock. Madison sends her to the ropes, but Taylor counters with a kick, a pretty (but pointless) flip and an arm drag. Taylor goes for what looks like a headscissors, but is taken out by Madison.

Madison takes advantage, striking Taylor with several punches before mimicking her signature pose (In Madison’s defense, it is a pretty weird pose). Madison takes a little too much time taunting and Taylor takes her down by the leg. Madison tries to get back in control, but Taylor manages to roll her up for the win.

Ever the partycrashers, TBP Baywatch-run down the ramp to interupt Taylor’s celebration. The ‘Meanest Girls’ go on the attack with the help of their newest accessory: The Ugly Stick. That’s some notch originality people! Soon Sarita (sans crotch tights. Praise the Lord!)  joins the party, only to get beat down by the Ugly Stick. Luckily, ODB makes the save for her fellow champions, chasing off the beautiful trio.

Not much to say about this match. It was way too short, but the work was good. The post match fight however, was abysmal. Bodies everywhere, ass cheeks aplenty, not to mention LVE’s piss poor selling. If this is any indication of Turning Point‘s title match, I am officially dreading November 15th…