The Tiffany Guide to Impact: Knockoutpalooza 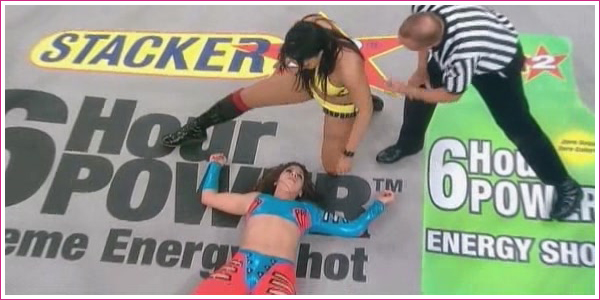 This week’s installment of TNA Impact was jam-packed with Knockout action, including two promos and the debut of Sarita and Alissa Flash.

First, Impact delivered a promo setting up Sharmell vs. Jenna Morasca. Both Sharmell and Jenna hold nothing back in expressing their ill feelings towards one another. Jenna does not seem intimidated at all by Sharmell, but appears to overcompensate with words what Sharmell has in experience. I’m not exactly sure where Sojourner Bolt and Awesome Kong fit in at Victory Road, seeing as the match is still advertised as Sharmell vs. Jenna. Given the impression that each competitor will have her own lady in her corner respectively, it doesn’t do much to level the playing field. Jenna would easily have the edge with Kong at her side. Though, what’s most amusing is that TNA seems to be really treating this as a serious match. Well if you’ve got to admire anything about TNA, it’s got to be their ability to hype anything. Just as I anticipated, this will be only one of two Knockout matches. So, it’s nothing for fans to pull their hair out or souse their eyes out for just yet. I fear it will be that unimpressionable.

Further down the lineup, the Beautiful People make their way to the ring with some choice words in mind.

Watch the promo and the Sarita-Alissa match after the cut:

Angelina Love explains her displeasure toward Victoria and the “fluke” that was her victory. Angelina still considers herself the Knockout’s champion and deems their past match-up as “unofficial.” However, a belt-toting Victoria arrives to dispute her claims. The new Knockouts Champion announces a rematch at Victory Road to put the allegations to rest. Yet again, Victoria continues to toy with Angelina’s blatant fear of spiders. Angelina takes offense and “stops, drops, and rolls” herself across the mat. Who knew amateur fire safety tecniques were so effective against arachnids?

Victoria approaches a mortified Angelina from behind and sets her up for another devastating Widow’s Peak.

This promo does virtually nothing besides give Victoria some momentum going into Victory Road. A push the new champion hardly needs. This close going into the rematch, I would have liked to see Angelina gain a little offense. Though, you can always count on Angelina Love to deliver a humorous promo, squeaky voice and all. Consequently, I think we may all just have a good idea of the result of their impending match. If anything, this has just given us a clear-cut winner.

Now, in a highly anticipated debut of two of the newest Knockouts, Sarita and Alissa Flash, TNA delivers in promising a future division we can all be proud of.

Alissa Flash first approaches the six-sided ring and makes crystal clear of her preference of reference as “The Future Legend.” Next, a fairly excitable Sarita makes her entrance under the watchful eye of Alissa Flash.

Alissa starts of the match by spewing saliva in the face of Sarita, followed by an onslaught against the ring ropes. An irish whip to the corner and Sarita executes series of impressive moves including a flipping ropewalk armdrag and a dropkick that sends Alissa to the outside. Sarita launches herself through a suicide dive onto Alissa in a manner that can rival that of TNA’s X-Division.

However, Alissa Flash does not stay down for long. She pushes Sarita into the turnbuckle post, shoves her into the barricade, and slams her onto the floor.

Back into the ring, the crowd begins to get behind Sarita as she endures a few vicious kicks from Alissa Flash. Alissa again takes control of the match. She goes for cover, but Sarita tries to fight back. Alissa then leads her into the corner and presses her boot against the side of Sarita’s head. An irish whip later, Sarita counters with an impressive springboard crossbody into a pin. The attempt is unsuccessful and Alissa takes her down. Sarita gains the advantage again, this time with an MMA-type submission move. Alissa somehow manuevers herself out of the hold and enflicts a standing deathlock surfboard, driving Sarita into the mat. “In my neighborhood they call that a curbstomp,” Don West so comically chimes in.

Sarita goes for a reversal, but Alissa slams her with a lateral press. In a attempt to reverse an irish , Sarita goes for what could be a wheelbarrow bulling, but Alissa suplexes her back into the turnbuckle. Sarita’s head bounces off and Alissa goes for the pin, only rendering a 2-count.

Alissa goes for a finish, but Sarita ends the match with victory roll. At the end of the contest, both Sarita and Alissa tease a sportsman-like finish, but Alissa exacts revenge.

This match surpassed so many levels of remarkable, and it was only just a taste of what both Sarita and Alissa Flash can do. Although Sarita solidified her debut with a win, both ladies made a lasting impact. These are definitely two Knockouts to look forward to in the title picture, as either one would make a make credible contendor. The Knockouts division has been TNA’s saving grace for quite some time and it’s only fitting that they’d showcase some of their best female talent to break new ground.

It was refreshing and incredibly fulfilling to watch such a Knockout-heavy Impact. I’m very pleased to see that TNA is just as capable, if not even more capable, to bring up its women’s division to the level even higher than it was a couple years ago.