The Tiffany Guide to Impact – People Are Strange, the Knockouts Are Stranger 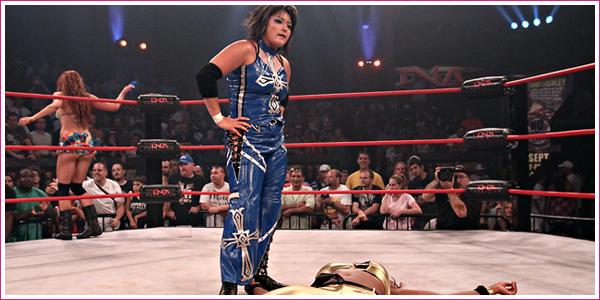 This week on TNA Impact leads us into Round Numero Dos of the TNA Knockouts Tag Team Championship Tournament (say that five times fast): Victoria & Christy Hemme vs. Hamada & Sojourner Bolt.  Talk about a tag team thrown together at the last minute…

As a precursor to the match, the Beautiful (Velvet Sky and Angelina Love) film a backstage segment further discussing Madison’s “mystery” partner.  More Lauren-pwnage arises.  “We no speak-y, ugly!”  I think that just about synopsizes that segment.

The contenders of this round of the tag team tournament make their way to the six-sided ring.  Holy tye-dye, Batman!  Christy has either confused a bathing suit for wrestling gear or she is paying a cheap homage to Daizee Haze.  I can’t decide.

Onto the match at hand… Somewhat of a teaser for what could be a dream match of the ages, Hamada and Victoria start off the contest as both ladies lock up.  Victoria gets the upperhand early with a bridge into the 2-count.  Victoria counters an attempt by Hamada and goes for a second cover.  Hamada kicks out and manuevers into a pin attempt of her own.  When both women perform respective kip-ups into a fighting stance position, a foretold stare-down commences.

In either a show of respect or arrogance, Victoria bows down to Hamada only to receive a kick to the shoulder in retaliation.  Following through on an Irish Whip, Hamada effortlessly springs off the middle rope and into a moonsault.  I blinked twice and almost missed it.  Victoria kicks out just as swiftly.

Sojo and her two-toned tracks get tagged in; she follows up an armbar with a kick.  Taking a bit of time to do a little trash talking, Sojo pays for it with a drop toehold from Victoria.  Victoria takes Sojo down again with a scoop slam.  Christy flails around a bit until Hamada gets tagged in.  Some brief tandem action, and Christy eats the bottom of Hamada’s big boot, followed by a series of headbutts.  TNA takes a needed break, and I’m left to amuse myself with Christy’s selling “ability.”
Back from commercial break, Christy scurries out of Sojo’s reach and quickly tags Victoria back into the ring.  Taken down by a few shots to the face, Sojo runs right into a nearly decapitating clothesline.  Sojo struggles to gain her composure and suffers a superkick a la Victoria.

After quickly disturbing the pin attempt, Hamada falls victim to a neckbreaker by Christy Hemme.  Better a neckbreaker than a face full of “firecrotch,” I suppose.

Once the ring is cleared, Victoria sets Sojo up for a devastating Widow’s Peak that brings it home.  The team of Victoria and Christy Hemme advances.  Victoria takes a moment to celebrate with her tarantula.  In an interesting development, a perturbed Hamada puts the final nail in the coffin and blindsights her partner with the Hamada Driver.  Mind you, this all takes place while Victoria and Christy Hemme (and Poison) watch.  Way to step up, ladies.

Decent Knockouts tag team match.  There was a good balance between the “lesser-acclaimed” wrestlers and what I’d refer to as the “big dogs.”  Some “dream matches” at play here, specifically between Victoria and Hamada.  These two were easily the big players in this match, and I’d like to see TNA explore that more some time in the future.  In more superficial thoughts, will someone please hook up our girl Sojo with a new wardrobe?  Nothing wrong with a bit of gold, but it’s just better received in smaller doses!  Think Sojo was who Jimi Hendrix had in mind when he wrote, “Black Gold?” (cue the ’60s inspired title)  Irish Dance Barbie Christy Hemme, on the other hand, just might be beyond saving.