The Tiffany Guide to Impact: The Strong Shall Prevail 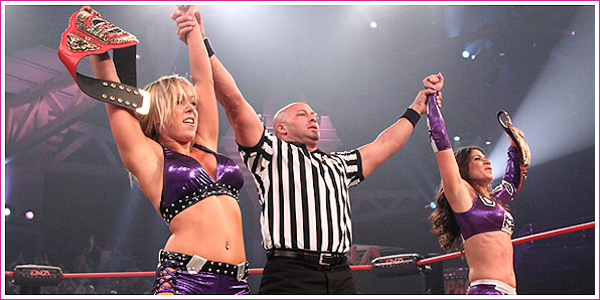 This week on Impact, the new Knockout Tag Team Champions, Taylor Wilde and Sarita take on Tara and the Knockouts Champion, ODB:

Taylor Wilde and Sarita’s entrance continues to rise many questions.  Is this an ode to Patrick Swayze’s rendition of Dirty Dancing?  Because I sense some major sexual tension between Taylor Wilde and Sarita in that entrance.  Is that the vibe they are going for?  If so, then they certainly hit the nail on the head: a lesbian couple in heat doing the tango.  All that jazz and strobe lights – I feel like I’m watching an anime.

In somewhat of a dream match up, Sarita and Tara square off at the start of the match.  As a show of respect, the two share a handshake.  The two lock up and Tara overpowers Sarita with a headlock and a takedown.  Sarita traps Tara between the legs with a headlock of her own.  Tara flips out of the move and covers Sarita, but Sarita bridges out of the pin attempt.  Tara attempts to counter the sunset flip, but misses the front dropkick.  Sarita also misses an elbow.  The two pause for a moment, but Tara goes back in with an arm lock.  Sarita rushes to the corner.  Tara catches her in what seems to be the makings of the Spider’s Web (fireman’s carry into a swinging sidewalk slam), but Sarita brilliantly counters that with a headscissors.

Taylor Wilde makes the tag and lands a diving crossbody from the top.  With an assist from Taylor, Sarita lands a moonsault onto Tara and Taylor capitalizes with a senton for the 2-count.  Meanwhile, the commentators banter about a piece of hair that has inconspiciously found its way into the center of the ring.  All signs point to Tara. (Hmm…did anyone check Slick Johnson?)  Tara grounds Taylor with a powerslam, but Taylor kicks out.  Tara tags in the Knockouts Champion.  ODB with a shot to the midsection, carries Taylor into the corner by the throat.  An assault ensues…

Meanwhile, Awesome Kong makes her way down the ramp, and she has her sights on Tara.  Tara takes the initiative to confront Awesome Kong, and Kong just takes it…I guess.

Back into the action in-ring, ODB covers Sarita, but only receives a 2-count.  ODB catches Sarita mid a crossbody endeavor, meanwhile Taylor Wilde makes a blind tag and takes both her partner and her opponent down with a missle dropkick.  Taylor bridges into a Jackknife pin only for a near fall.  Taylor tags in Sarita.  ODB dodges a double clothesline and takes both Knockouts down.  ODB covers Sarita, but Sarita kicks out rather fiercely.  ODB takes Sarita up for the fallaway slam, but Sarita rolls out and makes the hot tag.

Taylor Wilde braces ODB while Sarita nails a springboard dropkick.  Taylor picks up the win with a German Suplex pin.

Not a bad showing for the Tag Team Champions.  Certain people might object to the Knockouts Champion losing this bout, but considering the circumstance of what became a 2-on-1 match… I think it was acceptable.  Something tells me I’ll have to get used to seeing the new tag champs win – in a good way!  My only concern is the lack of tag competition in the division.  I’d like to see this rectified in a way other than just throwing strange bedfellows together in makeshift teams.  TNA gave us a tag title, now it must give us a tag division.

Backstage in the midst of an interview, Alissa Flash has a bone to pick with Lauren, and subsequently with Hamada.  Alissa’s acting is like night & day in comparison to Raisha Saeed… and not in a bad way either.  This dispute leads to Alissa attacking Hamada and tossing her down a flight of stairs.  Before the assault can go any further, the two are separated by TNA officials.  A face turn for Hamada?  Can’t say I immediately expected that.  A pretty hardcore moment between two very hardcore wrestlers.  This will definitely be a feud to look forward to.  I honestly just want to see both Hamada and Alissa Flash win matches for once.

Oh, and Daffney gets whored out backstage. Rather unfortunate. The elbow to Kevin Nash’s scrotum makes up for it, though.