The Tiffany Guide to Impact: This is a Joke, Right? 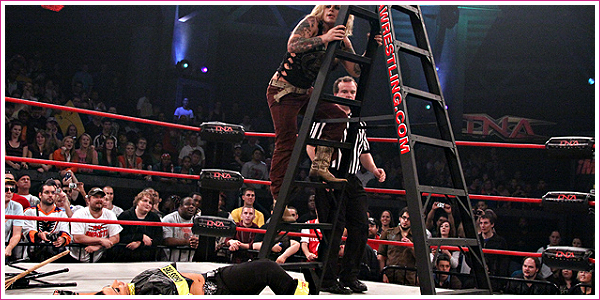 Often imitated but never duplicated, it’s the Tiffany Guide to Impact.  This week, TNA’s creative team takes a nap.  Meanwhile, this week’s episode of TNA Impact is laced with a boost of testosterone that could only be matched by that of Tiger Woods.  First off, we’ll go right ahead and expunge the pink elephant in the room: The Beautiful People (Velvet Sky vs. Lacey Von Erich ft. Madison Rayne) in a mud wrestling match.

I’m on the fence about this “match” purely because any way I go about it, someone’s going to have some reason to complain. Whatever. For what it’s worth, this was a five minute erm… exhibition that went against the grain of most Knockout matches.  Was it raunchy?  Sure.  Is it degrading?  Eh perhaps, for some.  The way I see it: it was a goofy segment that’s better suited to just disappear into the depths of pro-wrestling history.  With the decent overhaul of Knockout action we we’ve been blessed with recently, this one silly Beautiful People segment gets a pass (and a well-received “yawn”).  As long as it doesn’t become a usual occurrence, all should be forgotten soon enough.  It’s not often that Velvet Sky wins a match single-handedly, so it’s best to just enjoy it while it lasts.

Next up, Hamada challenges the TNA Global Champion, Eric Young.

Between the Knockouts’ newfound Diva-esque tendencies and now their disregard for Spike TV’s typical “no male/female violence” rule, I’m forced to re-evaluate what exactly I’m watching here.  Though, unlike the Beautiful People’s segment, this match elicits a good “OMG WTF.”  Between TNA and modern-day WWE, it’s not often that we see an even remotely serious show of competition between a man and a woman on television.  Most intergender matches often have comical, malicious, or sexual intentions.  While anyone could easily predict the outcome of this match, it is a treat to see two known talented wrestlers go at it, regardless of gender.  It is also interesting, I have to admit, to witness Eric Young in a match where he’s not the underdog.

The champion and challenger meet in a test of strength the center of the ring, but the champion is quick to shift the momentum into the corner.  He lets up on the hold and goes the obligatory length to patronize Hamada. Not to be derailed, Hamada charges back into the lock-up, stimulated by the crowd’s encouragement.

Hamada is forced back into the corner, and the champion lets up yet again.  Having clearly let his guard down, Eric Young walks right into a beautiful spin kick courtesy of Hamada, sending him right out of the ring.  Hamada soon follows and continues the onslaught on the outside with a series of headbutts and chops.  The match soon reconvenes in the ring.

Eric Young scurries into the corner as Hamada takes a moment to revel in the crowd’s enjoyment.  Hamada charges into the corner, but Young gets his leg up in time.  This stops Hamada in her tracks, biding Young enough time to climb to the top rope.  As endurable as Hamada is, she rolls right into the offense and catches her adversary with a superkick.  Hamada quickly recovers on the apron, climbs onto the top rope, and delivers a picture-perfect Frankensteiner.  Hamada scrambles into the cover, but the champion gets his shoulder up just right before the count of 3.

Not seemingly discouraged by the near fall, Hamada plants Young with a scoop slam in the center of the ring.  She climbs to the top and flips into her signature moonsault.  However, Young rolls out of the way in time.  Now sabotaged by her misplaced offense, Hamada accedes to Eric Young who uses the ropes to ensure the win.

While knowingly predictable, I thoroughly enjoyed this match.  Sure, it was brief and defied Hamada’s current winning streak, but it was fun nonetheless.  Intergender matches usually always follow some sort of a formula, and I’m more partial to the ones where the female gets the edge.  Last week, I had hoped TNA had something in mind for Hamada that was eccentric.  So, hopefully their experimentation with her hasn’t already peaked.  I’m intrigued as to what is in store for Hamada.

Next in the lineup, Scott Steiner enlists Awesome Kong as his right hand against Bobby Lashley and Kristal.

In all honesty, I haven’t paid much mind to this Scott Steiner/Bobby Lashley storyline due to it being, well… boring.  It’s not unlike anything we’ve seen in pro wrestling.  So, it’s no question that Kristal’s character and mic ability have been the beacon of light through this tunnel of blargh.  Seeing as nothing puts me to sleep quite like a Bobby Lashley promo, I like the idea of having Kristal as her husband’s voice.  I also like the idea of Scott Steiner.  For being, well… Scott Steiner.

Naturally, Kristal doesn’t get that involved ring-wise and doesn’t do much besides fill the quota of the proud wife on the sidelines/damsel in distress.  She catches a beating from Awesome Kong prior to getting mounted by Scott Steiner, but that’s about it.  Well played, TNA.

As if this episode couldn’t get any classier, Tara is set to take on her newfound rival ODB in a “Drunken Street Fight.”  The only prerequisite to this match being that each competitor must liquor herself up prior to it.  Belligerence ensues.  What is usually reserved for Saturday nights on the Jersey Shore is brought to you via TNA programming.

At the start of the match, ODB baits Tara with a bucket, which Tara takes the opportunity to use as a weapon.  ODB rolls out onto the apron, and Tara baseball slides her onto the floor.  Tara continues to take the fight to ODB with the use of various objects until ODB sprays her in the face with liquor.  The Knockouts Champion then wraps her opponent in “Cross the Line” emergency tape, finally putting TNA merch to good use.  Tara’s “OMG OMG” reaction to getting whacked across the back with a cooking sheet mirrors personal enjoyment, moreso than enduring any bodily harm.  Which only solidifies my theory that this is some sort of twisted BSDM exhibition moreso than an actual wrestling match.  Hence, Tara getting “plunged” in her nether regions.

Back into the ring, ODB proceeds to catapult Tara into a steel ladder.  ODB rejects the larger ladder for a wooden, more modest step ladder – by which she climbs and delivers a Big Splash onto Tara.  Fascinating.  Tara kicks out at a 2.

ODB drags Tara into the corner and chokes her with what resembles one of those torches off of Survivor (a hand-me-down/early Christmas gift from Jenna Morasca, perhaps?)  Tara powers out and flips ODB onto her keister.  ODB and Tara follow up into a trash can lid exchange when Tara accidentally flings one out like a frisbee into oblivion.  The assault continues anyway, as Tara finally begins to get the upperhand.  Tara scoop slams ODB onto the mat, places the trash can lid into position, and delivers a standing moonsault onto the champion.  She then attempts to climb up to the top rope but seemingly hasn’t sobered up enough to follow through on her plan.  Yeah.  Okay.

ODB takes advantage and chokes Tara out with a chain link.  With that, she finishes Tara off with a sitout facebuster onto the steel chair.  ODB picks up the victory.  Bleh.

If anything, I think this just goes to show that any which way TNA tries to spin it, ODB vs. Tara just isn’t a winning formula.  This match itself just felt unnecessary, like a gratuitous take on what is considered “extreme.”  I particularly liked how ODB and Tara seem to get drunker as the match went on.  Who knew that getting smashed in the head with various objects took the opposite effect of sobriety?

To be completely frank, this week on Impact was like a joke without the proverbial punchline.  The secondhand embarrassment was almost too much to bear.  We’ve got women fighting men, people rolling around in mud, people jumping off step ladders, trash can lids going awry… It felt like watching a slideshow moreso than usual.  Considering the circumstances, I’m prepared to turn a blind eye and blame it entirely on Kevin Nash.  Failure just seems to cling to that man like a bad quad tear rash.  Hopefully, things will be recovered in time for Final Resolution.  At this point, there’s nowhere else to go but up.