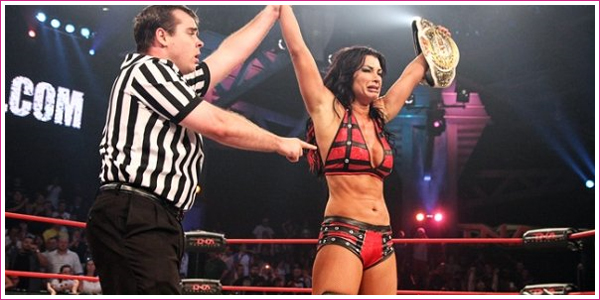 This week on TNA Impact marked a very momentous evening for the Knockouts.

Victoria is set to first take on Velvet Sky. Backstage we find the Beautiful People making their way to the Impact Zone. Velvet seems very upset at the events that took place last week. Velvet holds nothing back in pronouncing just how fed up she is with Angelina Love‘s selfishness ; she puts Angelina in her place as Madison Rayne timidly looks on.

When the Beautiful People make their way to the ring in their typical manner, something very non-typical occurs. The camera man reaches out to fondle poor Vel-Vel, but Velvet is having none of it. I’m not exactly sure why this little random little incident takes place, but I suppose it was only a matter of time before someone tried to cop a feel. Creepy, but funny.

Next, Victoria confidently approaches ring. Her signature tarantula, ‘Poison’ is in tow to level the playing field. Victoria delivers a very steady set of punches to the chest of Velvet Sky, followed by some lunges into the turnbuckle. An irish whip into corner, but Victoria eats the sole of Velvet’s boot. Velvet then perseveres with a clothesline and resorts to her cat fighting expertise again with a choke to Tara.

Velvet insists on more prissy offense before she goes for a pin. When Victoria is hung up against the ropes, Angelina sees this as an opportunity to get the better of her. However, the referee catches her before she can assault Victoria with the Knockouts belt. Unperturbed, Victoria takes down Velvet with a few clotheslines and scoop slam. Velvet puts up a fight but cannot quite wiggle herself out of an amazingly powerful Widow’s Peak. Victoria picks up the win.

Watch the first match below:

Velvet falls under hostage status once again when the Beautiful People suffer dÃ©jÃ  vu at the sight of Victoria’s tarantula. The crowd eggs Victoria on, but before she can proceed, Angelina makes the ultimate decision to come to the defense of her partner this time. So, Victoria gives Angelina a very clever ultimatum: Velvet’s safety in exchange for a chance at the Knockout’s title. Angelina Love gives in. Thus, we have ourselves an impromptu TNA Knockout’s title match.

While Angelina is preoccupied with her precious title, Victoria sensibly opts for a series of roll-ups and near falls. Fairly disturbed, Angelina crawls out of the ring to collect herself. When Victoria tries to pull Angelina back into the ring, Madison drags Victoria out by her feet. Surprisingly, the referee does not call out for a disqualification, but instead banishes Madison from ringside.

Angelina, now all alone, takes her frustrations out on Tara. She pushes Victoria into the guardrail where apparently Victoria’s foot gets stuck and then dislodged. In attempt to instill fear in Tara, Angelina does nothing short of blowing out an eardrum. Back into the match, she goes for the pin, but Victoria kicks out. When the Botox Injection (running bicycle kick) doesn’t cement a win in her favour, Angelina throws a temper tantrum. Though, not to count herself out just yet, she tosses Victoria in the corner. The challenger dodges and strikes the champion with her signature punches. Victoria drops Angelina with a spinning sidewalk slam, but Angelina kicks out. However, Angelina cannot seem to muster getting the shoulder up again when Victoria hits another picture perfect Widow’s Peak and is crowned the new TNA Knockouts Champion.

The crowd goes wild at the dismay of a now distraught Angelina, and even Victoria can’t seem to believe it herself. However, it is a sight for sore eyes to watch Victoria hold her newly-acquired success high above her head for the world to see.

Backstage, Lauren celebrates with Victoria who confides in her Poison, “We did it, baby!”

Watch the title match below:

I thought this was a very interesting and clever set up for the match. I wasn’t sure where they were going with it at first, but was very pleased with the result. Velvet scolding Angelina at the start, I feel added a whole new dynamic to the team. Velvet Sky has always been a diplomatic and supportive half to Angelina, and it was interesting to see her call the former champ out on her crap. Having Angelina barter her championship to save Velvet was really brilliant, as well.

There seems to be a rift between those who think Victoria winning was ‘too soon’ and others, like me, were confused as to why this didn’t take place at the last PPV. I now feel urged to switch gears and confess that this was as great a time as ever. The set up was amazing prior to the title match, and the anticipation of wanting to see Victoria get the victory just added to the excitement of the contest. The build-up was very well done.

As for Victoria winning the championship, it was a very proud moment for those who’ve yearned to see Victoria finally re-utilize the incredible abilities she has always possessed. Amazing showing by both ladies, but the jewel on the crown was definitely seeing Victoria cradle that championship in her hands in the middle of the six-sided ring. Yet another historic achievement. As Victoria, herself, put it so aptly, “We did it!”