The Tiffany Guide to No Surrender: Knockouts History Is Made… Again! 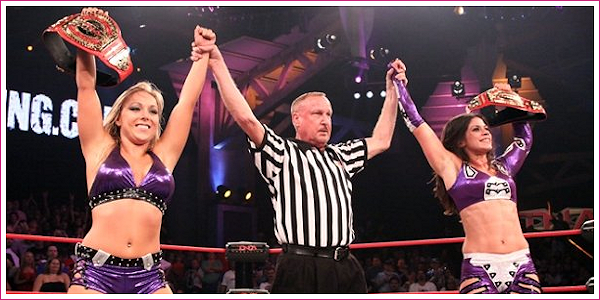 Saritaylor debut some new music and a new entrance.  It isn’t any better, but hey it’s different.  In all honesty, now they really just look like a hot-n-heavy couple doing the tango.  Keep trying ladies, I’m sure you’ll get it eventually.

Tazz continues to spoil the outcome of the match (like he has done from the very beginning of the tournament), but it’s not like the result wasn’t utterly predictable.

The Beautiful People make their way to the ring in such a ridiculous manner that makes me absolutely miss Angelina Love.  Call me crazy, though I prefer “incredibly loyal.”  There’s no TLC without Left-Eye, there’s no Alice in Chains without Layne Staley, and there sure as hell ain’t no Beautiful People without Angelina Love.  Wherefore art thou, Love?  This entrance isn’t nearly the same without you.  Bleh…I guess I’ll just have to settle for this Knockout knockoff for the time being.

Mike Tenay hits the final nail in the coffin by mentioning Angelina Love’s release onscreen, which makes it “legit” in some way.  He even pulls the “future endeavors” line…which, as everyone knows, is the wrestling version of “Rest in Peace.”

Earl Hebner and his (oddly fitting Nazi-authoritarian) mustache assert themselves as the officiator to this match, playing off of Slick Johnson’s past history with the Beautiful People.

Sarita and Taylor Wilde waste no time in starting off the matchup.  Madison Rayne is sent to the outside while Taylor Wilde basically slams Sarita on top of Velvet Sky, in quite an unique showing of offense… if I do say so myself.  Velvet Sky kicks out.  Sarita maneuvers a brief headlock into an armlock into a series of pin attempts.  Madison breaks up the count, however, during.  Taylor forges a tag and takes advantage.  She and her partner take down Velvet with a double back elbow, and Sarita elevates Taylor into a moonsault for the 2-count.  Tsk tsk…that’s cheating, ladies.  Old Hebner knows no difference as Velvet tags out to Madison Rayne.

Taylor effortlessly breaks down Madison with a drop toehold and an elbow.  Sarita makes the tag this time and delivers an elbow of her own.  Sarita is whipped into the corner and suffers a sudden burst of gonash from miss Madison, resulting in a near fall.  Madison is perplexed, as she is not used to arguing with referees.  Madison takes Sarita into the corner, who endures a few kicks to the midsection.  Madison tags out.  The Beautiful People attempt some tandem action with a double straight jacket neckbreaker.  Velvet makes the cover, but Sarita kicks out at 2.  Velvet doesn’t go apeshit just yet.  Instead, she bides her time with a couple mat slams.  Velvet tries a sunset flip, but cowers out of it, avoiding a dropkick in the process.  So much for mat initiative.  Eh.  Velvet puts the boots to Sarita, but Sarita kicks out at 2.  After a modified curb stomp to the throat, Sarita kicks out again.

Madison tags in and puts Sarita in a headlock and then drops into a spinning neckbreaker for the 2-count.  The Beautiful People continue to cut the ring in half with the quick tags.  Velvet becomes a bit overzealous, allowing Sarita to recover amidst a float-over DDT.  Both competitors make the hot tag out to their respective partners.

Madison runs into a dropkick and a rollover fireman’s carry slam, as well as a swift backbreaker.  Taylor tries to ensure a victory for her team, but Velvet Sky breaks up the pin.  For the finish, Sarita lays a springboard dropkick onto Madison Rayne who is subsequently taken down with a German suplex for the win.

Next up commences a battle of the sexes for the TNA Knockouts Championship.

An overly friendly fan cops a feel as we prepare for the TNA Knockouts Championship match: ODB vs. Cody Deaner.  Give’r!

At the start of the match, ODB uses Cody Deaner’s attire as toilet paper and Deaner threatens to… “backhand” her.  Okay…

ODB avenges this with a series of seemingly stiff shots to the Deaner.  Deaners rolls out to the outside, and ODB follows up with a crossbody from the top rope.  ODB leads Deaner back into the ring and into the corner.  Deaner takes ODB down and continues to dominate for a considerable remainder of the match.  The turnaround in the competition comes when Deaner attempts a top rope move and his halted by a low blow.  The back-and-forth action continues until Deaner attempts to steal a win with his legs on the rope.  A couple pin attempts later, and ODB reverts the match back into her favor with the TKO for the win, solidifying her place as the official Knockouts Champion.  Took long enough, huh?

ODB boasts to Lauren about her victory, which I guess is the TNA equivalent to the Women’s Rights Movement.  Just another comedy sketch match, folks.  Nothing to see here.