The Tiffany Guide to Slammiversary: Ding-Dong the Witch Ain’t Dead Just Yet 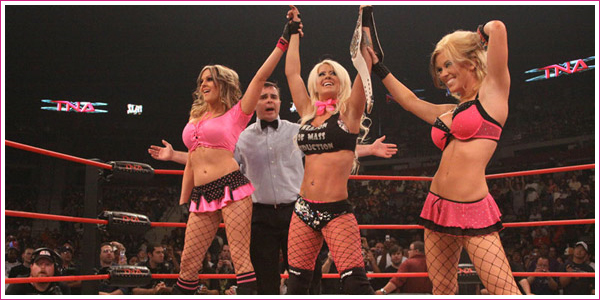 For all intents and purposes, the Knockouts Title match between Angelina Love and Victoria (Tara) failed to properly live up to the hype and positive development surrounding Tara’s highly anticipated debut. It wasn’t, however, a wasted effort (imagine your mother’s matronly voice telling you that she’s not mad, just ‘disappointed’). While the aspiration seemed to be there, last night’s match just did not live up to the quality of work I’d expect from either competitor.

While we here at Diva Dirt were correct in predicting the outcome of the match, ayone who has ever prayed for brighter days in the women’s division would have hoped for a better showing of Tara’s experience and Angelina’s abilities. Now, we were not a complete loss as this was not a bad display by either lady. However, just as Tara begins to build momentum at the very start of the match, an interference from the Beautiful People occurs, which is to be expected in a match of this caliber. Velvet Sky and Madison Rayne make due of their purpose to keep the competition in Angelina’s favour with the help of good timing and negligent officiating. Though, not before Tara hits a snapshot-worthy spinning backbreaker on the Champion. Tara neglects a pin attempt for a piece of the Bratz dolls. Before long, many calculated attacks are exchanged between Tara and Angelina’s lackeys, which consequently takes away from the entire feeling and purpose of the match. At some point, it seems as though Tara makes a costly decision to eliminate outside interference by taking out Velvet and Madison, but wastes precious time in which she could have become champion. In the end, the heelish advances pay off when Tara receives a mouthful of proverbial hair spray and a devastating kick in the face for her troubles … and for the finish. Angelina lives another day, another accolade, as your reigning TNA Knockouts Champion. You like her, you really like her?

With Angelina retaining the Knockouts title and Awesome Kong slowly being pushed back into the title picture, the possibilities regarding the division have rendered themselves endless. Though, I wouldn’t count Tara out yet. This match just screams ‘stepping stone,’ and an apparent ‘holding back’ for greater things to come. Whether or not she will eventually earn the belt still seems to be without question. I’m not sure what kind of game TNA is playing here, but seems to revolve around specific timing and circumstance.

Thoughts on the Monster’s Ball & video after the cut:

The mixed tag team match, on the other hand, did not disappoint. In some ways, it even overshadowed the Knockouts title match. For weeks, while Abyss’s unique involvement with Dr. Stevie had begun to unravel, both Taylor Wilde and Lauren continued to be victimized by a highly vindictive and disturbed Daffney. This led to some interesting interaction between the two parties and a concluding match at Slammiversary that followed through on its promise of both shock value and exclusive personal history.

It’s always a treat to see female wrestlers mixing up with the men, though some of us feared the Knockouts would have a difficult time finding their way in this match-up. Contrary to that prediction, Taylor managed to pull off some impressive spots (i.e. leaping off the sound system) while Daffney took some convincingly nasty bumps with as much vigor and intensity as she always does. The dumping of Daffney onto the pool of tacks was the defining Knockouts moment in this match. To the delight of many gore-ethusiasts, the reprisal of Dr. Stevie and his disciples came very soon. This match is typically bloody, brutal, and hokey to the acclaim of any sado-masochist dedicated hardcore fan.