The Tiffany Guide to Turning Point: A Means to an End 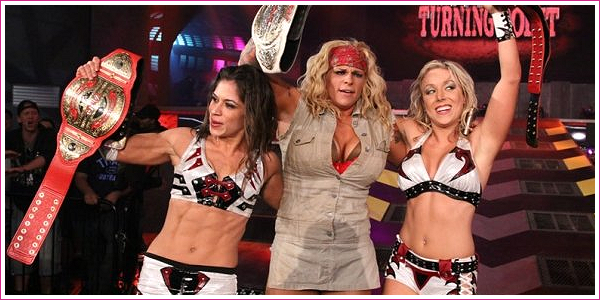 Setting women’s relations back faster than Tila Tequila and the Home Shopping Network, the Tiffany Guide returns just in time for yet another TNA PPV!  With the same quality you’ve come to expect, and the unbridled TNA commentary you’ve come to enjoy.

Good appeared to conquer all evil last Sunday night at Turning Point.  First in Knockout action sought the Beautiful People (Madison Rayne/Velvet Sky/Lacey Von Erich) vs. ODB, Sarita, and Taylor Wilde with all titles at stake.  Of course, what would a TNA match be without some complicated stipulations?  If ODB is defeated she loses her title; if Saritaylor is defeated they lose their titles.  Simple enough, right? I suppose this is the part where I go “TNA rulez!  WWE droolz!” or something to that effect…

The Beautiful People make their way to the ring looking very shiny and, erm… accessible. Before the sound of the bell, we are treated to even more gratuitous ass shots courtesy of Mi Pi Sexy – to bring even more credibility to this bout, of course.

Taylor Wilde and Velvet Sky kick off the match with a lock-up.  The referee tries his best to cop a feel while Velvet takes her aggression out on the Wilde one.  The ever-confident Velvet is distracted long enough for Taylor to trip her and drag her to the opposing side.  Tags alternate among the babyfaces as they all seem to take particular interest in Velvet’s nether regions.  ODB mounts her opponent, but Velvet says neigh.  Velvet powers out and leads ODB into her corner, tagging in her partner Madison Rayne.

Madison takes a break to indulge in a bit of self-admiration.  As per usual, Madison proves her salt personality-wise.  There is a way to be cleverly gimmicky without being overly gratuitous, and Madison masters that quite brilliantly.  Her beautiful partners should take note.

Madison’s exhibition buys ODB enough time to recharge and tag in Sarita.  Sarita outsmarts Madison with a series of flashy predicaments.  She then makes the tag out to Taylor, who she then assists into a moonsault onto Madison (rather flawlessly, if I may add).  However, Madison kicks out at 2.  Taylor draws her into a clutch and sends her down with a springboard arm drag.  Before she can even begin to capitalize on said move, Lacey Von Erich blindsights her with a clothesline.  Cue a very convenient wide-angled shot of a fan in the front row holding a “Lacey Von Botch” sign.

Madison regains control of the match with a swinging neckbreaker onto Taylor Wilde, but Taylor kicks out at 2.  Velvet Sky requests a tag and makes the assist into a double reverse DDT.  Taylor attempts to escape, but Velvet mounts her with a few punches and a very suggestive cover.  Taking a moment to tease her competition, Velvet flattens Taylor with a stiff kick to the back and a running front dropkick.  Taylor kicks out yet again.

There it is: the moment we all awaited with bated breath… Lacey Von Erich gets tagged into the match. Less than 5 seconds transpire before Lacey is subjected to the thoughts of the mass majority of TNA fans (and perhaps that of even Lacey herself) in the form of “You can’t wrestle” chants.  Lacey quickly exits the ring; the scent of defeat is almost too rancid to ignore.

Velvet gets her second chance in on the action by which she traps Taylor in an Octopus stretch.  Meanwhile, she bites the trapped arm out of the referee’s line of sight.  When Velvet attempts to shift the maneuver a sunset flip, Taylor runs (or rather trips) into Velvet’s face.  Hilarity ensues.

Both ladies make the hot tag.  ODB charges into the ring, taking out the legal woman Madison.  She also takes down Lacey Von Erich, which gets a rather positive reception from the audience.  Leading Velvet into the ropes, ODB catches her in mid-air and drops her with the fallaway slam followed by a kip-up.  ODB goes for a cover, but Lacey breaks up the pin.  Sarita and Taylor take exception.  However, in their effort to clear the ring of the excess plastic, they are sent out to the floor.  This gives the Beautiful People an opportunity to set ODB up for a potential double team move.  Instead, ODB overpowers their advances and takes Madison Rayne out with the TKO for the 3-count.

Somewhere during the 3-on-1 attack against ODB, a few of Lacey’s hair extensions fall out.  One piece even finds its way into the hand of a lucky fan in the front row, who takes the liberty of twirling it around like a prize.  Lacey then does something that will possibly put her my good graces for all of eternity.  She stuffs a piece of her lost extensions down her trousers and does a little hoe down.  From what we’ve seen in the past, Lacey is a master at not taking herself too seriously and being able to laugh at herself.  As embarrassing as weave-tragedies can be, that purely awesome act alone almost defuncts any and all of my criticisms of Miss Lacey.  Key word: almost.

While the outcome was predictable, all in all, I thought this was an impressive match.  If an MVP had to be chosen, my pick would definitely belong to Madison Rayne.  Madison has come leaps and bounds since her first run with the Beautiful People.  Ever since the departure of Angelina Love, Madison has been able to exude personality and charisma. Ever since Angelina left, people supposed the leader position would fall under Velvet Sky or even Lacey Von Erich.  However, I think Madison stands out as the one with the best balance between wrestling ability and temperament.  That being said, I don’t imagine it will be over between the Beautiful People and Saritaylor.  Velvet and Madison don’t strike me as the type that will rest until the belts are finally around their “pretty little waists.”  As for Lacey?  Well… between the Kong hug attempt and the weave fiasco, it’s safe to say that she is entertaining in her own right.  Just keep her in the background, and I will be content. After all, we’re overdue for another Botchamania.

Next up, in the long-awaited steel cage match, we see an end to World War III aka Tara vs. Awesome Kong.

In a lulz-worthy turn of events, Tara approaches the ring in a Kongbuster T-shirt.  (I can only imagine the laughs Tara and Kong must’ve had backstage.)  Kong enters the cage next and wastes no time charging into Tara and pinning her into the corner.  Kong and Tara exchange blows, and Tara attempts to manipulate Kong with her speed.  She succeeds when Kong tries to sit on her but misses.  Tara begins to take the fight to Kong yet again, but Kong steps on the brakes before Tara can take advantage of their surroundings.  Kong goes for a spinning backhand but receives a handful of steel instead.  Tara takes advantage of this misstep by slamming the injured fist into the steel wall repeatedly.

Tara tries to find a way out of the cage, but is instead caught on top of Kong’s shoulders and is taken down with the Electric Chair.  Awesome Kong then tries her hand at scaling the cage, but this time, Tara stops her in her tracks.  Knocking Kong down onto the top rope, Tara goes for what could be a super hurricanrana, but she is shoved down.  Tara begins to regain herself, but walks right into a front dropkick a la Awesome Kong from the second rope.  This results in a near fall.

Kong, in minor disbelief, proceeds to toss Tara around like a ragdoll.  She slams into Tara, using the steel wall as her vice.  Tara endures even more abuse for a good portion of the match.

There appears to be a blown spot when Kong takes Tara into a suplex position against the steel fence, which we later discover is supposed to lead into a DDT counter.  The two ladies attempt the spot again, this time successfully.

When both ladies make it to their feet, Kong tries for the Implant Buster, but Tara counters.  The match seems to work in Tara’s favor as she lands a standing moonsault onto Kong, but Kong kicks out.  Tara decides to scale the cage, but Kong is hot on her trail.  They exchange blows on the ropes, but then both crumble onto the top rope.  The exchange persists until Tara is knocked off onto the mat.  Kong braces herself against the fence as she calculates her next plan of action.  Tara promptly recovers, finding the strength to powerbomb the near 300 lb Knockout from the second rope.  Tara appears to have this thing won, but Kong gets her shoulder up at the last second!

Awesome Kong stirs while Tara tries to find her best way out of the match.  Tara scales the six sides of steel, yet this time, she stalls at the top.  She awaits Kong’s arrival and then mounts her with a huge crossbody from the top and for the 3-count.  Tara wins the match.

As long-winded as this Tara/Kong feud has been, this match was exciting for what it was.  The crowd was into it.  Not to mention, it’s always a treat to see talented female competitors get a chance at more hardcore male-oriented matches.  In the grand scheme of things, the David-Goliath story never gets old.  Though, Kong seems to always be at the losing end of it.  Nonetheless, this was a mighty win for Tara – one that I hope will catapult her to finer things in TNA.  And to think, just a few months ago she could barely get past Angelina Love.