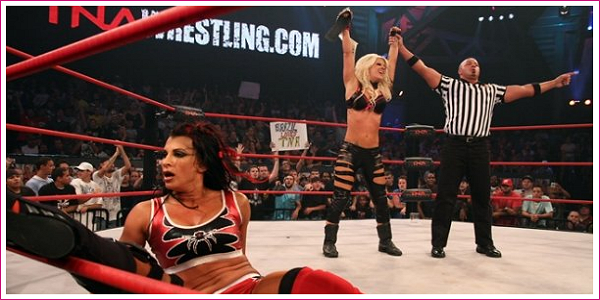 This year’s installment of Victory Road pitted Angelina Love against the Knockouts Champion, Victoria as well as Sharmell vs. Jenna Morasca.

First up is the Knockout’s title match. With the women’s title match being this early on card, don’t know whether to be grateful or plead for mercy.

As the Beautiful People make their beautiful way to the ring, I’m pleased to see Madison Rayne actually doing something in their entrance, even if it’s just shaking her ass. It’s even refreshing to see Angelina out of beekeeper’s suit, even if her pants look like they have gotten into losing battle with a shredder. Oh, and Velvet Sky prances around in lingerie. What else is new? Anyway, I won’t make any mention of Madison’s lean against the ring ropes as doing her best thinking on her back… because that would be inappropriate.

Victoria enters the Impact Zone with Poison by her side and the title held high above her head. At very sound of the bell, Velvet attempts to taunt and distract Victoria. Unperturbed, Victoria takes Angelina Love down and slams her a couple times. This is too much to handle for Angelina who calls for a time-out. Before the challenger can even catch her breath, Victoria pulls her back into the ring. Victoria then proceeds to support Angelina’s weight on her own back while pulling on her hair before slamming her down onto the canvas. Following up with an irish whip to the corner, Love counters but falls into a tarantula manuever against the ropes.

Victoria breaks the hold and gets involved with the Beautiful People, only providing Angelina with the opporunity to score a baseball slide. Just like that, the fight is taken to outside. There are shadows of their last match when Angelina shoves Victoria into the ring apron. Back into the ring, Angelina performs a running dropkick. She then runs Victoria into corner repeatedly. Tossing Victoria down from the turnbuckle, Angelina even finds time to gloat about it.

However, Victoria fights back and whips Angelina Love into the corner. Angelina follows up with kicks to the side of Victoria’s head and a diving clothesline. She goes for the pin multiple times, but is unsuccessful. With similar offense in mind, each Knockout takes her opponent down with a clothesline. Referee Slick Johnson administers a 10-count. Victoria surprisingly musters enough energy to kip-up and soon lead Angelina into a flapjack. A standing moonsault on behalf of Victoria renders a 2-count.

Velvet Sky takes to the ring apron. When the Beautiful People attempt to set Victoria up, Velvet accidently sprays hairpray in Angelina’s eyes. The referee gets so distracted and preoccupied with Velvet and Madison that he abandons what would otherwise be a 3-count against Angelina.

Victoria hits a spinning sidewalk slam and makes her way to the corner, stepping on Angelina Love in the process. She misses a moonsault from the top rope. Taking advantage of this, Angelina goes for the pin. Referee Slick Johnson does not see Victoria’s foot on the bottom rope and crowns Angelina Love the new Knockout’s champion.

A disgruntled Victoria superkicks the referee and even fits in a widow’s peak on the new champion. Angelina is pulled to safety, leaving only the referee to suffer Poison’s wrath. In a backstage segment, Madison Rayne is seen exiting a shower stall just after referee Slick Johnson. It is apparent that some form “persuastion” was utilized to guarantee Angelina’s win. So, forget my last comment about Madison on her back. She can do it standing up, as well.

Honestly, the outcome of this match took me for a spin. The Beautiful People were right by calling Victoria’s win as a fluke, sadly. I don’t want to jump to conclusions and say that Victoria’s title reign was entirely pointless, seeing as I have no idea what TNA may have in store for this feud. I will say though… that it doesn’t make any damn sense. It is only sensible that if TNA was looking to further pursue this feud, they should have either held off in having Victoria win the title on Impact or should have waited to allow Angelina to win the title back. Even perhaps at the next PPV? Sure, feuds are all about exciting twists and turns of events, but I can’t help but feel a tad misled in that aspect. It’s obvious that TNA tried to pull a fast one on us and TNA succeeded. Perhaps, not to its own benefit. Does anyone truly see the point of having Victoria blow all of her momentum? Somewhere, the WWE higher-ups are laughing.

You thought that was bad? Commence with the utter failure after the cut:

For the start of the Sharmell vs. Jenna match, we get to watch Jenna prance around dressed as Tarzan’s Jane and Sharmell wrestle in an evening gown. The words “are you kidding” have just entered my mind, but for the sake of this review, I will try my best to go into this with an open mind. Oh dear, this is really going to happen, huh?

For the majority of the match, Sharmell dominates Jenna as Sojourner Bolt and Awesome Kong look on. Jenna is a little timid and slow, but admittedly, she doesn’t too bad. Hell, she’s already better than Maria.

Sharmell shows some viciousness by slamming Jenna’s head against the mat a couple times. She consults her guidance, Sojo, for a moment before going back on the offense with a brief camel clutch. Sharmell breaks the hold before irish whipping Jenna, who counters with a cross body. Though, Sharmell regains control and continues the punishment by stretching Jenna by the hair. Jenna opts to run the ropes, but Sojo trips her. A protective Kong goes after Sojo, but this distraction opens a door for a tandem attack on Jenna. Sharmell goes for the pin with no success. After enduring a few kicks in the corner, Jenna fires back with some dispassionate child’s play.

Damn, watching this match has made me more appreciative of, well…actual wrestlers. Watch closely, I’m pretty sure I saw a guy in the first row turn his back to the ring in protest. However, my interest is piqued when Jenna begins to twirl a large chunk of Sharmell’s weave in her hand. Sojo takes offense but is knocked off the apron for her troubles. Sharmell begs for her hair back, but Kong knocks her out. Jenna then sits on Sharmell’s face for the win. …I’m not sure what I just watched, either, folks.

Jenna expects Kong to carry her Tarzan-style, but Kong knocks the Survivor down a peg or two with a big splash. Thank you, Kong. Now if only she could put me out of my misery.

I have to say, the only true redeeming quality of this match was seeing Jenna pull Sharmell’s tracks out. TNA, I am not amused.

I guess with balancing an actual Knockouts contest with the smut, TNA found a happy medium. Just not one I can proudly stand behind. Between the choice of reviewing these matches and enduring an Awesome splash, getting squashed by Kong seems like the lesser of the two evils.

TNA, you’ve given us Victoria as champion, you’ve even treated us to a fantastic match between Sarita and Alissa Flash. But last night, TNA you failed, miserably.

That being said, I look forward to the debut of Ayako Hamada to redeem the filth I have just been subjected to. Because not even TNA can screw that up!