The Week in Fashion: Best & Worst Dressed for August 8th 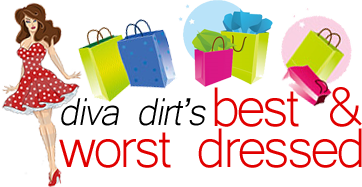 It’s a staple of tabloid magazines: hard hitting, investigative & highly entertaining! Best & Worst Dressed lists can make or break careers in Hollywood and for a site with ‘Dirt’ in the title, it’s only fitting we take this time tested feature & apply it to our Divas! Each week we’ll bring you the best and worst looks from the week gone by, it’s pretty simple right? 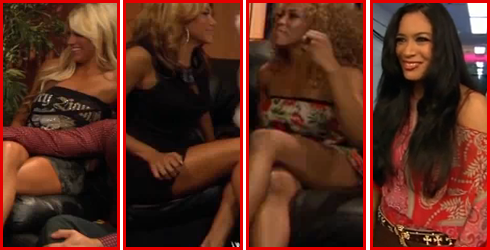 This week saw some cute outfits from the Divas who didn’t wrestle, including a trio from Raw and one from SmackDown.

Kicking off with Kelly Kelly, complete with Jeremy ‘Mercury Poisoning’ Piven’s arm over her lap. Yes, it looks like a poser-y Juicy Couture dress but what else to expect from young K2? It still looks pretty good on her. C

Raw’s Rosa Mendes knows black is her colour and looked hot from the tiny side glimpse we saw of her. Those legs! C

Adding some colour t0 the room was Alicia Fox, in a flowery strapless dress. It’s probably the weakest of the three looks but it was decent by Diva standards. C-

Former Women’s Champion, Melina sure does love the off-the-shoulder look, huh? Nonetheless, I liked her ethnic patterned red top, it reminds me of my mom’s native Morocco. C

This week’s ‘Worst’ after the cut: 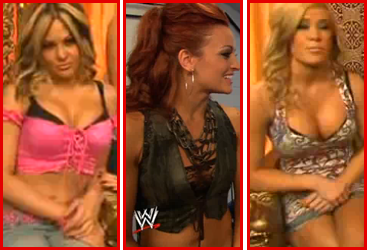 With the good comes the bad and sadly for this crop of Divas & Knockouts, they fell short of reaching an acceptable Diva Dirt standard. Apologies to these girls but if they’re reading [which they likely aren’t] consider it a challenge to make it to our ‘Best’ list next time!

Honestly, I’m susprised I haven’t gone for the Beautiful People earlier in this feature. Granted, it’s not as bad as their usual wrestling gear, Velvet Sky still looked trashy with her bra straps on show while the obligatory hot pink top looks like it’s in child size. Progressively worse.

SmackDown Diva Maria is pretty much a permanent fixture to this side of the list, but there was something a little more hit-and-miss this week than the usual total miss. I liked the look she was going for but it failed in execution, the dark green waistcoat look could have looked hot if it was larger [again another case of ‘child size’]. Meanwhile, I don’t even know what’s going on with the chains or whatever that was. The Maria grading scheme: slightly better than last week.

Fellow Beautiful Person, Madison Rayne didn’t look too great in her also undersized dress, though she was sitting down so that could make it look like it’s shrunk. Then there’s the overtime with the pushup bra…

That’s all for our Best & Worst Dressed list! As with all things Diva Dirt, you can have your say in the comments. Anymore fashion dos and don’ts you’d like to bring to our attention? Want to add in your own critiques? You know what to do!