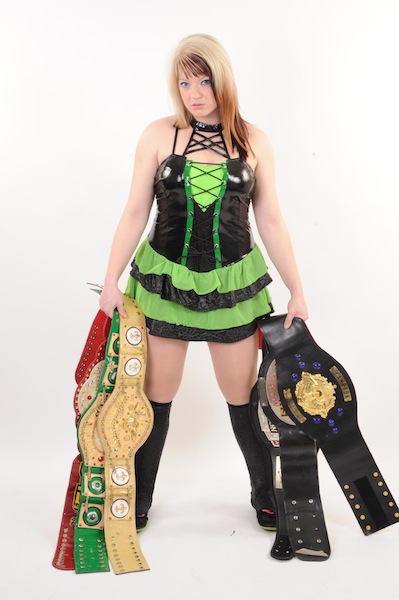 It’s pretty daunting to pack up your entire life and move half way across the world, but when the rewards include becoming the first foreigner to hold one of the most prestigious belts in wrestling, one can safely say that Hailey Hatred made the right decision.

Hailey Hatred has been in the wrestling business for nearly a decade, initially making her name in the early days of ChickFight as well as competing for promotions such as Absolute Intense Wrestling, however, unlike most, Hatred never had aspirations to one day join WWE or TNA, instead she dreamed of wrestling in Japan and Mexico, and becoming a world-traveled superstar. After living in Mexico and various tours of Japan, Hatred finally packed her bags and moved to Tokyo in 2010.

This year, Hatred put herself on the map by becoming the first American female in quite some time to truly say she has cracked the renowned world of Joshi Puroresu, perhaps the most respected form of women’s wrestling today. Making history as the first “gaijin” (foreigner) to win the JWP Openweight Championship, the oldest and most coveted championship in Japanese women’s wrestling, Hatred has cemented herself in the history books. Hatred would also be the first woman to take the title outside of Japan, defending against Cherry Bomb at AIW.

Being accepted into the Joshi world is no easy feat, but Hatred has more than made her mark and her success in Japan has arguably made her an even bigger star in her native America, where she received much fanfare in her homecoming as she debuted for SHIMMER and returned to AIW.

Holding an inimitable six championships at one point in 2011, Hailey Hatred is arguably 2011’s biggest success story. She has shown that you don’t need to vie for a WWE contract to be successful. In fact, Hatred’s rise to stardom in Joshi Puroresu seems to be ushering in a new wave of American imports looking to live and make a name for themselves in Japan.

Though she just recently lost the JWP championship to Tsubasa Kuragaki, Hatred can hold her head high for her incredible year. We hope that more fans will discover and follow Hatred, a shining representative for North American female wrestling, in 2012, also.

In a history-making year, Hailey Hatred has become one of the most important women in wrestling.