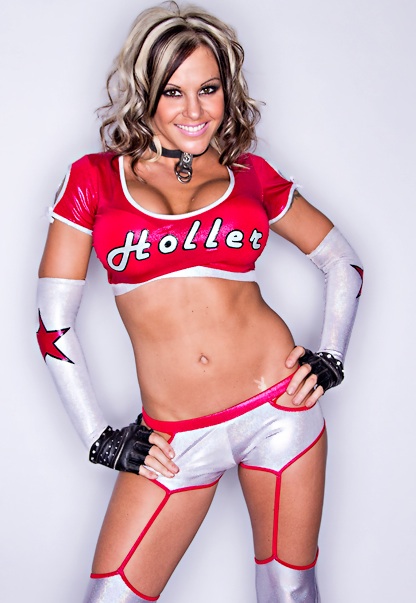 Everyone loves an underdog and for the past four years, Velvet Sky has been TNA’s underdog Knockout, a consistent force in the division while others were let go, quit or were injured, yet she’s watched on the sidelines as others have won the Knockouts Championship before her. This year, it was finally her turn and though the moment was fleeting, Velvet’s journey to the Knockouts Championship was perhaps female wrestling’s best underdog story this year.

Since the beginning of 2011, Velvet has been as regular a fixture as a Knockout can be on Impact Wrestling, featured in several storylines, each with a similar theme: Velvet was the poor underdog pitted against meaner, tougher Knockouts. In the early part of the year, Velvet feuded with Sarita, losing a strap match before putting her career on the line against Sarita on Impact. Velvet would win, finally defeating Sarita, however, would then have to turn her attention to the growing relationship between Angelina Love and Winter. The mysterious Knockout finally broke apart the Beautiful People, controlling Love in a trance-like state. As the feud continued, Velvet would be forced to face Winter and Angelina in a two-on-one match, further cementing her as a valiant underdog as she scored the victory.

In the summer, ODB and Jackie would return to TNA, attacking Velvet and deeming her the reason that they previously lost their jobs with the company. The feud would continue over the course of the next couple of months as Velvet defeated ODB and Jackie in a two-on-one match that would kick them out of the company. The pair didn’t hold true to their promise, however, and soon returned to attack Velvet again. Velvet snapped, and in a turning point in her TNA career, acknowledged her underdog status in a gutsy promo, and from that point, became a much more determined competitor, setting her sights on the Knockouts Championship.

After much anticipation and a rivalry with Knockouts VP Karen Jarrett, who vowed that Velvet would never win the Knockouts Title, Velvet finally reached the top of the summit, winning the Knockouts Championship at TNA’s biggest pay per view of the year in October.

However, Velvet’s reign would be short lived, as she lost the title just a month later to Gail Kim and has seemingly dropped off the radar despite being so consistently used over the course of the year.

If Velvet’s story arc this year were a movie, it couldn’t have been better written. Velvet’s months long journey to the championship, overcoming obstacles in the form of bigger, stronger, badder foes to get to her goal is one that we can all relate to. Though not the best wrestler in the division, Velvet has always been one of the most popular and is one of the most talented on the microphone. This year, Velvet was thrown a lot of storylines and more than rose to the challenge. It’s disappointing, however, that after a year long build to her winning the Knockouts Title, Velvet lost the belt so quickly and almost vanished into thin air. 2011 could have been Velvet’s year, but ultimately, she (through no fault of her own) fell short at the last hurdle.

It’s easy to underestimate what Velvet brings to the table in TNA amongst the likes of Madison Rayne, Mickie James and Gail Kim, but Velvet continues to be the inspiring, valiant runt of the litter that fans root for, and has earned a place in the fans’ hearts this year.