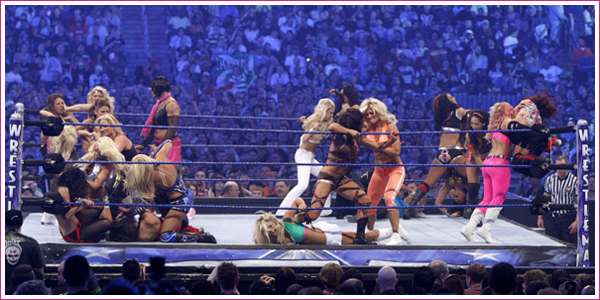 Depending on who you ask, WrestleMania 25 was either OMG-I-soiled-myself-bad or batshit-crazy-horrendous. And that’s just the Divas standpoint. If you ordered WrestleMania to see Undertaker and Shawn Michaels, you most likely went to bed satisfied. If you joined us for our live blog last night, the reaction was almost unanimous as the Divas battle royal got started – there was shock and there was awe. I was utterly speechless for nearly 5 minutes last night.

I could turn this into a rant with loads of effing-and-blinding, but I choose not to. More than sixty of you have already made it obvious that last night was just horrible. So instead, I’m going to look back specifically at all the parts where it went wrong.

Let’s be honest, WWE isn’t going to respond to disgruntled fans shouting their heads off. Nor is WWE going to respond to this here blog. But for the fans, the critics, the Divas and anyone else who reads Diva Dirt, I want to pinpoint what WWE did wrong so that you will get a clear picture of just how debilitating this is to the women’s division.

I hate to say it, but last night’s ‘match’ had me yearning for the Playboy-themed matches of yore…

Let me convey something to you straightaway, my issue is not with the match and not with the talent involved. My issue is with WWE’s piss poor handling of the match. So with that said, let’s play a game of “Spot the problems”…

Starting with the unceremonious filing in of the Divas, this match started off at the bottom of a slippery slope. As glorified dancers for Kid Rock, we have the Divas coming down the ramp as WWE successfully managed to tackle the obstacle of having 25 entrances. From day one, I knew this would be a problem for WWE – how are you going to have 25 entrances? In a way, this tackled that problem in a way that made sense in context but I thought it was pathetic to brush all the Divas with the same stroke. I would have had most of the Divas make their way down to the ring, dancing to Kid Rock but I would have saved some for their own entrances. Surely, the Women’s Champion, Melina deserves an entrance? Surely, the Divas Champion, Maryse deserves an entrance? Beth Phoenix? Michelle McCool? Gail Kim? And then there’s the returning Divas. You’ve got legends like Sunny, Molly Holly, Torrie Wilson and Victoria. Surely they deserve an entrance? Having a handful of the Divas get an entrance would have worked. Instead, we get a clusterfuck preluding to another clusterfuck. You could barely tell the Women’s Champion from freakin’ Eve Torres. You could barely highlight a returning legend, like Victoria from a Bella twin.

And then from there, the proverbial greasy pole is just too much to clutch onto. Starting the match straightaway? What?! As soon as they cut away from Kid Rock, you go to the ring and they’re already going at it? How lovely for the television viewing audience that has paid $55 for this crap. You don’t even have the decency to let them stand around and wait for the bell.

Going into this match, I knew it would be a trainwreck. You got 25 Divas in the ring, it’s not going to be pretty. I had no idea where to avert my eyes, I had no idea what I was looking at. That was expected but what was not expected was the complete inadaquecy of the announcing team. The announce team that is there to guide us through the match, had no idea what was going on themselves and I was left feeling I had no idea what was going on. Surely, there must be someone in the back that can feed them facts and stats about who’s in the match? They didn’t even know Molly Holly was there or Sunny. They called Gail Kim, a Bella twin. They didn’t know Torrie Wilson was out on the floor in front of them until she got up. If the announcers don’t know, how are we supposed to know?

The absence of Trish Stratus is absolutely, positively glaring. From day one, when they first concocted this match, they were delivered with setback after setback. All the top Divas that have ever wrestled for them, said no. So come WrestleMania, we’re stuck with Joy freakin’ Giovanni. Are you kidding me?! I would sooner stick Lilian Garcia, Stephanie McMahon or Vickie Guerrero in that match. Her involvement was an absolute joke. Though I can’t say it hurt me too bad, since I didn’t even spot her in the match. I’ve said it time and time again, if you don’t have Trish booked and ready to compete, why even go the route of bringing back past Divas? Not having her there just added to the already stank aura.

This match from conception to execution has been made of fail and more problematic than one could ever wish. I’m not sure what their reasoning was to have this match in the first place, other than to give all the Divas a payday. But do they all really deserve a WrestleMania payday? What happened to the days of having to work your ass off, being involved in good storylines to earn your spot at WrestleMania? It’s such a slap in the face of the likes of Melina, Maryse, Beth, Michelle, Mickie and even a few others, who bust their asses to work hard and perfect their craft. These Divas dream of being Women’s or Divas Champion, they dream of competing at WrestleMania for those titles. But no, let’s not reserve ‘Mania for the top Divas, let’s throw every Bella, Eve, Tiffany and Alicia on the show. Sure they all get a payday, but the product that the fans are delivered is compromised. The fans that pay for WrestleMania would rather see a decent-lengthed match between two Divas over a title.

And as if WWE hadn’t waved the big middle finger at us already, then comes insult to injury. The final blow that sends Diva fans into despair. That results in fans like you, reading this blog right now, expressing outrage and effing-and-blinding in our comments because you’re so angry. You spend week in, week out following the Divas on television. Following them online. Visiting WWE.com for the latest photoshoots. Attending autograph signings. And the worst money-grabber of all… paying for pay per views like this, to see them. That final blow came in the form of ‘Santina’ Marella. Not only had Santino hijacked the build to what was supposed to be a Divas match at WrestleMania, but now he was in the match too? And not only was he in the match, but he wins too. For the Superstars, WrestleMania is the culmination of a year’s worth of feuds. WrestleMania is where you get to battle it out in front of the biggest audience of WWE fans, but for the Divas, it’s a joke. The one and only Divas match at WrestleMania revolves around a man, how ironic for the sport we’re in.

Last night was possibly the single worst moment for the Divas since we ushered in the new guard in 2007. WWE’s complete unwillingness to put over this group of Divas at WrestleMania is tragic because you have such talented women on the roster. WWE has no confidence in this group of Divas, hence why all of them have managed to get a spot on the ‘Mania card every year since 2007. And that is not by mistake. Trish’s retirement led the demise of the old guard and along with it, went the confidence to put over just one or two Divas at WrestleMania. And this year, is the worst case yet… because a man is considered a Diva, and he/she is considered more of a priority than the real, talented women in the division.

But whatever. As far as I’m concerned, I will not dwell over that match anymore. What’s done is done and I don’t want to waste anymore energy on it, after myself and the rest of the Diva Dirt team put months of our time and effort into promoting that event. I have heard what you have all had to say, but I think it’s time to draw a line underneath it.