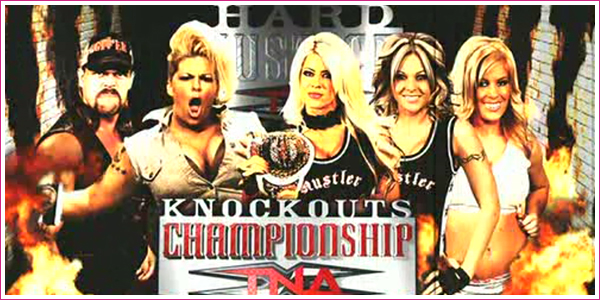 TNA delivers some Hard Justice tonight on pay per view, as Angelina Love defends the Knockouts Championship against ODB. Though it seems the exact details of the match are ambiguous; TNA has teased that Angelina will team with Velvet Sky and ODB with Cody Deaner while the latest lineup on TNAwrestling.com suggests a singles bout. It goes to show how much effort TNA has put in.

But in any case, here are our picks:

Erin: I just don’t see them handing the title over to ODB at this point, when really all she is is a punchline. Sure, she may kick the Beautiful People’s asses and show dominance, but at the end of the day, she and Deaner are just something to laugh at. Now, I can see them making a whole story out of them doing silly, trashy stuff with the Knockouts Title, but I don’t see much longevity in that. Though, TNA does like taking the title off of Angelina Love for a few weeks for strange reasons, so who knows what they’ve got up their sleeve. Still, I get the feeling that Angelina will retain her title, but only after some hi-larious shenanigans during the match involving Deaner. Maybe even use it re-plant the seeds for the Beautiful People tension that was teased a while back then uncerimoniously dropped? Maybe, maybe…

Melanie: This match is incredibly underwhelming considering the other things going on in the division right now, it’s not a pay per view caliber match to me and the only reason it’s on the card is because it’s a title match. ODB has become a Jillian for the Knockouts division — a comedy act that has lost it’s credibility. She is a great talent but that is lost considering the shtick she’s been doing with Deaner & the way they have booked this feud on everything but wrestling. ODB has lost any credibility as a serious title contender that she may have once had, I think it would harm the division to put the title on her, quite honestly. Considering that Angelina has only just won the title back, I don’t think it would be wise for her to drop it just yet & hopefully someone in TNA realises that. To be honest, I wouldn’t be completely shocked to see ODB and Deaner get the title to make it a prop in their comedy sketches, especially with ‘unfiltered Vince Russo’ as some wrestling journos are putting it. I don’t have a prediction, I think it could go either way. But for the sake of the division let’s hope Angelina retains.

Steven: I have seen this feud as a comedy since it started. It’s served no purpose in showcasing these girl’s talent, but has acted as a vehicle to get Cody Deaner over with the TNA audience. That said, I see Angelina keeping her title this Sunday, and feuding with Tara or Awesome Kong (again) after their feud concludes. However, I would love to see OBD take the belt, as she has deserved it for a long time. I fear, due to the nature of this match, ODB would have to be co-champion with The Deaner. A sad day in Knockouts history, indeed.

Tiffany: I predict that Angelina will prevail at Hard Justice. There hasn’t been much build-up toward ODB winning the title, and I’ve felt like her brief feud with Angelina was a way to keep the champion busy during Victoria‘s feud with Kong. Until that boils over, I think that ODB will be in cahoots with the Beautiful People just a little longer. I’m not convinced she’ll be winning the championship just yet.