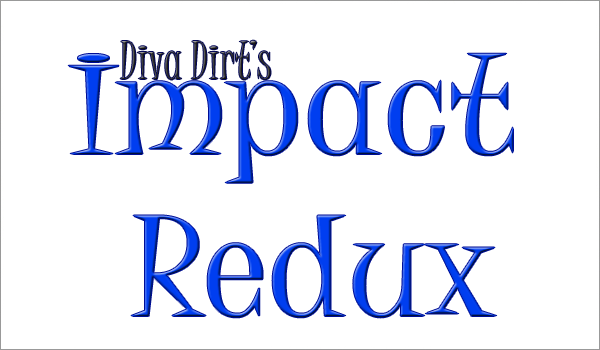 Today Kicks off Diva Dirt’s first “Impact Redux”, brought to you by yours truly, Doug. Most of the TNA Knockouts were shown throughout the show, including: Angelina Love, Velvet Sky, Roxxi, Moose, Taylor, Raisha Saeed, Awesome Kong, Karen Angle and Salinas, who all made for an interesting event.

Thoughts & Reactions
Roxxi vs. Moose:
The first set of Knockouts shown, I believe were Roxxi and Moose in a “Bimbo Brawl”. Moose entered first with her shopping cart of weapons, while Roxxi entered second with a chair. The match was utterly brutal, with Roxxi getting hit upside the head with two pans, and a “Yield” sign. Moose also took a beating, getting thrown into her shopping cart, and than getting a nasty baseball slide by Roxxi. The match ended when Moose set up the “Yield” sign on the mat, and planted Roxxi with a double underhook DDT on top of it. Roxxi was shown with a large cut on her forehead, and was bleeding pretty badly.

Overall, the match was pretty well done. Both ladies had great chemistry with one another, making the overall atmosphere pretty bitter. Roxxi and Moose each got their fair share of blows, and each showed an incredible amount of skill throughout.

Angelina Love and Velvet Sky continue to serve Angle:
Kurt Angle was shown numerous times throughout the show on so-called “dates” that Bubba Ray set up for him. He was dissatisfied with each woman, since each woman has some sort of “flaw” (overweight, transvestite, colon issues). As Kurt was complaining with Bubba over the women, Bubba brings out a more appealing woman that Kurt may like. When she tells Kurt that she is loyal, he starts going on a rant, and says that he would never hurt a woman… but he knows a few that would. Cue, “The Beautiful People”, a.k.a, Kurt Angle’s servants. They attack the woman, and put a paper bag over her head. Karen Angle then comes to the rescue, and slaps Kurt in the face.

This was pretty boring altogether. Though the “dates” were somewhat funny, they were more based on pure immaturity than anything. Angelina and Velvet didn’t do much, and they really had no place in the act. Let’s hope to see them in action very soon.

Overall not much happened with Salinas, unfortunately. She treid to pump up Hector by yelling and such, but that’s all. not much excitement.

Taylor vs. Raisha Saeed:
In this portion of the show, it was Taylor’s chance to fend off against Raisha Saeed. As stated on last week’s TNA, if Taylor defeated Saeed, she would get a match against Awesome Kong. If she were to beat Kong, she would win $25,000 and be the new Knockouts Champion. The match started off with Taylor and Saeed exchanging blows. Taylor hit a tilt-a-whirl armdrag on Saeed and dominated for the first portion. Raisha hit an interesting sort of slam, and attempted to hit a moonsault *Say What?!*. Taylor yet again got the upper hand, and tried for a cover, but Awesome Kong pulled the referee out of the ring. Taylor then hit a baseball slide on Kong, and followed by a German Suplex bridge pin on Saeed for the victory.

This match was very well done. Some nice back and forth between both ladies made for a good match. It’s very interesting how fast TNA gave Taylor “star-power”. And as we know, the victory over Saeed gets Taylor a match against Kong next week for the $25,000 and the Championship!

Knockout Of The Week:
The “Knockout of the Week” has to go to miss Roxxi, for enduring such a grueling match. I’ve never seen a woman take so many hits from a metal object in a wrestling ring (well, not since Trish Stratus in the “Chicago Street Fight”). She really made for some great entertainment, and had the crowd’s support 100%.

Video
Watch the matches below: