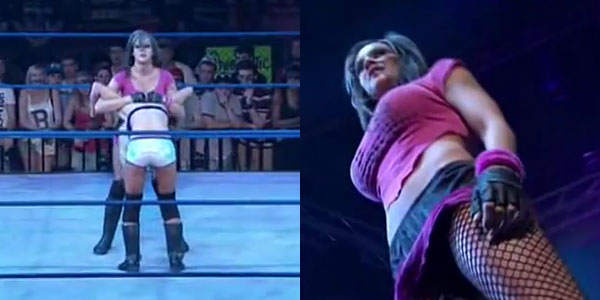 Greetings everyone, and welcome to another one of those rare TNA Xplosion Watches. The last time we met, Angelina Love and Velvet Sky had just faced off against one another in a match that saw Velvet Sky take the upset win despite repeated interference by Winter. This week, the two buxom blondes are at it again, only this time Winter has kept herself far away, allowing this rematch to be untainted by her underhanded tactics. Can Velvet solidify why she should be next in line for a title shot? Let’s find out!

Out to the ring we go and here comes the devious Angelina Love as I hear what I think is Eric Bischoff on commentary…blah. Love slides into the ring and poses on the turnbuckle as the Pigeons get their wings flapping. Out comes Velvet Sky slapping hands with the fans, before climbing up onto the ring apron and YES, LETTING THE PIGEONS LOOSE. Sky poses a little as well as the bell sounds and we get started. They lock up and Love scores with a knee. She continues with a few boots before Irish Whipping Velvet into the corner. Angelina misses a splash and faces a few roll up attempts for near falls.

Sky with a clothesline for a two count, as Angelina slides out of the ring to catch her breath and Velvet motions for her to come back inside. Love toys with Velvet a bit, with Velvet scoring a running dropkick and commentary discussing Garrett Bischoff of all people during the match. Velvet slams Angelina into the canvas a couple times, but is ultimately sent into the ringpost by Love…as we head to a commercial break. Once back, we see Angelina choking Velvet in the ring. She sends Sky into the ring and chokes her with a boot while I continue to be weirded out by Eric Bischoff and Jeremy Borash’s odd commentary.

Velvet hits a clothesline for a near fall, as Angelina then takes control with a sidewalk slam to score a close call. Angelina then attempts a suplex, but Velvet rolls her up in a Small Package for a near fall. Love with a huge clothesline and then relentless beating while the crowd tries to get behind Velvet. Angelina then scores with a few knees and a pretty sick jawbreaker, but only gets a two count again. Velvet is sent off the ropes, ducking a couple of clothesline attempts as both women collide with a facebuster. Both women are down until they get to knees and exchange blows with each other.

Velvet with some chops to the chest and following it up with a clothesline. She continues with an elbow, finishing with a bulldog! Sky goes for the twisting neckbreaker for a two count, which sparks Angelina to signal the “Break-A-Bitch”. Sky seems to be in trouble, but she quickly counters out and hits the Sky High for the win! She celebrates her victory, as Angelina plots what she will do for revenge shall the two former tag team partners ever meet again.

Thoughts: Entertaining match from Velvet and Angelina. It’s kind of like what I said in my Superstars Redux in that it’s kind of hard for me to get into matches on the secondary shows like this because they just happen to happen, but what separates it is that Velvet and Angelina have such a storied past with one another. I do think Angelina should have won tonight though because it would’ve helped set up for the rubber match since Velvet took the first, but hopefully this is leading to Velvet finally reclaiming the title she should have never lost!