Torrie Has Last Word on TNA 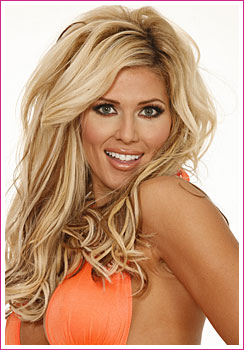 Since Torrie Wilson left the WWE last year, there have been numerous rumours circulating about TNA, specifically, Jeff Jarrett wanting to sign her as their newest Knockout. I’m not sure if TNA got the memo or not, but Torrie’s not exactly in wrestling shape after her string of back problems. But it’s not unlike TNA to splash cash at women who can’t wrestle (Jenna Morasca).

The latest wave of gossip came only a week ago from LordsofPain.net, click here. In an interview with The Baltimore Sun, Torrie sets the record straight:

I know some of your old WCW friends are working in TNA. Would you have any interest in doing anything with them?

No. Nothing against TNA, but WWE is where you would want to be in that industry. And, you know, I get anxiety going to visit my mom on a plane now because I was just traveling so much before [laughs]. So the thought of being gone even one day a week doesnâ€™t sound like something I want to do.

And there you have it. Even though she’s no longer with the company, Torrie is still WWE through-and-through! Torrie also made a pretty awesome comment about doing autograph signings, independent shows etc.

So youâ€™re not even taking any wrestling bookings at all these days â€“ appearances at indy shows or autograph signings?

Iâ€™ve gotten a lot of phone calls and Iâ€™ve done a couple of autograph signings, but Iâ€™m really just taking a step back. Like I said, Iâ€™m just not really into that travel right now. And after watching the movie The Wrestler, I donâ€™t think Iâ€™ll be doing any indy appearances any time soon [laughs].

I’ve talked in the past that I think it’s kind of degrading to have a great career on television and then go onto do an abundance of those types of appearances. It kind of tarnishes one’s legacy, I mean look at Sunny for example. Nothing against her, but she’s become notorious on that circuit and has had her fair share of drama such as being drunk at shows. I think it’s respectful to bow out gracefully and leave the business behind except for big events like WrestleMania, which I’m glad Torrie and her peers from that generation (Trish, Lita, Molly, Victoria etc.) are doing.