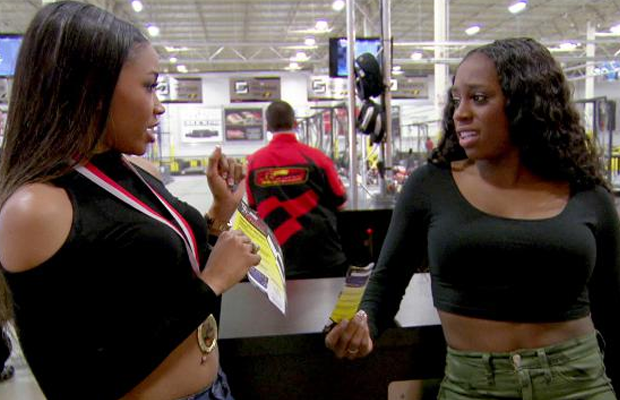 For the second week in a row, Total Divas and Tyson Kidd (TJ) has left me scratching my head. Surely this man can’t be that clueless, can he? And what in the world is up with rip-off Randy Couture who took Natalya (Nattie) out on her birthday?! Excuse me, his name is Jaret, and he has known Nattie for more than 15 years. I know,

I’m getting ahead of myself but this episode just really worked my nerves. I have loved every single Total Divas episode up until last night. Last night, all I wanted to do was throw the remote at the television. Dramatic reaction, right? It’s just a reality show, I get that. But seriously… who leaves their girlfriend alone in a hotel room during her birthday week?? Who tries to take their girlfriend out for a birthday dinner to their own sister’s home?! Seriously, no boyfriend does that and it makes it even worse that Tyson is Natalya’s future husband. HER FIANCE. He’s so lucky that he has that 13-year history with blond bombshell, because if he didn’t he probably would have been kicked to the curb. I’m just saying!!! We all watched the drama unfold as the WWE swung through Calgary on Sunday’s episode. That’s Natalya and Tyson’s hometown, and naturally the family that still stays in the area wanted to see the two.

What we never realized about the talented WWE superstar is that he is undoubtably a mama’s boy. Natalya said herself that Tyson’s mother is the most important woman in his life, and that it was a problem for her. Naturally, because Nattie believes that she is the most important woman in her man’s life and even called his mother, the mother-in-law from Hell. It’s a sad, sad day when Natalya doesn’t like someone, because she is literally nice to everyone. The sad thing is, these two didn’t even come to some type of resolution over their conflict. We had to suffer through watching Nattie and Jaret flirt with one another over spray tanning and later on, a birthday dinner. A birthday dinner that Jaret rented a private room in the restaraunt for. Oh boy. Next week is supposed to be Nattie’s bachelorette party and as we saw on the preview for next week, she can’t help but think of Jaret. Oh Tyson, look at what you’ve done.

While we are on the subject of relationship drama, the sister/sister relationship between the Funkadactyls, Naomi (Trinity) and Cameron (Ariane), was put to the test. The situation between the two got so back that it became physical after a rather dramatic go-kart outing during their off day. The two, along with JoJo and Eva Marie, decided to have some fun on a rare off day, but the competitive nature of Cameron kind of put a damper on the afternoon. She vowed to win the race, no matter what, and when Naomi came in fourth place, Cameron decided to shove her go-kart greatness in the face of her tag team partner. A nasty argument led to Eva and JoJo looking and feeling really awkward, and the Funkadactyls on the outs with one another.

The tension between the two spilled over to work, where Naomi kind of shocked me. Instead of doing the professional thing and leaving the drama at the door, she decided that she no longer wanted to work with Cameron. Talk about immaturity. It’s an unwritten rule that personal problems have to be left outside the door when it comes to work, but Naomi didn’t get the memo. Or maybe, she was trying to protect Cameron in a backwards way. Hey, she could have just not really wanted to go to jail for domestic violence. It happens. I feel that way with my own co-worker sometimes. There are days when I just want to punch him in the face and throw him in traffic because he frustrates me so much.

Mark and Jane (our favorite heel – wrestling term for ‘bad guy’, hehe), were in the midst of the Funkadactyls’ argument backstage when Jane offered to set them up with Stephanie McMahon for a meeting. As we know, Stephanie is the head of World Wrestling Entertainment’s creative team, and is in charge of whether or not changes can be made. The meeting with Stephanie was both good and bad. Naomi was called out for being unprofessional but stuck up for herself by saying it took two to argue. That was fair enough. They got their wish and got singles matches, and as we all watched, neither of them went very well. The Funkadactyls made up with one another almost immediately after their disastrous singles matches, and decided that for now they didn’t want to be apart.

I loved it. They are so, so good together. Wrestling fans know just how good Naomi is in the ring having seen her work for a few years now. She’s definitely an asset to Cameron and vice versa.

Relationships were definitely the theme of the episode, and the most tumultuous and personal one of all was the relationship the Brie and Nikki Bella have with their father, Jon. Nikki revealed that their parents’ divorced when the twins were 15, and it was their grandfather who really stepped up and into the father role for them. Their father had substance abuse problems and was never a stable presence in their lives after the divorce and out of the three (the Bellas have a brother named JJ), Nikki took it the hardest and most personal.

Brie and Nikki used their off days to go down to visit their grandmother, and Brie told her sister that she was planning on seeing their father as well. Nikki refused to go, and Brie didn’t really push knowing it’s obviously a sore spot with her sister. It was John Cena, Nikki’s leading man and the best boyfriend ever, who kind of nudged her into communicating with him and trying to work things out.

The scene with their grandmother and brother was nothing short of adorable. My grandmother was the most important person in my life, and I understand their need and want to spend as much time with her as possible. The gravesite scene brought tears to my eyes, and honestly, this just hit really close to home for me. Nikki ended up meeting her father and getting her feelings out, and how could you not get teary? I love the Bellas regardless of what people think of them and I love the fact they let something so personal play out on television. Life is so short, and I do believe that Nikki did the right thing in starting the process to patch up her relationship with her father. My tears were falling when she said she wished her grandfather could have met John, because he was the only good man she had ever dated. More tears during the entire meeting with their dad.

An emotional roller coaster of an episode, that’s for sure. Next Sunday we get Vegas drama and get to see JoJo get involved with an older man. That should be interesting to say the least!