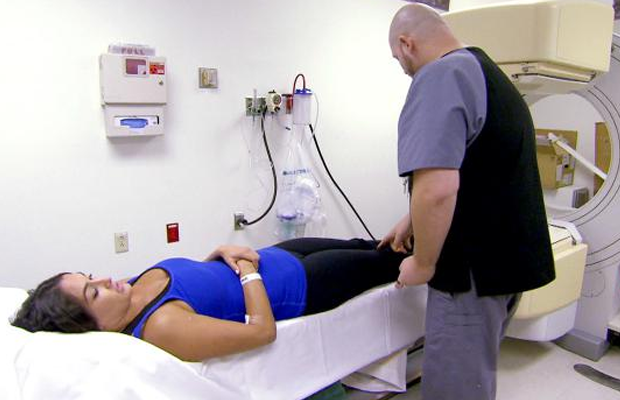 First of all let me say, I am super depressed that next week’s episode of Total Divas is the last one until November. It’s legit become the staple of my super Sunday night viewing and with everything else ending (looking at you Dexter and Breaking Bad), I’m afraid I’m going to have to resort to watching The Amazing Race on Sundays. Not that there’s anything wrong with that, but come on. I need my fill of catty drama and the cuteness of Glitty and Gismo. Glitty might be the cutest little pooch I have ever seen in my life, if I’m being honest. The previews to next week’s mid-season finale look amazing. Why in the hell was Cameron (Ariane) being carted out in an ambulance? Did knock off Randy Couture aka Jaret really show up at Natalya (Nattie) and Tyson Kidd‘s (TJ) wedding? And did Natalya really threaten to call off the wedding? I know, I’m getting ahead of myself and that’s fine, I’m just really excited and really, really super totally depressed that it’s all coming to an end.

One more interesting thing about the previews for next week was the teaser of the cattiness between Eva Marie and JoJo. As we watched this week, the two had some SERIOUS tension between them especially when our favorite sassy red head got asked to pose for Maxim, which is an extremely popular men’s magazine. Eva got the call as she was driving in Tampa and needless to say, she was ecstatic about the opportunity. The issue was going to come out in August, which would be around the time of WWE’s premiere summer event, SummerSlam. Now, if Eva Marie was expecting to be met with hugs and congratulations, she was sorely mistaken. The girls were definitely happy for her, but at the same time they had the usual worries. Would Eva Marie become the new face of the company? What was shocking to me, is at how pressed JoJo got over the fact Eva Marie got a chance to pose for a magazine. I mean seriously, was she expecting to get asked to pose as well? Did she want a matching photoshoot? Her “bitch face” when Eva Marie was showing her the proofs of the shoot was priceless and to be honest, made her come off as a sulky, sullen child who didn’t get the same toy for Christmas as her older sister.

It was so unflattering to see JoJo in that light, and it made me not really care about anything she tried to do to help herself. I realize that wrestling is a cutthroat business, and you have to do whatever you can to stand out and get ahead, but still! Later on, JoJo got a chance to put herself in the spotlight but it was kind of an epic fail. Naomi (Trinity) came up with the idea to get JoJo to redo the Tons of Funk theme song with her, and they could present that to the company. Naomi’s father, Shawn, is in the music business and was able to hook them up with studio time and everything sounded amazing while they were recording. Good ole Jane called JoJo once she had a chance to listen to the new version of the song and eventually it led to them getting a chance to perform it in front of a live crowd. Needless to say, it was completely awful and if you do believe karma, then you might want to say that JoJo brought it all on herself with her nasty little attitude. At least it gave Eva Marie a nice laugh, and even as I’m writing this, I’m still not sure if that is a good or bad thing.

Watching Cameron’s relationship fall apart on my television last night was a bad thing, even if Glitty made a couple of cameos. Vincent really put the pressure on his lady love, and after their time in Vegas, you just had a feeling that it wasn’t going to end well. During lunch with the girls, Cameron vented about her relationship woes and how Vinnie was pressuring her to meet his father. She wasn’t sure if she was ready to take that step but eventually she decided to go for it because it was super important to him. Vincent’s father, Andy, was absolutely lovely and enjoyed the fact Cameron even spoke to him in his native language, Armenian. But he just had to touch on two subjects that Queen Cameron just didn’t want to deal with – marriage and kids. It didn’t seem to go over well when Cameron said that children weren’t even on her radar for another seven years, and Andy, bless him, didn’t like that Cameron left his son every four days. It was definitely a bit of a mess.

Things got even worse when Vincent decided to surprise Cameron with a trip to the ring store. Not only was she overwhelmed, but she had a break down and ran out of the store in tears. Granted, I would probably start shaking and crying if a million dollars worth of diamond rings were paraded in front of my face, but I promise you it would have been for an entirely different reason than Cameron. Vincent followed her and that was when all her emotions started pouring out. She basically told him that they had to take a break, and that she was so sorry because she really does care about him. For Vincent, all of this came out of left field but he handled it like a champ. He put the neanderthal aside and promised to wait for Cameron, and they tearfully embraced at the end. It was actually kind of sad, to be honest, and I didn’t think I would be that upset to see the end (…for NOW) of “Camnie”. At the end of the day, Vinnie is just an overbearing, loveable bear of a man who’s fallen hard for a sassy, feisty WWE Diva and that is actually kind of awesome. They better work it out, damnit! LOVE CAN CONQUER ALL!!!

By the way, Glitty was a designer tote bag, securely on Cameron’s shoulder the entire time!

Another downer was the injury of Nikki Bella. It occurred during a match that I actually remember watching (unlike JoJo performing the Funkadactyls theme song which I never watched, and now I know why. Always, ALWAYS trust those Khaleesi instincts) and the fall was super nasty. What I did not know, is that it was a flare up an 11-year old injury Nikki had been carrying with her. Obviously, Nikki didn’t want to do anything about her injury and her sister, Brie, wasn’t impressed with that decision. She threatened to go to John Cena, Nikki’s beau, and to the company, and finally Nikki broke down. She went and had a bone scan, and the scan came up with an injury. The prognosis for Nikki was a stress fracture that needed about 12-weeks to heal. For a Diva, that could end up being a career killer, and Nikki said as much when the company decided to take her off the road. Brie was supportive and John was as well. At least Nikki has the comfort of knowing that she has a solid support system to get her through this.

Great, great episode. This show gives me life. I can’t wait for next week even if it means I’m going to have to be miserable until November.