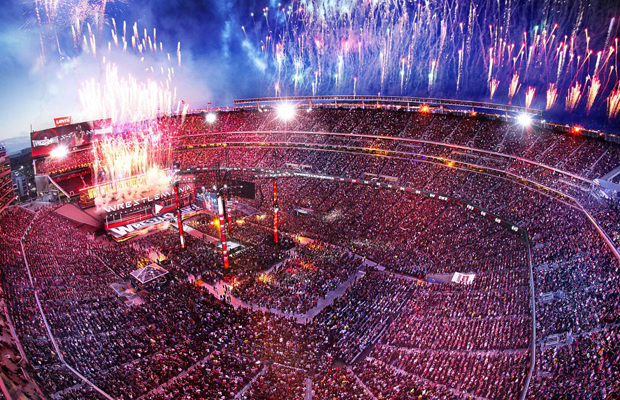 WrestleMania has always been a bit frustrating for Diva fans. While men’s matches are usually given months of build up, the ladies have always been kind of an afterthought. Sometimes we find out about the Divas match at ‘Mania as late as the weekend of via the WrestleMania program being sold or even find out it’s cancelled during the event. The Divas are usually given unfair treatment. That is, until this year.

It almost seems kind of surreal that this year’s WrestleMania will feature two Divas matches and both of them have some pretty decent build up heading into them. In fact, one of them is being featured as a main attraction with promotion on the side of Cowboys Stadium in Dallas. When I first saw that picture of Sasha Banks, Charlotte and Becky Lynch plastered on the side of the building it felt a bit surreal. Has women’s wrestling come this far that it’s being this hyped? So much has changed in the past few years.

I can remember back to 2009 and being so excited about seeing my favorite Divas of the past compete in the Battle Royal. I think every Diva was so disappointed when they weren’t even given introductions, but forced to grind up against Kid Rock and his greasy hair. I spent most of the five minute match trying to even figure out who was competing in the ring.

In 2010, there was no word of a Divas match even happening until a fan uploaded a picture of the WrestleMania program revealing a ten Diva tag match where each lady was given about 30 seconds of ring time. It was huge disappointment considering the WWE had laid our all the groundwork for a Triple Threat match involving Michelle McCool, Beth Phoenix and Mickie James for the Women’s Championship. It would have been a perfect match to tie together months of feuding on SmackDown.

In 2011, we were given some build for the match with Trish Stratus returning to feud with LayCool. Sadly, much of the hype for the match was because Snooki was involved. The match itself wasn’t very long and its most memorable moment was John Morrison snubbing Trish.

2012 saw another celebrity being thrown into the Divas match with Maria Menounos teaming with Kelly Kelly against Eve Torres and Beth Phoenix who were randomly paired together. Fans that year had been clamoring for Beth to face Kharma at WrestleMania in a dream match. For some reason, WWE never pulled the trigger and we were forced to watch Maria get Eve’s foundation all over her white pants, which caused fans to speculate that she had crapped herself.

The most disappointing ‘Mania moment of all time was the cancellation of the Mixed Tag Team match at 29. My heart sank as John Cena’s music hit and the realization sunk in that there would be no Divas action on the show. It was even more heartbreaking when we realized it was a storyline for Total Divas and as much as WWE wants to deny that, they literally showed it was staged. While Natalya was saying “This is John Cena’s music…they cancelled their match” you can see green lighting and Triple H’s titantron playing through the window behind her, a match that took place before the scheduled Divas match. Also disappointing that year was a lack of Divas Championship match. AJ Lee and Kaitlyn were pretty much destined to face off, and ‘Mania would have been a great time for a match or at least a brawl at ringside during the Tag Team Championship match.

WrestleMania 30 was kind of an apology of sorts, as the WWE literally threw every Divas into a match to make up for only including one the previous year…but it was in the death slot. I personally enjoyed the match and it kind of did make sense to include many women, as AJ pissed off nearly everyone that year. It just felt like a disappointment as the ignorant audience booed the women, who were placed on after the most shocking moment in ‘Mania history.

Last year was given some build up and actually was promising. It tied together perfectly as AJ Lee and Paige had spent months feuding with each other and aligned to take on a common rival in the Bella Twins. Personally, a Fatal Four-Way match for the title would have been much more exciting and brought a more unique dynamic to the match, but it was a nice feel-good moment to see “The Freaks and Geeks” get a win over the Bellas.

This year, though, is real build up. The Divas Title match has essentially been built up for over a year leading back to the girls’ developmental days in NXT. They were the three women brought in to begin the Divas Revolution and it’s only fitting they all face off for the title. The matches leading up to this have been spectacular and Becky and Sasha teaming up last month was a nice twist to the story. I personally believe this match will steal the show at WrestleMania. The women have something to prove. This is their chance to show that women can be the future of WWE and can be a serious draw. All eyes will be on them and I know they won’t disappoint.

What’s even more incredible is that this is the first time in ten years we have two Divas matches. Team Total Divas will face off against B.A.D. & Blonde on the pre-show. I am thrilled this match is taking place there. It’s a shame they won’t be on the main stage but the pre-show will definitely allow the match to be given more time and development to tell a real story. This has potential to be a fun match with all of the backstories which have surprisingly been acknowledged in the build up (if you missed those segments check out Main Event & WWE’s social media accounts). Lana is making her in-ring debut here as well and from what we’ve seen so far she may actually be decent in the ring. Emma and Eva Marie are back on the main roster for this match as well. I’m not really sure they were 100% needed, but it certainly doesn’t hurt. I could really see Eva trying to turn on her team and keep playing her heel character leading to Eva vs. Brie Bella in Brie’s final match the next night on Raw. There will definitely be fans who are “annoyed” this match is taking place and will complain about it, acting like some wrestling historian. Those people really need to get off their high horse. Will it be a mat classic? Maybe not, but it’s an opportunity for a large part of WWE’s Divas division to shine. If you’re not interested, complain on some wrestling forum or go the pork buns stand (where you can find me for most of the men’s matches at ‘Mania).

Happy or not with the match choices, the beautiful thing here is that all of the women are represented with real build up in storylines with segments, matches and hype. The women have worked their asses off for this and all deserve it. We deserve this. Diva fans have sat through cancellations, multi-women mess matches and worse. In a year’s time the division has turned around and is being taken seriously. It’s like the hope we have had our entire lives as wrestling fans is finally being rewarded. Much like fans voiced their opinion to push Daniel Bryan years ago, our voices were heard. Our voices saying that women can steal the show. Our voices saying the women are marketable. Our voices saying that the Divas deserve top billing at WrestleMania. This Sunday is the moment when as Diva fans we realize everything we’ve gone through was worth it. This Sunday is at last the Divas’ WrestleMania moment. Our WrestleMania moment.