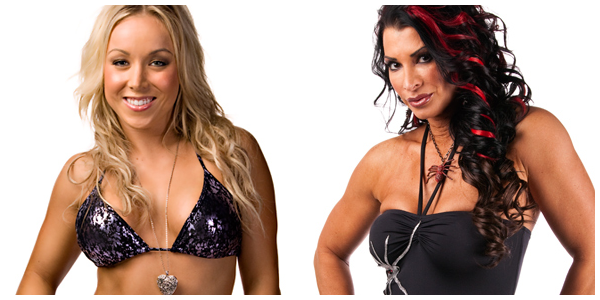 The Wrestling Observer newsletter says: “Her contract expires at the end of next month and she is looking for a raise as well as more time off from the road in order to focus on her custom car shop in Louisville, Black Widow Customs. The odds of her re-signing with TNA are said to be slim at this point.”

Tara — real name Lisa Marie Varon — didn’t deny nor confirm on her Twitter page that she will be leaving, only confirming that her contract is set to expire on May 21st.

Meanwhile, Taylor Wilde (real name Shantelle Malawski), the first Knockout to hold both the Knockouts Championship and Knockouts Tag Team Championship, could be dropped by the company says the Observer. Wilde’s contract is said to be expiring and there is no talking within TNA of renewing it. Diva Dirt has also heard a similar story, though the Knockout in question wasn’t known to us until now.

Both of these Knockouts leaving would be a huge blow to TNA which is already in a state of flux with it’s Knockouts division. They are giving us crap like a Lock Box Showdown on TV and girls are leaving, being released or getting injured. It makes you wonder whether the Knockouts division could implode in the coming months.