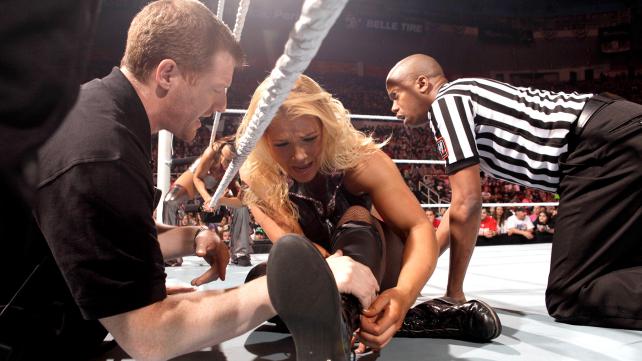 Former Divas Champion Beth Phoenix‘s injury last night on Raw appears to have just been part of the storyline, according to PWInsider.

Phoenix appeared to hurt her ankle on the show last night during a title defense against Nikki Bella. PWInsider reports that the injury was just a storyline device used to explain the title switch.

The website reports that Phoenix, who did a great job selling the injury, even convinced some wrestlers backstage that she was injured.

The report adds: “I was told that Phoenix actually sold the injury after leaving the building last night and in the Detroit airport this morning while she was in front of fans.”

Thoughts: Watching the segment, it did appear to me that Beth’s injury was a work, however, I have been hesitant to comment in case it did turn out to be a legitimate injury (in which case, well wishes to her). The focus on the injury and Beth’s selling of it felt a little too coincidental. Usually when wrestlers are legitimately injured, they tend to try and push through or roll out of the ring (such as Eve’s bloody nose earlier this year) and little focus is put on them, while Beth was seen visibly crying and shouting. I’m sure we can all agree, if worked, Beth did a phenomenal job putting over the injury.