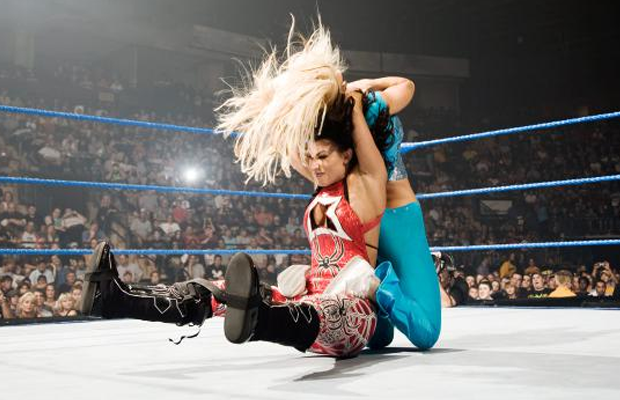 WWE.com has compiled a list of the 50 “Coolest Maneuvers of All Time”, and the only Diva move among the ranks is Tara‘s Widow’s Peak.

Tara, known in the WWE as Victoria, first performed the move in 2002 and has consistently used it as her finisher ever since.

WWE.com discusses what made the move special, saying:

Putting her own spin on the Gory Neckbreaker — a move innovated by Mexican ring legend Gory Guerrero — Victoria felled many a female in WWE with the chiropractic nightmare she called the Widow’s Peak. In executing the maneuver, the raven-haired aggressor would hoist her opponents back-to-back over her shoulder then drop them savagely to the canvas, twisting their necks backward in a sickening show of force. Incapacitating such iconic Divas as Torrie Wilson, Stacy Keibler and WWE Hall of Famer Trish Stratus, the Widow’s Peak earned Victoria her second Women’s Championship in a Fatal 4-Way Match on the Feb. 23, 2004, edition of Raw, when she used the dreaded maneuver to take out Lita.

What is women’s wrestling’s coolest move?