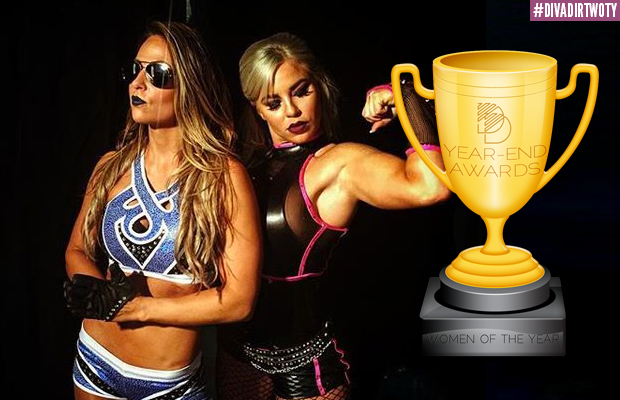 You know what they say: opposites attract.

When new NXT Diva Dana Brooke joined forces with the returning Emma, the event was met with a lot of confusion. At first blush, the pairing felt random and forced. It wasn’t long, though, before they started to gel.

Apart from their unique chemistry, their success owed a lot to their similar goals. Dana, fresh on the scene, was looking to make her mark and carve out a place for herself in the highly competitive division. Emma, meanwhile, was returning from the main roster, where her career had stagnated. For her, the NXT Divas division was a place to reinvent herself and seize a new lease on life.

Together, they found personalities that worked for them: Dana was the mouthy muscle, getting the duo into trouble as often as she was sneaking out wins. Emma became a more vicious version of herself, still a bit quirky but with a mean streak that brought her more acclaim than her bubble-popping, happy-go-lucky self ever did on the main roster.

Dana and Emma’s first official outing at TakeOver: Unstoppable wasn’t a successful one on paper, but it did do a lot to firm up their partnership. As it turned out, losing to Bayley and Charlotte wasn’t exactly a friendship killer. Similarly, their loss to the one-night-only reunion of Charlotte and Sasha Banks enhanced their identities as heels, with Charlotte appearing as a last minute teammate for the outnumbered Sasha. Emma and Dana were bullying The Boss, of all people! If they could do that, who wouldn’t they gang up on?

The pairing, despite being made up of two dishonorable heels, has been surprisingly steadfast. Their only hiccup came in a Fatal Four-Way match taped before TakeOver: Brooklyn, where Emma and Dana gladly played the “every woman for herself” card in the hopes of getting a huge, brag-worthy win over new main roster Divas Charlotte and Becky Lynch. Emma ended up picking up the win, and Dana had no hard feelings about the tactics she used to get it. The team soldiered on.

With the arrival of Asuka, Emma and Dana would finally bite off more than they could chew, challenging the Japanese Diva on her very first NXT appearance. The mind games commenced, and are still ongoing, with Asuka picking up decisive singles wins over Dana and Emma and scaring the wits out of them all the while with her unpredictability, unparalleled skill and menacing smile. Here was their perfect foil: someone who allowed them show off their quirks while testing their in-ring skills in spectacular matches.

On paper, Dana and Emma’s 2015 doesn’t look all that successful; losses litter their resumes. Such is the fate of heels, though: they often get too big for their britches, poke the bear and pay for their sins. That results in a lot of losses and humbling experiences. The good news for Dana and Emma, though, is that they’ve created solid roles for themselves in the division by finding a way to make the usual Diva heel duo into something new. They’re not just bullies, “mean girls” or cheaters. They’re a sitcom duo in a wrestling ring, getting into scrapes and somehow finding ways to survive and do it all again tomorrow. What’s old is new again!

In that way, Dana and Emma’s year has been a complete, unadulterated success.