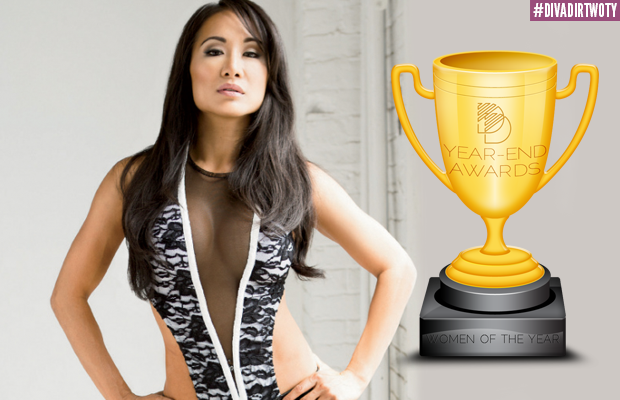 With another year comes another wave of accomplishments for Gail Kim.

In 2015, four-time Knockouts Champion Gail became a five-time Knockouts Champion, putting her one reign away from tying Angelina Love‘s record for most title runs. Though she wouldn’t meet that accomplishment until September, Gail saw plenty of action throughout the year, kicking things off in January with two hard-fought losses in Knockouts Title matches.

When she fell twice in matches for the number one contendership – once to Awesome Kong and another to Brooke – Gail didn’t give up, opting to align herself with Awesome Kong to take out the champion Taryn Terrell and her biggest assets: her Dollhouse teammates Jade and Marti Bell. They weren’t successful, though, and Taryn only grew bolder, targeting Gail’s husband Robert Irvine as well as her stepdaughters, easily getting under Gail’s skin.

When Gail finally got her title shot – in Six Sides of Steel, no less – she was seriously outnumbered. She lost the match as well as the full use of her left hand, as Taryn celebrated her win by breaking Gail’s wedding finger. This put Gail on the shelf for two months, but when she returned, it was with a mission of vengeance.

Eerie vignettes foretold Gail’s return, and even so, she was able to catch Taryn by surprise, appearing suddenly during her Knockouts Title defense against Brooke. Gail took out Jade and Marti, opening the door for Brooke to win the title. Finally, Taryn had been vanquished, and she wouldn’t actively compete in the ring for the rest of the year.

In September, a Global Force Wrestling invasion mixed things up and brought about a Fatal Four-Way match for the Knockouts Title, which put champion Brooke against Gail, Awesome Kong and GFW’s Lei’D Tapa. Gail would win the match, becoming Knockouts Champion for the fifth time.

Gail would go on to feud with her old rival Awesome Kong, successfully defending the title against her in a brutal match at Bound For Glory. Though it wasn’t as ruthless as their earlier matches, the match still pushed Gail to her limit. At one point, she took an Implant Buster onto two steel chairs, right in front of her distraught husband. She regrouped, though, as only Gail Kim can, hitting an Eat Defeat off of the top rope and then rolling up Kong for the pin.

She wasn’t done impressing, though: Gail was one of four Knockouts selected to compete in TNA’s World Title Series, advancing to the round of 16, where she fell to Tigre Uno. She put up one hell of a fight, though, at one point catching him in her signature Figure Four around the ring post.

Though Gail’s 2015 technically ended in defeat, there’s no way to see her year as anything but triumphant. Any woman 15 years into her career and four years into a second TNA run might be slowing down at this point, but not Gail. She continuously finds ways to reinvent herself and stay fresh, making it clear why she’s TNA’s golden girl: she’s just that damn good.