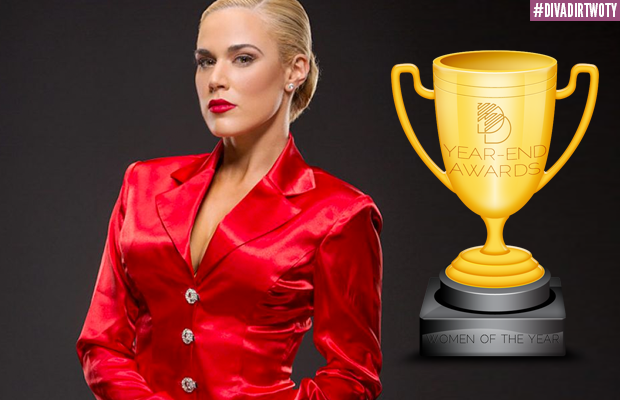 Attention! may be the name of the theme song but that is exactly what Lana commanded this year in her WWE career…and her personal life.

The Ravishing Russian began her year on top of the WWE. She played a crucial role as Rusev’s manager in a high profile feud with John Cena. Not only was this an opportunity to show what Lana could really do as a manager and a mouthpiece but it began rising her stock in WWE.

By WrestleMania 31, Lana was one of WWE’s hottest names with rumors of her being the next face of the Divas division. Wearing a stunning all white ensemble at ‘Mania, Lana got physical by taking a bump off the ring apron, which resulted in Cena winning the United States Championship from Rusev.

From there, Lana and Rusev continued their feud with Cena while arguing constantly with each other. Lana ended up “quitting” on Rusev’s behalf in an “I Quit” match at Payback, which was the last straw for Rusev. The duo split, but the WWE Universe was firmly behind Lana.

Not only did she find solace with the supportive fans, but Lana began to find comfort in Dolph Ziggler. The two began an on screen romance and Lana debuted a new look by letting her hair down and donning some denim skirts. Rusev brought Summer Rae into the picture and the two blond bombshells tore each other apart at ringside.

Shortly after SummerSlam, Lana was injured during training for her in ring debut. Sidelines for months, Lana began her recovery.

Although her last few months of 2015 were quiet in the WWE, Lana made waves outside of the company. Lana’s real life engagement to Rusev blew up TMZ headlines and switched up WWE’s storylines dramatically. In addition to her romantic endeavors, Lana made a cameo in Pitch Perfect 2 in May. She’s also been quite outspoken in some recent Twitter battles with the likes of Paige and Rosa Mendes.

Beginning 2016 back in Rusev’s corner, makes this Lana’s time to show exactly what she is capable of as a manager. Although she lost some of her steam being sidelines, she is poised to be back in the fans good graces in no time!