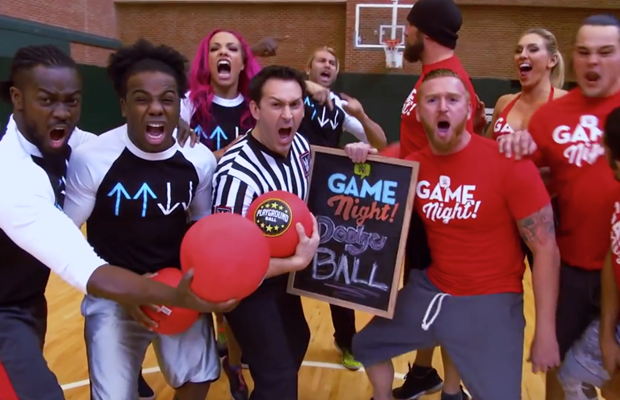 * Charlotte and Sasha Banks play dodgeball in the latest episode of WWE Game Night. The WWE has also published a video giving fans a 360 degree view of the game. (Video 1, Video 2)

* Aliyah reportedly had to be helped to the back after her match with Liv Morgan at last Friday’s NXT live event. (Wrestling Inc)

* TMZ Sports caught up with Stephanie McMahon and Triple H to ask them about their midnight workouts. (YouTube)

* Gail Kim is now the longest reigning Knockouts Champion of all time. (Instagram)

* WWE Network cameras filmed Becky Lynch as she put on a performance art show last Sunday. This footage will air on the second season of Swerved. (Twitter, Wrestling Inc)

* Mick Foley and his daughter Noelle are set to star in a new comedy series for the WWE Network. (Wrestling Inc)

* Xavier Woods’s UpUpDownDown channel has posted a behind the scenes video from the WWE Game Night dodgeball game. (YouTube)

* Chyna recently spoke to CBS Sports radio about why she thinks she could be inducted in the WWE Hall of Fame. (Wrestling Inc)

* Kaitlyn graces the cover of the next issue of Iron Man Magazine, which will hit newsstands at the end of the month. (Twitter)

* Brie Bella recently spoke to OK Magazine about retiring from wrestling and when she’ll start a family with Daniel Bryan. (OK Magazine)

* AJ Lee is featured in the WWE’s latest Five Things video, which highlights competitors that are undefeated at WrestleMania. (YouTube)

* Natalya recently took part in a Q&A for BuzzFeed. (BuzzFeed)

* Nikki Bella continues to train for her return to the ring in a new video posted by the WWE. (YouTube)

* Natalya talks to Brie and Nikki Bella about her family photoshoot and Rosa Mendes vents to her boyfriend about his trip to Vegas in this week’s Total Divas bonus clips. (Video 1, Video 2)