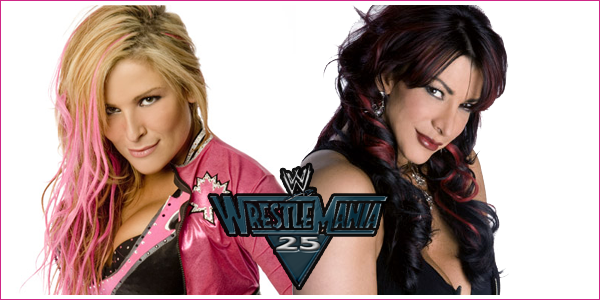 While WrestleMania’s 25 Diva battle royal might be a dream come true for some Diva fans, its a train wreck waiting to happen for most. What happened to the good ol’, one-on-one matchups. Well for the next few weeks leadingÂ up to WrestleMania,Â Diva Dirt will beÂ  bringing you theÂ  Wrestlemania dream matches that we wish would happen or might even happen in the future. Welcome toÂ WrestleMania Fantasy Face-Off!

Match 1: Natalya(c) vs Victoria for the Divas Championship

The Setup:
After losing the match to crown the first ever Divas Champion to Michelle McCool, Natalya and Victoria decide to assert themselves as Smackdown’s top Divas. For the next few months, Natalya and Victoria blaze through the Divas division, leaving devastation in their wake. After winning several single and tag matches against The Bellas, Maria andÂ even the champ Michelle McCool,Â The destructive duo are named co-#1 contenders by Smackdown GM, Vickie Guererro. After they lose both their respective matches, the two Divas beg Vickie for rematches. Vickie grants their wish and books them in a Triple Threat Match for the Divas Title. During the match, Natalya and Victoria work as a team until McCool lays Victoria out with a stiff kick and is subsequently taken out by Natalya. Natalya sees her opportunity and pins Victoria to win the belt. When approached backstage by an irate Victoria, Natalya responded: “I was just taking care of business. NothingÂ personal”.

The following week on Smackdown, Natalya defended her newly won title against McCool.Â TheÂ match ended in a DQ when Victoria attacked Michelle as she was about to pick up the win. Afterwards, The BFFs were celebrating Natalya’s title defense in the ring, when Victoria attacked Natalya and finished her off with the Widow’s Peak. The two brawling beauties feuded for the next month and a half, Victoria winning several non-title matches and tag matches with her new BFF Maryse, but losing her title match via The Sharpshooter. After pinning Natalya a non-title match, Victoria is granted a second Title Match at Wrestlemania. However, Natalya gets toÂ choose her own stipulation. The next week, Natalya announced that the Divas title will be defended in a Title vs. Career Match. If Victoria loses, she leaves the WWE.

The Outcome:
The experienced Divas put on a wrestling clinic, the likes of which ‘Mania hasn’t seen since Moolah vs Wendi Richter. While she fought valiantly, Victoria lost after a powerbomb from the top rope. After the match, the former BFFsÂ  put their differences, shook hands and embraced, Victoria dissolving into tears. She gave a farewell address to the fans who cheer: “Thank You, Victoria!”Â  Backstage, Victoria is shown walking to the locker room, where she is met by all the Divas. Hugs and tears ensue.

So what do you guys think? Leave your thought in the comments.