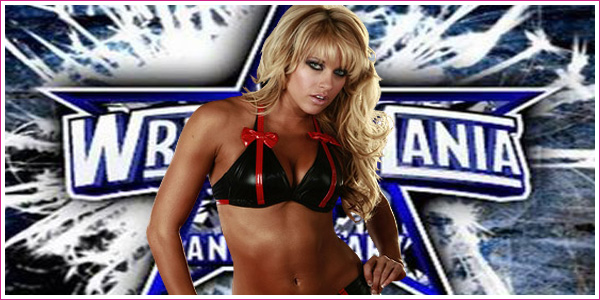 With the Divas Battle Royal at WrestleMania 25 quickly approaching, Diva Dirt has decided to take a closer look at each of the known and rumored participants in the matchup and assess their odds of winning as being High, Moderate, or Low. The winner, of course, will be crowned the first ever â€œMiss WrestleMania.â€ This is a new feature that will take place right up until the big day in Houston, TX on April 5th, 2009 and will be covered by yours truly, the â€œMouth of the South,â€ Hassan! I will save my prediction for the winner as the very last WrestleMania Spotlight profile I do. Be sure to leave your opinion in the comments! Letâ€™s get right into itâ€¦ here is Raw Diva Kelly Kelly!

Kelly Kelly has literally gone from zero to Diva. Pulled straight from a magazine with absolutely no wrestling training, Kelly has transformed herself from an exhibitionist to one of Raw’s prominent Divas.

Kelly came onto the scene when ECW was first made into a weekly show and had her own segment, called Kelly’s Expose. She soon became a valet to then-boyfriend Mike Knox, and eventually found her way to the ring. On ECW, Kelly got the chance to further practice skills she learned in OVW. She won her first singles match by defeating Ariel, but wasn’t so lucky on other occasions. She definitely was on WWE’s good side and they clearly saw potential in her, because other Divas in her position probably would’ve ended up released.

When Layla and Brooke came onto the scene, Extreme Expose took on full form. Kelly pretty much gave up wrestling and instead did weekly choreographed dance routines for several months. Her eventual crush on Balls Mahoney and disinterest in Extreme Expose’s contract owner, the Miz, led to her leaving the group. Brooke’s release from the WWE set up the ongoing feud between Layla and Kelly. Both had little experience in the ring, but with time, both Divas became more and more polished.

The 2008 Draft saw the departure of both Kelly and Layla to Raw, where Kelly has become one of the WWE’s top faces. She is still not as refined a wrestler as other Divas, but she has proved to everyone that she won’t give up and with each passing week, becomes a better athlete. She’s been called “the next Trish Stratus” in that with time, she will become a top wrestler and WWE’s main Diva.

Although I don’t particularly like calling her Trish 2.0, I think she is definitely going places. The Battle Royal could be the perfect opportunity for the WWE to continue pushing Kelly into the top spot and prepare her for an eventual title run in the future. What better way to become the new Golden Girl of the WWE than to beat and dethrone the former one, Trish Stratus? I could definitely see an upset happening and Kelly winning the match to establish herself as the next big thing.

Kelly Kelly’s Odds of Winning On The Hassan-O-Meter: Moderate