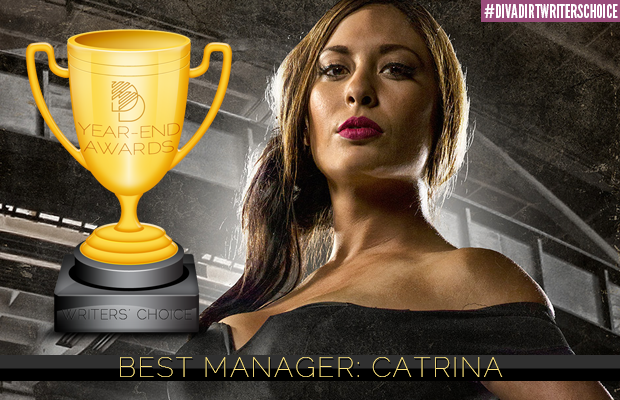 Forget Leilani Kai and Maria Kanellis on the indies and the Carmellas and Lanas of the WWE, one woman led her men to greater glory than anyone else in 2015. That woman is Lucha Underground’s “Mistress of Macabre”, Catrina.

The Dark Temptress steered both Mil Muertes to the Lucha Underground Championship and the Disciples of Death to Lucha Trios Title success, ensuring that she is someone not to be messed with. When she is around, her men are simply unstoppable.

Catrina has also proved that she isn’t afraid to mix it up physically either. She’s taken Flying Chuck kicks from Johnny Mundo, delivered Licks of Death to Ivelisse and she even sealed Mil’s fate by costing him the win in the first ever Grave Consequences match.

Following that betrayal, she managed Fenix for a short time, before sinking her teeth into him after it was revealed she was setting him up to fail against a reborn Mil Muertes. Catrina knew exactly what she needed to do successfully reawaken her man, and she pulled her plan off perfectly.

It isn’t just at ringside that Catrina has played a fundamental role. Whether it be in the temple’s dressing rooms or Dario Cueto’s office, Catrina behaves like she runs the place. Who knows – maybe her power could lead to her achieving just that? She has done practically everything else. One thing she hasn’t managed to do yet is transition to the ring itself, but with valet skills like hers, if her tactics aren’t broken, why fix them?

Catrina has proved she can manage and manipulate better than anyone. The Era of Death has begun and I imagine it will reign for a long time to come. 2015 was a phenomenal year for the sinister siren.