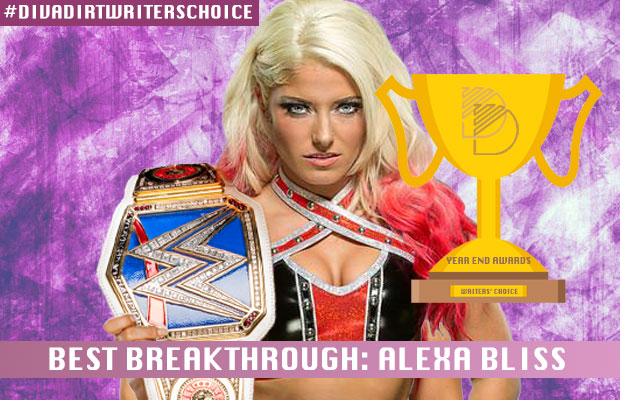 Who would’ve thought that Little Miss Bliss would end 2016 as champion?

At the start of the year the small but fierce Alexa Bliss was an overlooked member of NXT’s women’s division. From her companion ship with Blake & Murphy to her stellar matches with the likes of Carmella and Nia Jax, Bliss had a great start to the year on WWE’s developmental brand. However, things truly started to kick off on May 18th, when she ditched her boys and went solo. Soon after this shocking (and much needed) change of plans, Bliss’ world turned right-side up as she was called up to the SmackDown Live women’s division. Here she would transcend to the big leagues where she would defeat Becky Lynch in her debut match, win her pay-per-view debut at SummerSlam, as well as compete in the history making Six Pack Challenge at Backlash to crown the first ever SmackDown Women’s champion.

Though Bliss found herself the first to be eliminated from the Six Pack Challenge, she’d bested four other women to become the number one contender for the SmackDown Women’s championship, after pinning crowd favourite Nikki Bella. This would then lead to a phenomenal main event match against Becky Lynch, and though she wouldn’t be victorious, her witty ways and villainous tactics would get her to rue the day…

During the final SmackDown Live exclusive pay-per-view of the year, Alexa Bliss performed in a show-stealing Tables match that would lead the Wicked Witch of WWE to becoming the second ever SmackDown Women’s champion.
2016 was Alexa’s year. She proved that she was more than just a valet and a number one contender. Bliss proved that her time isn’t “coming”, her time is now. And as promised when she was drafted, she made sure that we would “not forget the name ‘Alexa Bliss'”.

Through her witty work on the mic, brilliant interactions with fans and consistent in-ring chemistry with her fellow SmackDown Live competitors, Bliss proved that she is one to watch, and 2016 was truly her breakthrough year.