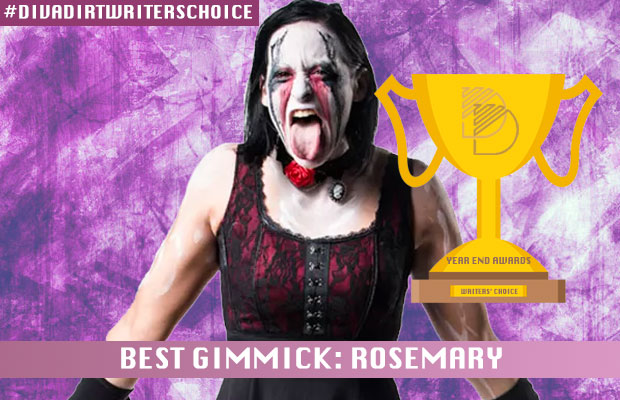 The year 2016 was the year that saw a wave of new names make their way to the TNA roster.

There were the likes of Moose, Marshe Rockett and Aron Rex. There were the real life wrestling couples Mike and Maria Kanellis-Bennett, Cody and Brandi Rhodes, Braxton Sutter and Allie. There even new names introduced to the Knockouts division with the additions of Raquel, Sienna and Laurel Van Ness. But, arguably, the biggest newcomer (and biggest breakthrough) to TNA was none other than Rosemary! And what was the driving force behind Rosemary’s success? Maintaining a riveting character all throughout a year’s time!

As with anything, first impressions matter and Rosemary certainly made her presence felt in her TNA debut at the start of 2016, greeting The Wolves with a dark message and leading a new stable which would go by the name of The Decay, consisting of Rosemary, a repackaged Crazzy Steve and rejuvenated Abyss. The trio would go on to wreck havoc for the first few months of the year, taking on different challenges between all former TNA Tag Team Champions The Wolves, The Bromans and even Beer Money.

Eventually, the group had their sight set on the TNA Tag Team Titles for themselves and would do whatever it took to obtain the gold – even if it meant abducting the ever-so prominent Gail Kim and using her as leverage for a title shot against Beer Money!

After laying claim to the TNA Tag Team Titles in a match dubbed a “Valley of Shadows” match, Rosemary continued to elevate the stable by challenging her colleagues’ fear of change. In an eerie style makeover and use of some inner fluid, Rosemary was able to give Crazzy Steve the voice he never had during his time with The Menagerie and Abyss the “beauty” he was missing to be free of the mask which he had carried for years; something James Mitchell and Dr. Stevie were never able accomplish.

Of course, no character is complete with some backstory; Rosemary is no exception. Our first glimpse of Rosemary’s mysterious past happened during TNA’s trip over at the UK, where she was confronted by Jimmy Havoc, who seemed to want reignite some fire from a dimmed relationship. Though Jimmy was never able to realign whatever stars he may have had with Rosemary, his brief appearance did shed some light on Rosemary’s stance on trust.

As we find out in the place of secrets, along with Bram, a young Rosemary had been betrayed by those closest to her growing up. There was her mother, who tried to cover the death of their beloved cat Fifi…

… as well as being betrayed by a young boy by the name of Johnny, who violated her trust and broke her heart on the most celebrated day of love, Valentine’s Day. These betrayals from loved ones only pushed Rosemary to thrive into darkness and decay those who would defy her including Bram!

Though she wasn’t an active part of the Knockouts division until the very end of 2016, Rosemary has never shied away from causing mayhem to others and she played a crucial role in The Decay’s feud with The Broken Hardys.

… or even putting Reby through a table, it was Rosemary’s aura that had fans wanting to see more.

Rosemary would conclude her 2016 with the Knockouts title in her grasp by defeating Jade in a six sides of steel main event match after taking out Gail Kim a week prior.

While TNA managed to escape another “death” and have regained much buzz thanks in part to Matt Hardy’s “broken brilliance”, one other thing that fans should take away from TNA in the year 2016 has been the kind of blood lust character Rosemary has introduced.

With the Demon Assassin at the top of the Knockouts mountain as the new Knockouts Champion and a very successful first year in TNA, the rest of the Knockouts division should keep an eye out for lies ahead for them in the new year. After all, Rosemary’s capability of chaos has no limits!