WWE.com Follow Up Story to ‘That Article’, Comments from Eve and Bella Twins 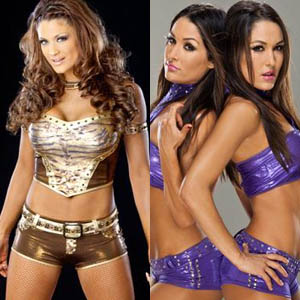 Capitalizing on yesterday’s drama surrounding the “Does the Divas division need saving?” article, WWE.com now has a follow-up featuring comments from Brie and Nikki Bella, as well as Eve Torres.

The article states: “That was until WWE.com ran a feature that, in the eyes of some WWE Divas, gave unnecessary credence to the battle cry of Beth & Natalya. Outraged over the piece, Kelly, Eve and The Bellas took to their Twitter accounts on Sunday afternoon to voice their displeasure. When WWE.com caught up with them in Columbus, Ohio hours before Raw was set to go live, the Divas were still furious.”

Eve told the website: “The truth is people who have not been in our position and are not here living the life we do have no idea what we go through as Divas.”

“They lump certain Divas together as ‘model Divas.’ The truth is, I was never a model. I have an engineering degree. I can be somewhere else, but I chose to be here and I chose to fight for the Divas division every week.”

Meanwhile, Nikki commented: “I think what first set us off was saying that the world cringed when Brie won the [Divas Championship]. Actually, no they didn’t — at all.”

Brie adds: “People can’t stand the fact that, yes, we were models, but now we can kick anyone’s butt in the ring. That’s pretty much what it comes down to.”

You can read the full article here.

Thoughts: No doubt that this will do little to calm the tensions amongst the Divas and from the fans. In fact, it could fuel it even more. By continuing the drama on Dot Com, I would hope that they’re turning it into a storyline and capitalizing on the fact that everyone is talking about the Divas. Are these comments a ‘work’?

What do you think about the Bellas and Eve’s latest comments?