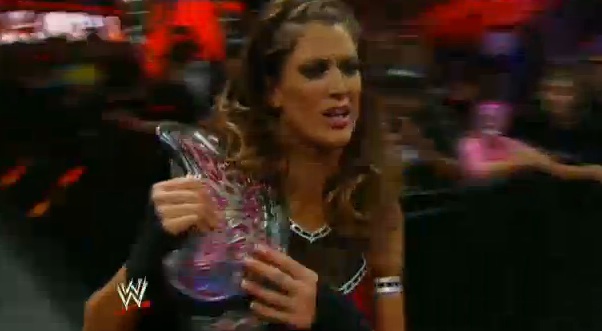 Divas Champion Eve fended off competition from not one, but two challengers for her title at tonight’s Hell in a Cell pay per view.

With tensions mounting in the Divas division over who attacked Kaitlyn last month at Night of Champions (and all fingers being pointed in her direction), Eve managed to defeat both Kaitlyn and former champion, Layla, in a triple threat match.

Following a fast paced match that saw many combinations of the trio of Divas competing in the ring the cunning champion managed to emerge victorious after briefly taking herself out of the equation and allowing Kaitlyn and Layla to do damage to each other.

Kaitlyn nearly had the match with a three count on Layla, but Eve leapt from the top rope with a senton bomb on Kaitlyn, who was on top of Layla. She then pinned Layla for the win in true opportunistic heel fashion.

So, Eve is still atop of the pack. But after her performance tonight, could Kaitlyn have earned a one-on-one match with Eve somewhere down the line for the Divas Title?

Rate the match below:

What did you think of the match? Tell us in the comments!