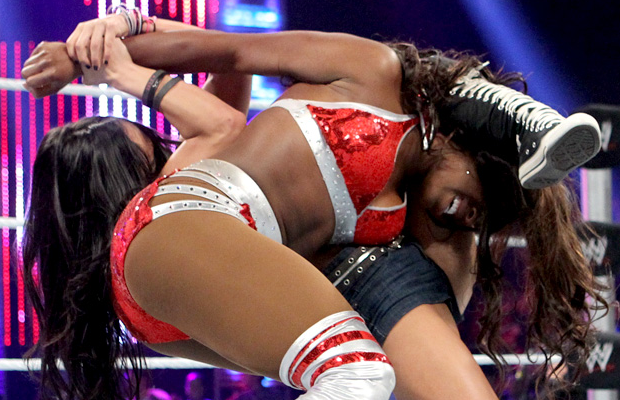 What’s up Diva fans and welcome to the Main Event Redux. In my first of two Reduxes today, WWE Divas Champion AJ Lee, with Layla by her side, faces off against Planet Funk’s finest in-ring export Naomi. Naomi is accompanied by Planet Funk’s finest mouthpiece export, Cameron (can’t leave her out in the compliments department!) and Tons of Funk aren’t anywhere to be seen – hurray! The title may give things away yet maybe it doesn’t.. maybe I’m lying! TO THE VIDEO!

We first see AJ Lee and Layla skipping and strutting in a hallway before a pointless fact that no-one cares about comes on screen. In the arena, WWE Divas Champ AJ and her new sidekick, Layla are the first to make their presence felt in the arena. Following their particularly pink entrance, get your glitterballs at the ready, The Funkadactyls are in the house! Everyone favorite un-fossilized prehistoric reptile/human hybrids are in the building and both are looking “the bomb.com” in red. Looking great is one thing, yet who’ll get it done in the ring?

Side note: Tony Chimel, how hard is it to announce the place where someone is from and who is accompanying them to the ring? It’s basic announcing protocol and you never do it. Start.

The NXT Season 3 semi-final rematch kicks off with a collar and elbow tie-up between the girls. AJ and Naomi exchange various wristlocks before AJ rams Naomi head first to the mat twice. Naomi trips AJ into the splits before kicking her in the mush and although it only gets a near fall, the move was very innovative. Naomi works over AJ’s arm before AJ applies a waistlock. Naomi gets out of it in a way that only she can – she twerks that ass! It looked good and was effective as opposed to looking like a drunk granny at a wedding *coughLAYLAcough*, so I can deal with this dancing. Naomi is thrown over the top rope yet she flips and lands on her feet on the apron. She kicks AJ in the head before going for a springboard move of some kind. Before she can fly though, AJ clips her wings so to speak, knocking the top rope and sending Naomi face first to the mat.

AJ goes for a cover, which she follows up with a chinlock. Cameron motivates the crowd as Naomi starts to make it to her feet. AJ tries to keep momentum in her favour with a knee to the gut, yet after she whips Naomi, the Planet Funk native avoids contact. Naomi goes for a spin kick, AJ ducks it and then AJ delivers one of her own, right to the face. The champ is always one step ahead! AJ channels her ex-boyfriend by applying a sleeper hold on Naomi, a sound, logical strategy that I’m a fan of. Cameron bashes her pom poms together like it’s going out of fashion and Naomi starts to feed off the energy from the crowd, yet it’s still not enough quite yet. AJ mocks Naomi before kicking her in the gut and running off the ropes. When she rebounds back towards her opponent, she is met with a gorgeous spinning kick by Naomi, who looks to be on the start of a roll!

Naomi gets her breath before hitting a dropkick/spinning elbow/flipping clothesline combo. Naomi screams in a Michael Jackson-esque fashion and then does the greatest move since the Moonwalk, the Rear View! WWE’s Dirty Diana Layla then gets on the apron to distract Naomi from getting the win, yet she get’s more than she was bargaining for as Cameron physically tells her to Beat it by whacking her face off the apron – SHAMONE! Cameron clicks her fingers like the sassy legend that she is, yet she won’t be happy for too long as Naomi is locked in the Black Widow. The same move that made her tap to AJ back in NXT Season 3 has came back to her haunt again as history repeats itself and AJ gets the submission victory.

Also, check out Natalya slap the crap out of Antonio Cesaro‘s mouth later in the night as she accompanied Great Khali for his match against Jack Swagger. Look out for Zeb Colter‘s hilarious angry face at the end of the clip!

On top of that, Summer Rae fans, if you like seeing her shake her money-maker, then she did so last night along with Fandango, in an attempt to distract The Miz from commentating when there was no match going on. Yeah, it didn’t make sense to me either.

Thoughts: While some people may have thought there were too many rest holds in this match, I actually really liked it. The girls had nice chemistry and the rest holds made perfect sense. Although they were basic and could have been slightly more interesting, they told the perfect story. AJ had dropped Naomi on her face/head earlier the match and she targeted that part of the body relentlessly. Not only would they have made Naomi groggy, they were the perfect way to wear down Naomi’s neck ready for the Black Widow.

The Funkadactyls were impressive yet again in their respective roles. Naomi is obviously fantastic in the ring and she makes flipping around look effortless. Although Naomi is showcasing more of a personality as of late, Cameron is still the Charisma Queen in their duo, and she showed it tonight.

As for Layla, stop overacting please. It’s not funny and it doesn’t make me respect you as a heel performer. I don’t like it. I did like how she was with AJ again though and she was the simple distraction that swung the match AJ’s way. If this pairing is going to work, they need to constantly be together, otherwise, Layla has less of a purpose than she already does. She did exactly what she needed to do tonight. If you’re going to be a valet/manager, you have to make yourself felt. Props to Layla, she did that well.

A final note on Nattie, although some will hate her still being with Khali and Hornswoggle, I believe the more time she is on TV, the better. Now it’s been made apparent that Nattie isn’t in love with Khali,. it makes their pairing seem a little more realistic. Not much more, but it’s tolerable now. She made an impact on the match and looked bloody good doing it. DAYUM, whether it’s black underwear on Total Divas or black leather on Main Event, Nattie looks great in black. Of course, that’s in her pink and black blood after all! And with that, stay tuned, Jack will be back!