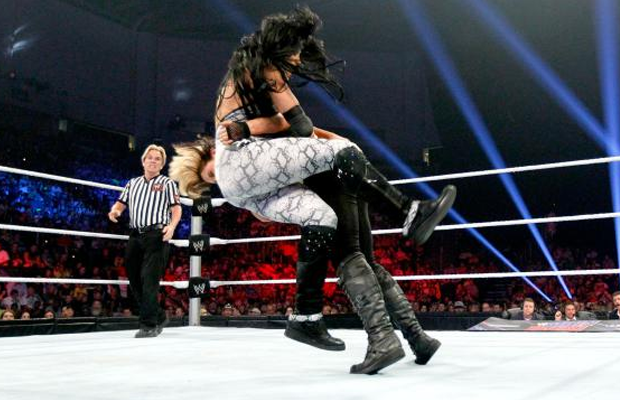 Hello all, and welcome to another edition of the WWE Main Event Redux. I’m covering for Jack this week, and it’s his loss, because we’re getting rematch from last week’s SmackDown. You know, the match that never finished because Kaitlyn went into beast mode on Aksana and the referee.

This time, Kaitlyn is a bit more focused. Will Aksana get the better of her this time? Let’s watch:

Aksana seems to have some residual fear left over from last time, because as soon as Kaitlyn moves toward her, she cowers in the corner. Maybe it’s just a tactic to get the referee on her side?

They back off and face off again, and this time Aksana gets the first blow in, kicking Kaitlyn in the stomach and slamming her face-first to the mat. She lets out her frustrations on Kaitlyn a bit before backing off, and as soon as Kaitlyn gets to her feet, Aksana’s courage fails her, and she tries to get the hell out of the ring.

Kaitlyn catches her opponent before she can escape, but gets an elbow to the face. Aksana keeps on the attack and knocks Kaitlyn to the mat once more, smashing her face to the mat and kicking her in the ribs. Two elbow drops to the midsection later, Kaitlyn finds herself in a submission hold, Aksana still firmly in control

Kaitlyn looks uncharacteristically rag doll-like until she starts to battle out, getting to her feet. She’s almost free when Aksana slams her back down. Aksana toys with her a bit before busting out a sidewalk slam. She then begins crawling cat-like around Kaitlyn, giving me major Candice Michelle vibes, before she kicks Kaitlyn sharply in the face. Aksana goes for the first pin attempt of the match, getting only a two-count.

Into another submission Kaitlyn goes, and the former Divas Champion looks to be fading. She’s resilient, though, and she slowly gets to her feet, pummeling Aksana in the stomach and eventually slamming down her with a backbreaker.

This gives Kaitlyn time to regroup, and she starts to build up her fire again, hitting Aksana with a clothesline, a back elbow and a rough bulldog. She then returns the favor, slamming Aksana’s head to the mat repeatedly. Is she losing control again?

Aksana heads toward a corner, and Kaitlyn takes aim in the opposite. She charges, but Aksana moves out of the way, causing Kaitlyn to eat turnbuckle. She beats on Kaitlyn a bit and gets distracted a bit by the referee’s admonishments. When she turns back around she gets kicked in the stomach, stumbling towards the middle of the ring while Kaitlyn bounces off the ropes, slingshotting herself right into Aksana with a spear. It’s all over but the counting. And soon, that’s over too. Kaitlyn’s your winner!

Thoughts: It was a nice little match that told a story: Aksana is a sneaky heel, but she hasn’t forgotten Kaitlyn flipping out on SmackDown, so she’s getting in the licks where she can. Any time Kaitlyn showed a bit of anger, Aksana tried to peace out, selling the fact that a pissed off Kaitlyn is a dangerous Kaitlyn. It goes a long way to making Kaitlyn a menacing babyface, something we don’t see too often on the Divas side.

I’d like to see Aksana get the chance to grow a bit more into her character. You saw her put some personal touches into the mat, like when she crawled around seductively before smashing her shin into Kaitlyn’s face. Perhaps she could be a dark, mysterious Catwoman-like figure? Think Maryse, but with less in-your-face snootiness. Either way, I want to see more of what Aksana’s made of.