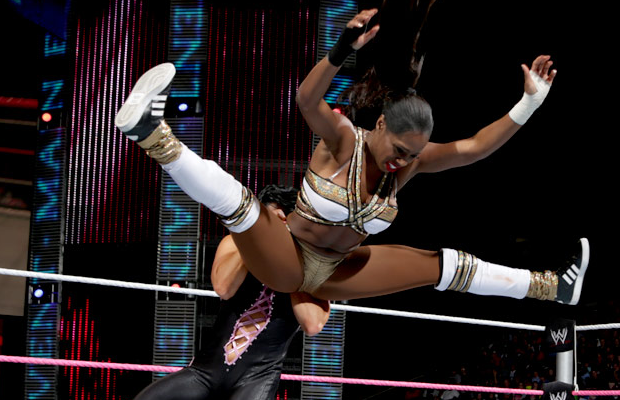 What’s up Diva fans and welcome to the Main Event Redux! We’ve got tag team action this week as Cameron and Naomi, The Funkadactyls, take on the non-Total Divas team of Aksana and Alicia Fox, or Foxsana as I like to call them. Considering Alicia and Aksana have never won a match where they have teamed together, it’s not looking good for the Floridian-Lithuanian tandem but, can they shock us all get a win? TO THE VIDEO!

Missing from the above video are the entrances and she start of the match, which saw Naomi hit Alicia with a headlock takeover. From there, Naomi looked to be utilizing the Stratusfaction, yet instead of sending Alicia to the mat bulldog style, she instead floated of Alicia and into a sunset flip style pin attempt. Near seamlessly done – lovely! After that near fall, Alicia is quick to catch her breath back and regain her composure, hitting Naomi with a on-point dropkick. Naomi gives it right back to Alicia though, booting her in the face before making a tag to Cameron.

The funky duo utilise a sensationally crisp double team maneuver which saw Naomi hoist Cameron onto Alicia’s shoulders so she could hit a beautiful hurricanrana. Cameron then forearms the stuffing out of Alicia before whipping her across the ring. Alicia grasps the ropes on the opposite side and then throws Cameron over the top rope after the funky mouthpiece ran towards her. Cameron lands on her feet and gets rid of Alicia for the time being, yet after being distracted by Aksana, Alicia takes advantange of the situation by dropkicking Cameron in the head, which Cameron sells amazingly. Clearly she’s been studying her idol Alicia’s tapes on how to sell like crazy! After a two count, Alicia tags in Aksana, who kicks Cameron in the chest before ramming her face into the mat. Aksana then goes for a scoop slam yet Cameron reverses it in a pin attempt before tagging Naomi back in.

Naomi returns to the ring all guns blazing and hits a flying hurricanrana, which Aksana clearly cannot take properly as her timing is way off. After a dropkick, Naomi’s irish whip is reverse yet she tries not to let that bother her by flipping over the ropes. Well, she tried to. She quickly recovers and forearms Aksana before going to the apron like what should have happened. Following a high kick and flip back over the ropes and Aksana, Naomi goes for a wheelbarrow armdrag or bulldog yey Aksana completely botches it, falling to the ground. Naomi, ever the profesh, just gets on with things, pushing Aksana to the ground hard as a way of telling her “Gurl, you mucked up!” Naomi hits a snapmare and leg drop next, before Alicia uses her crotch of all body parts to break up a potential three count. Alicia then dumps Cameron to the outside so then the two heels can try to work on Naomi. Naomi ducks under a double clothesline, Cameron trips up Alicia and after Naomi uses her moneymaker in a way Goldust would be jealous of (a.k.a The Rear View), Naomi pins Aksana for the win.

Thoughts: A short and neither sweet or sour showing for the Divas. There were some definite positives like the chemistry between Cameron and Naomi and Naomi in general (except for the slightly-botched flip). Although slight botches did occur, Naomi was a total trooper; she dusted her self off and instantaneously sorted things out and got them back on track, nearly without anyone noticing something had gone wrong. Another upside was Alicia’s hilarious pinfall break-up with her lady region/thighs (so random!) and the fact she Aksana’s sexy slug crawl was nowhere to be seen – HOORAY!

The downsides were of course, the slight botch from Naomi and the bigger botch from Aksana. The latter, coupled with her being unable to take the flying hurricanrana properly really make me scratch my head as to why WWE are high on Aksana. If they like sloppy in-ring work that does nothing to stand out, then I guess WWE are high on her! But in all seriousness, Aksana does have potential, but her time as a heel is over. She needs to freshen up her look completely and turn face. Until then, she’s continue to be as stale as 85 week old bread for me – sorry!