WWE Night of Champions in Review: Michelle Unifies The Titles But What About Layla? 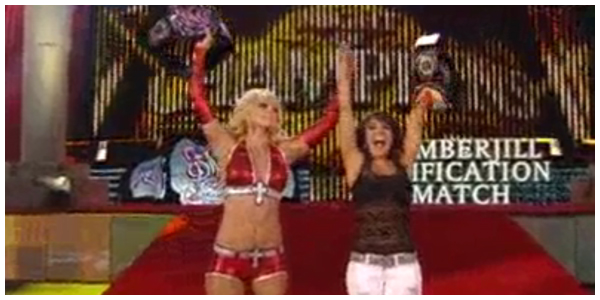 Despite the horrible build-up, pointless Lay-Cool fighting over who would face Melina, and the lack of a Divas Champion on Raw, the Night of Champions unification match for the Divas and Women’s Championships took place anyway. On SmackDown, we witnessed Michelle McCool pull the wool over Layla‘s eyes in order to get herself into this match with Melina for the opportunity to unify the titles. Layla left SmackDown in a furious rage and vowed that on Sunday, Michelle would stand alone. All of us knew better but for the majority, the outcome wasn’t what we expected. Take a look at how all the drama unfolded.

Seeing as how the match is being contested under Lumberjill rules, all the WWE Divas (including a pissy looking Layla) make their way out to the ring first. There are a crap ton of fashion mistakes going on tonight but the Bella Twins certainly look nice, as does Maryse. The Lumberjills get settled around the ring and Michelle’s theme music begins to play. She walks out with both halves of the Women’s Championship and she’s rocking some fierce new red gear. Unfortunately, she gets absolutely no reaction from the crowd during her entrance. Michelle poses with the belt and then Melina’s music hits. She waltzs out to an absolutely massive pop and sadly, she is not in new ring gear. She gets on the apron of the ring and sinks down into her sexy split, and that’s when Michelle decides to attack. Melina hops up just in the nick of time and Michelle ends up on the mat.

Melina goes after her but both women end up in the ring. Michelle scrambles to the ropes and Melina stands tall and proud. Melina sheds her fur vest and the bell rings. The match is on. Both girls lock up and begin to jockey for position. Michelle forces Melina back into the corner, but Melina whips it around. Michelle forces her foe to the ground and both roll around before tumbling out of the ring. They finally break the hold and both girls get to their feet. Several Lumberjills stand around and wait for their cue, but Michelle diverts their attention by slapping Rosa across the face and getting in the ring. None of the Lumberjills bother to attack Melina and she slides back into the ring after kicking Michelle in the stomach. She then throws her down by the hair and starts throwing forearms. Melina throws herself into the ropes and attempts what looks like a hurricanrana, but it doesn’t work out. Instead she lands on her feet and Kaval kicks (hee hee) Michelle to the ground. Melina goes back at Michelle but the co-Women’s Champion is able to fend her off. They both block a kick from each other and end up in the corner.

The fight goes on until finally Melina gains the upper-hand. She throws Michelle’s legs through the ropes and climbs up to the top turnbuckle on her knees. She signals for one of her trademarks but Michelle anticipates it and throws Melina off the top rope onto the concrete. The Lumberjills make no move to go after Melina. The LA beauty is slow to her feet but she finally ends up back inside. Michelle is waiting and takes Melina down. Michelle begins laying into Melina with kicks and forearms, and goes for the cover. She only gets a two. Melina is picked up but only to be knocked down again not once, but twice. She tries to get up using the ropes but Michelle is absolutely relentless. Her offense continues and she locks Melina in a head scissor.s The Diva’s Champ tries to get out of it and eventually Michelle breaks the hold. Thinking that she’s sufficiently worn Melina down, Michelle goes for the Faith Breaker.

Melina pulls herself up into a mid-air sitting position and fights her way out of the move. Michelle gets planted face first into the mat and Melina gingerly goes on the attack. Michelle is able to get Melina in a belly-to-belly suplex and ground her, and then she goes for the pin. Afterward, things get interesting when Natalya decides to get involved. She distracts Michelle and they have a heated exchange. This draws the attention of the official in charge and while he is chastising Nattie, Melina rolls Michelle up for the victory. She seriously has the FSU grad pinned for a count of 234972039874234 before home dude turns around and begins to count. It surprises no one when Michelle kicks out.

Michelle is quick to her feet and takes down Melina with a clothesline. Then she jumps to the outside. She goes right for Nattie, but the one-on-one doesn’t last. All the Lumberjills get involved and they start tearing Michelle to pieces. There’s a funny moment when Rosa tries to throw a punch at Jillian, but Jillian blocks it. That was an obvious miscommunication/epic fail. Anyway, the girls toss Michelle back in the ring and Melina takes control. She eventually ends up laying Michelle out on the ropes and using them for her own momentum, Melina charges towards her blonde headed opponent and lands in the middle of Michelle’s back on her knees. Melina lets out a Primal Scream and Michelle rushes her. Melina drops into a back bend to miss whatever Michelle was trying to throw, but Michelle catches on and slams Melina to the mat. She forces Melina in the corner and sets her on the top rope.

I can’t tell if this was a botch or planned. Michelle looks to be going for a superplex but maybe she missed her footing because all of a sudden both girls take a big tumble to the outside of the ring. None of the Lumberjills except for Nattie make a move. Natalya throws one punch but that’s it. Gail Kim goes to help Melina up and things temporarily stop for a few seconds. Once Melina is safely inside the ring, the girls start attacking Michelle again. This gives Miss Layla El all the time in the world to waltz into the ring and start beating down Melina. Melina fights back and she dumps Layla to the outside. The Divas turn their focus on Layla and Michelle slips away. She gets back in the ring and greets Melina with a big boot to the skull. Melina goes down and Michelle makes the cover. Layla climbs back into the ring and the Lay-Cool lovefest is on. The girls hug and celebrate next to Melina’s fallen body and every other Diva stands there disgusted over what just transpired. Lay-Cool celebrate on their way up the ramp while the face Divas get in the ring to console Melina and watch in horror.

Observations: Lots to talk about so lets get started. The match didn’t do it for me. I thought this was one of their worst matches in my opinion. It seemed sloppy and their transitions were slow. They do have amazing chemistry, but tonight it wasn’t working as well as it usually does. I think the factors involved contributed to that. They weren’t able to hit as hard like they did at NOC ’09 and that’s due to the fact their outside action was limited. What I did enjoy about the match is how the Lumberjills played a huge part. I really enjoyed the story they told tonight. The fact all of them were just waiting for Michelle to get tossed on the outside was brilliant. I really enjoyed seeing them gang up on her. Layla sneaking in the ring was pretty good, but the ending was predictable.

I didn’t want Michelle to win. I really thought Melina deserved it out of the two. Michelle has accomplished so much already and I wanted Melina to have this moment. That said, I think the forgotten element in all this is Layla. She did get screwed out of an epic opportunity and I can’t wrap my head around why that happened to her. Layla has improved so much and as the woman on record as the actual holder of the Women’s Championship this should have been her moment. The only thing I can think of to justify this is that perhaps the WWE went with Michelle in this case because she and Melina do bring out the best in each other. I may not have been crazy about the match, but it is the best thing we’ve seen on television in a very long time from any combination of Divas.

The parts of the match that stand out the most to me are the beginning when Melina is down in her split entrance. Michelle has attacked her before from that position but this time the savvy vetran was waiting for her. All the Lumberjills ganging up on Michelle was another highlight. We’ve never seen that in one of these matches before and it was nice seeing everyone play a role tonight. Last but not least, Rosa’s epic fail with Jillian was another highlight. I’m not sure what happened there but Rosa got real confused. It was a nice little hot mess and you know me! I looooove hot messes!

Tonight’s pay-per-view was a whole was just okay. There’s nothing more to really say. I wish the outcome would have been different, but Michelle is a good champion. She’s got a damn good storyline on SmackDown and I’m definitely anxious to see where this is going to lead. How close is the Glamazon to returning? Is the Hart Dynasty title loss a blessing for Natalya? What happens to the Raw girls now? Where does Melina go? The questions could go on and on, but this Redux is coming to a close. Hell In A Cell is only two weeks away. Wonder if there will be a Diva match on that one?