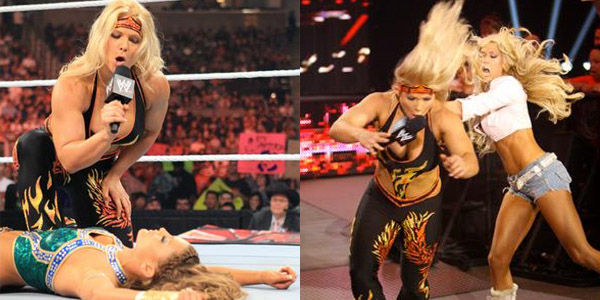 Last week, Beth Phoenix sent shockwaves throughout the Divas division as she became the new #1 Contender for the Divas Title — and made one hell of a statement by declaring that the days of the ‘cute, blonde little bimbos’ are over.

With anticipation high to see how WWE would follow through on this final episode of Raw before SummerSlam, the new attitude Beth was in singles action against Eve Torres. Let’s watch and review…

Beth was out first followed by Eve and as the bell rings, the two Divas lock up and fight for position. Eve tries to lock in an arm submission but Beth backs her into the ring ropes. The referee breaks up the pair but Beth sneaks in a cheap shot back elbow.

Eve is whipped against the ropes but ducks Beth, instead rolling over her back and hitting her with a dropkick, the force of which sends Beth retreating against the ropes trying to stay on her feet. Eve charges at Beth but gets thrown over the top rope and lands on the apron where she hits Beth with a forearm. Beth, not happy with this, charges at Eve knocking her off the apron to the floor below.

The new, aggressive Beth Phoenix is clearly not playing! The Glamazon grabs Eve by the hair, throwing her into the barricade, much like she did Kelly Kelly last week. Eve lands hard. I think she may have even landed on her head. Ouch!

Adding insult to injury, Beth grabs Eve by the hair (and yes, that sh*t hurts!) dragging her back into the ring. Eve, gurl. You’re gonna need a head massage tomorrow. Beth goes for a cover but Eve resiliently kicks out. Beth again goes for Eve’s hair, slamming her against the mat by her hair, not once but twice. Beth follows up with an elbow drop and another pin attempt but no three.

Beth picks Eve up, clubbing her across the back, and whips her into the ropes. Beth picks her up for some sort of powerslam but Eve wriggles free and hits a dropkick. Well, attempts to a hit a dropkick would probably be more accurate. Eve’s foot just lightly connects with Beth. Beth sells it nonetheless, backing into the ropes. Eve, however, makes up for her faux pas with a forearm and knee shot followed by a lovely kick to the face, wearing down the Pinup Strong Diva. Still, Beth is on her feet.

Eve attempts to whip Beth into the corner but Beth uses her strength and power to stand her position, not budging an inch. Beth reverses the Irish whip, whipping Eve into the corner and she lands face-first into the top turnbuckle. Beth runs at Eve but gets hit with a back elbow from the former Divas Champ. Eve follows up by using the bottom rope for a boost and landing a cool looking kick to the back of Beth’s head.

With Beth finally down, Eve wastes time by not going for a cover — instead she opts to go up top for a moonsault. Eve perches up on the top turnbuckle but before she can hit the move, Beth is behind her, cutting her off at the legs leading to an awkward landing on the ropes. Beth knows what time it is…

Glam Slam! Eve takes the move like a pro and it’s all over.

After the match, the Glamazon grabs the microphone for the second time in as many weeks — clearly a world record for the Divas — and imparts this week’s words of wisdom. “I’m so sick of Divas like you and Kelly Kelly making a mockery of the Divas division,” Beth says to an applaud from the crowd. Wait, I don’t think you’re supposed to like her. “No more booty popping. No more splits. No more stinkfaces.”

Meanwhile on commentary, old perv Lawler: “That takes out 90% of the fun of the Divas division for me.” Don’t you have a high school girl to bother, Jerry? Shut up.

As Beth leaves the ring, she stops on the ramp for one last message to Eve. However, before she can even get her sentence out… BAM! Her opponent for Sunday’s SummerSlam, Kelly Kelly, appears, hitting Beth across the back and sending her to the ground.

We end with Kelly and Beth staredown ahead of Sunday’s big match.

Thoughts: Let’s start with the match. I enjoyed it. I don’t recall seeing these two compete in a match before but I thought they put on a good show last night. Eve took some punishment from the Glamazon and really sold it well. Of course, I still think she needs to work on her dropkicks but I think she kind of made up for that with not one, but two awesome kicks. This was an enjoyable match.

As for Beth’s post-match promo, well, like CM Punk, she pretty much seems to be echoing what the fans want. We don’t want to see stinkfaces. We don’t want to see booty pops. We want competition. And despite Jerry Lawler’s best efforts (okay, I’m sure it wasn’t premeditated) to bury the angle with his comments, I hope that this does indeed mean some change for the Divas with Beth — and Natalya on SmackDown — starting a crusade against stuff like that and demanding better matches. I’ve already said my piece on the splits comment, so I won’t go further into that. I will say, however — when you have characters like Beth and Punk kind of echoing sentiments of the audience, can they really be considered heels? Technically, I guess in WWE’s eyes, Beth is the heel because everything must be black and white. Heels and faces. Good and evil. But for me, Beth (and Natalya), seem to have adopted this new evolution of character that CM Punk recently started where they almost speak for the fans at home and go against the norms and conventions of WWE. Not quite heel, but not quite babyface.

Kelly Kelly’s attack on Beth from behind rubbed me as a heel-like tactic and I think they could’ve gone a different direction. I can see why they did it the way they did; Beth has the strength and size advantage, so it would make sense to have Kelly attack her from behind to one-up her because she probably wouldn’t get one over on her face-to-face, but this goes against the grain of a typical babyface, which Kelly is. I think this made Kelly look kind of cowardly rather than a brave, courageous underdog. I would have had K2 come out and face Beth eye-to-eye in a staredown. Then you could have Beth just walking away, playing mind games, indicating that she’ll wait till Sunday to destroy Kelly. It also keeps Kelly as the brave, courageous, underdog babyface.

Anyhoo, despite my nitpicking, I thought the entire segment was well done this week. There was just enough progression and build for Sunday. I’m excited for SummerSlam.

What did you think of the Divas last night? Tell us in the comments!