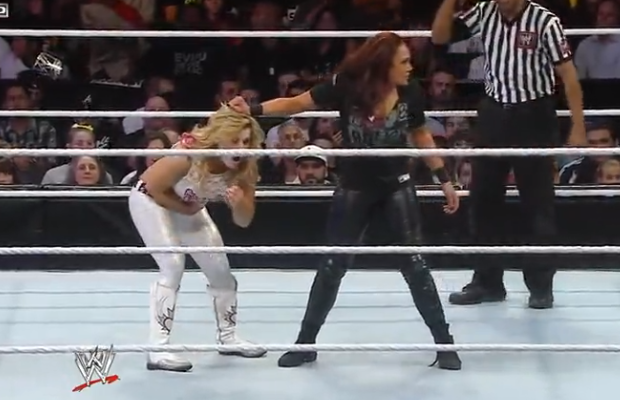 What’s up Diva fans and welcome to this week’s WWE Superstars Redux. In a rematch from last week’s edition, Natalya is going one-on-one with Tamina Snuka. This is the rubber match between the two, who have clashed twice in recent weeks, with Natalya picking up the win in the first and Tamina fighting back with a victory in the second last week. Who will leave this week’s E show with a 2 on their side of the scoreboard? Will Natalya manage to get her third win of the week? Will Tamina actually hit Nattie with the leather waistcoat or just miss altogether? So many questions.

Natalya’s iconic theme song opens up the third show this week and out steps the Total Diva. Learning her lesson from Main Event, Nattie decides to stand next to a woman this time instead of standing next to a young boy who might grab one of her bazookas. Tamina and her island-esque tron that no longer suits her character appear next and as usual, she looks like she means business.

The match starts with Tamina belting Natalya in the stomach before grasping Natalya’s wrist and arm, twisting the arm in various holds. Nattie eventually twists her way out of danger… for a split second, as Tamina grabs her by the hair and thrusts her to the mat again. Natalya floats over her foe after getting Irish whipped and she gets a two count on Tamina. Tamina hits back hard though, punching Tal in the face before bulldozing her with a sick clothesline. During all this, Tamina somehow found time to take the bobble out of her hair. That’s what I call multi-tasking!

Tamina mounts Nattie and releases a series of blows before arguing with the ref and getting tripped up by Natalya. Undeterred by her stumble, Tamina kicks her opponent before throwing the waistcoat at Nattie and choking her on the bottom rope. Tamina works the throat and neck area some more with a chinlock and then targets the back of Natalya’s head when she throws Nattie down when she starts to fight out. Following a series of knee drops, Tamina grabs the top of Natalya’s skull and her jaw, pushing the pair away from one another. Natalya fights back again yet she’s too out of breath and Tamina capitalizes on this with a big powerslam for two.

Tamina throws her toys out of the pram towards the referee, as she moans that she only got a two count. Got to love her attitude here! After a knee to the gut, Tamina flies at Natalya in the corner, yet the Dungeon Diva dodges the attack and launches one of her own with a major big back body drop!

A clothesline combination ensues, as does a succession of suplexes. These tandem moves don’t get the job done though for Nattie, who can only muster a two count. Natalya aims to hit the Nat by Nature clothesline yet she spins right into a MAHOOSIVE big boot from Tamina! Tamina grabs Natalya instead of going for a cover, and this nearly costs her as Natalya hits a small package for two. Fighting back with a knee, Tamina regains control before shouting something about people to the crowd. The Pacific Punisher tries to end it with a Samoan Drop, yet Natalya wriggles free, manages to lock in the Sharpshooter and Natalya makes it three wins in one week!

Thoughts: Being picky, I thought Tamina’s submissions were pretty bland and the way she fell over before the Sharpshooter could have looked better yet that is all I can fault – I really liked this match.

Tamina’s aggression, antics and interaction with the crowd were all excellent and she has come a long way recently. Her in-ring work is solid, her character has more direction than ever, her attire fits her role and she even provides comedy every time she takes that waistcoat off! Well done for actually hitting your opponent with it this time too Tamina!

Natalya was yet again, as reliable as they come. The way she sold Tamina’s clothesline was brilliant and she is great at acting battered and bruised. Three wins in one week is pretty awesome as well, yet it’s a shame they won’t actually amount to anything. Brilliant job though Natalya, and none violated you on this show!