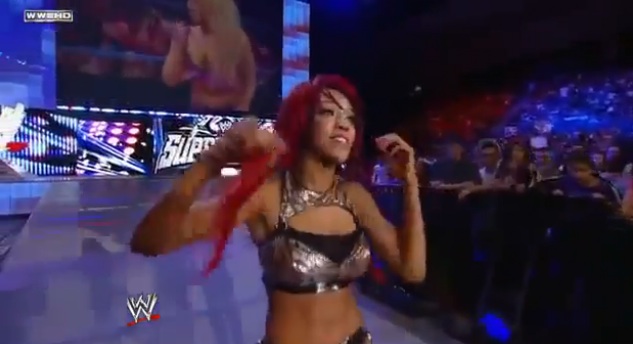 Locked out from their home on Friday nights, the SmackDown Divas have taken solace on Superstars in the past couple of weeks and delivered some great matches to boot! In fact, the MVP of the bunch, it seems, has been one Alicia Fox who picked up a victory over Kaitlyn last week (all the while, bringing Kaitlyn to her best match in WWE thus far).

This week, she gets some stronger competition in fellow former Divas Champ, Natalya, in what has to be the longest Divas match in recent memory.

With the pressure of performing on the ‘big shows’ i.e. Raw and SmackDown off, it seems like the pair decided to have some fun, making the match about the only thing that garners as much discussion as the Divas matches themselves: Alicia’s weave.

Watch this unbe-weave-able match below:

The stealthy Fox wastes little time, charging at her opponent with a slap to the face. She tries to take Nattie down by her leg but Natalya manages to hobble on one foot maintaining her balance, and reverses the takedown by rolling through and slamming Alicia against the canvas face-first. Nattie applies a leg submission on Fox but the heel Diva manages to apply a headlock on Natalya.

As the pair get back on their feet, Natalya whips Alicia into the ropes, jumps over her and then applies a monkey-flip with her legs which sends Fox into a tailspin.

Natalya charges at Fox, grabbing a good chunk of her hair. Uh oh! You don’t mess with the weave, girlfriend. Natalya shimmies through Alicia’s legs trying to get out of dodge as Alicia comes after her. Fox walks into a shoulder tackle, followed by a pin attempt but manages to kick out.

As Alicia gets back on her feet, a chunk of her hair — which Natalya was tugging at earlier — has fallen out! Oh, hell no. I think you just made Fox angry, Natalya. The pink and black Diva picks up the fallen weave and taunts Foxy with it. Alicia counters an Irish whip into the corner, Natalya uses the turnbuckles to float over the top of Alicia’s head and rolls up Alicia with a nice bridge but no three count.

Natalya wraps her arms around Alicia’s waist from behind as Fox tries to shake her off by clinging to the ropes. Alicia shakes free as Natalya hits the canvas but shows off her athleticism by immediately kipping up. Armdrag into an arm-bar by Natalya as Foxy writhes on the mat. “Where’s my hair?” cries Alicia as she tries to kick Natalya in the face and break free. Natalya continues to control Fox’s arm before picking her up for a running powerslam. Fox breaks free and lands on her feet. Natalya turns around and walks into a hefty slap from the former Divas Champion.

Fox follows up by slamming Nattie against the mat by her hair and then guillotines her under the bottom rope.

As we return from a break, Alicia has Nattie in a headlock as she ‘noogies’ her on the head. Nattie tries to break free with elbows to the midsection but Alicia slams her down to the mat. Fox stands over her fallen opponent, talking smack, and slaps her hard in the face before stomping on her.

Alicia applies an arm lock on Natalya, and out of the referee’s line of vision, bites off one of Natalya’s finger nails! Is that hygienic? Alicia spits the nail out in Nattie’s face as payback for the weave incident earlier. Kick to the stomach before stretching Nattie’s arm over the middle rope. Chinlock by Alicia now. Nattie eventually breaks free and picks Fox up for a scoop slam but Alicia levies her weight and falls on top of Natalya in a pin predicament but only gets a two count.

Alicia with a hard kick to the back before screaming, “You owe me new hair!” Alicia chokes Nattie in the corner with her leg over the throat before breaking it up at the referee’s behest. Pin attempt by Fox but Natalya kicks out. Then it’s Natalya’s turn, catching Fox by surprising, and rolling her up in a small package. No three.

Alicia is quick on her feet and jumps back up after the small package, kicking Natalya in the stomach. Headlock by Alicia wearing down her opponent before applying a snapmare and a leg-scissors. While the leg-scissors is locked in, Alicia plays with her opponent, slapping her on the stomach.

Natalya eventually gets to her feet, with Alicia still with her legs wrapped around her. Natalya backs Alicia into the turnbuckles, hanging her in the tree of woe before hitting her with a low dropkick.

The two Divas, both worn out, struggle to their feet. Alicia is fist up, running at Nattie with a knee strike to the corner but Natalya moves out of the way as Fox eats the turnbuckles.

Natalya with a big slap of her own to Fox. She mounts a comeback with clothesline and then kicks Alicia in the face as she comes off the ropes. Now time for a patented discus clothesline which connects perfectly. Nattie picks up Fox for a suplex and keeps her in the air for a short while, showing off her strength, before slamming her against the mat. Fox kicks out of a pin attempt.

Alicia tries to scurry out of the ring but not so fast! Natalya grabs her ring gear and pulls her back into the ring. Natalya has Alicia in fireman’s carry position, but Alicia counters into a sunset flip pin attempt but Natalya rolls through and is in perfect position for the Sharpshooter! Alicia kicks Natalya in the face and rolls her up for the one, two, three.

Fox picks up a big victory after a near-10 minute match. Finding the weave ripped from her head earlier, she picks it up and leaves the ring, showing it off as a badge of honor almost.

Thoughts: As Divas matches go, this is easily ranks up there with some of the best matches we’ve seen thus far in 2011. WWE Superstars has been on fire lately delivering great matches, especially in the last two weeks between Beth/Gail and now Alicia/Natalya.

These two Divas always have great chemistry and it showed in this match. Perhaps the best part of this match is that the Divas actually got afforded way more time than usual. It’s sad that these days we’d settle for a five minute match, but here we got over 10 minutes of action which is unthinkable these days. You could put three weeks of Raw Divas matches into this one segment.

It’s amazing to see the Divas get more time this week on Superstars, and Alicia & Natalya used it well. Very enjoyable match.

I truly hope Superstars will keep up this hot streak and deliver another great match next week. As they say, good things come in threes…