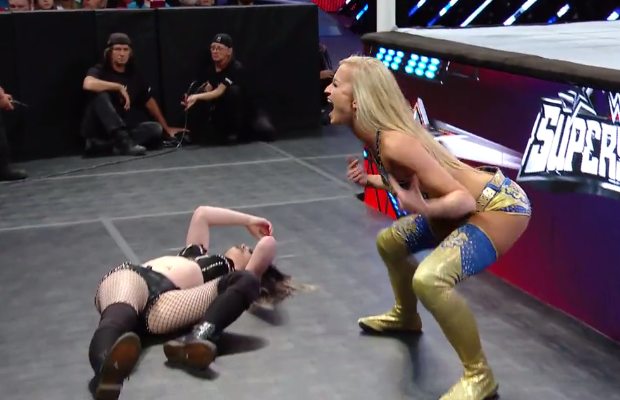 Paige and Summer Rae clashed for the second time in as many weeks on this week’s WWE Superstars, a rematch from Paige’s win on Main Event last week. Before this match, Summer had wrestled three televised matches in a fortnight, losing all three of them. Can she pick up a win on this showing or will she go four for four with a tick in the L column?

Thoughts: This was BY FAR better than their Main Event match last week. While not an unforgettable classic, this was certainly a step up. Not as good as Summer’s match this week against Sasha, this was definitely an improvement over both of Summer’s matches last week, in my opinion.

Let’s quickly address the negatives. Firstly, Paige’s moveset. Other than a fall away slam and her finishers, ‘Raya doesn’t hit a single move anymore. Everything is either a knee strike or a kick. A headbutt if we’re lucky. Everyone knows I’m a huge fan, and while I’m glad we got to see more of her hilarious personality in this match, her moveset continues to be extremely diluted. This style is fine for witnessing a match live and not comparing it to anything else, but when you see the same old routine week on week, it becomes a little stale. A slightly enhanced repertoire (and some new trunks!) and we’ll have a Paige with her mojo back. Constructive criticism over with, let’s jump to the positives!

I thought the start of the match was really fun and allowed this match to stand out over it’s predecessor last week. I also liked how Paige reversed Summer’s guillotine DDT into the fall away slam; I’ve not seen that before and I was impressed. The momentum shift moment was really interesting too. While very similar to last week’s Main Event match (just happening on the arena floor and not the apron), it was definitely better than the game-changer moment when Summer faced Nattie last week.

Summer’s antics were on-point after she kicked Paige’s face off, a nice tidbit to add to Summer’s promo earlier in the week on Main Event to prove how she really does have the acting skills to pull of a condescending heel character. She’s definitely a diamond lost in the shuffle. This week has been nice to see that gemstone get brief moments to sparkle.

A final positive, although the exact same rest hold as the one utilised in her match with Sasha, how much more exciting and unique is it to see something like a Lotus Lock from Summer, rather than a boring keylock submission? I honestly don’t see why a resthold needs to take place in every bloody match, but the crowd were pretty hot for this one, so it worked this time around as the crowd were super behind Paige.

Overall, this was a match I won’t be remembering in five years time, but it was a cute little nugget to help strengthen the women’s output this week. Anything would have been better than Raw, and this sure was!