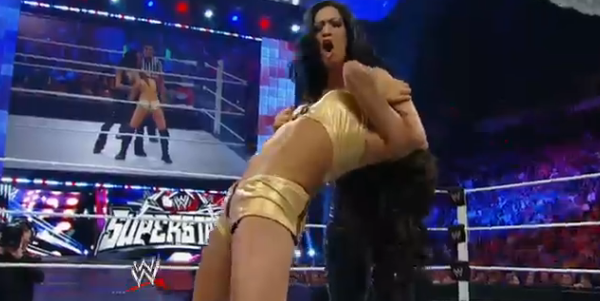 Last week on WWE Superstars, we saw Gail Kim get the best of Melina. The two Divas are battling again this week, this time with partners. Melina’s teaming with Maryse, while Gail pairs up with Eve Torres. Watch the match below:

The team of Maryse and Melina make their entrance to Maryse’s theme music, which suits Melina in a way. Eve and Gail approach the ring to Eve’s tune. Maryse and Eve start off the match, exchanging a few hasty shoves before Eve ducks an attack and takes control. Maryse reverses an Irish whip and attempts a back body drop that Eve telegraphs, sending a kick to Maryse that straightens her up. Eve reserves another attack and sends Maryse face-first onto the mat, going for an early pin. Maryse kicks out before the 2-count.

Trash talk from Melina draws Eve to her corner. She blocks a slap from Melina and delivers one of her own, sending Melina to the mat outside. When she turns back around, though, she pays for her distraction in the form of a kick to the head from Maryse. This prompts a pin attempt that Eve kicks out of at 2. Maryse drags Eve back to her corner and proceeds to bash her face repeatedly against the bottom turnbuckle cover. She tags in Melina, who pulls Eve to the middle of the ring, going for a pin while holding her hands to the mat. Eve kicks out.

Melina locks Eve in a choke, crossing her own arms against her throat. She soon decides to forgo style points and just grabs fistfuls of Eve’s hair, poising her leg behind her head before kicking it face-first to the mat. She repeats the move before going for another pin, which Eve kicks out of pretty quickly. Frustrated, she attempts yet another pin, but Eve again kicks out. Eve attempts in vain to get to Gail, but Melina toys with her, trash talking Gail at the same time. She locks in the crossed-arm choke again, jerking Eve around roughly. Eve eventually gets to her feet, twisting out of the hold and spinning around to hit Melina with a clothesline. This buys her enough time to tag in Gail.

Gail comes bursting into the ring at full speed, hitting Melina with a flurry of offense. Gail attempts an attack in the corner that Melina blocks and tries to turn into a throat-first drop onto the turnbuckle. Gail’s catlike reflexes show themselves, though, as Gail lands in the corner, no damage done. She climbs to the top and effortlessly leaps backwards, twisting in the air to hit Melina with a flying crossbody. She attempts a pin, but Maryse quickly breaks it, prompting Eve to bust into the ring and take her out of the equation. The two battle to the outside as Gail pulls Melina to her feet. Melina manages to take control of the situation, dropping to her knees and busting Gail’s chin.

Melina goes for the Sunset Split, but Gail twists out of it and preps for the Eat Defeat, which Melina blocks as well. She tosses Gail into the corner and pulls her back, shaken, into the Sunset Split. Before she hits it, though, she yells, “You were always a horrible friend!” She hits the move and pins her for the 3-count and the win. She and Maryse celebrate, but not after Maryse gives Gail a little “in your face” action. The two slink out of the ring, looking like they stole a win when, in reality, they won it fair and square. I suppose that’s the mark of a true evildoer: even when they don’t cheat, they look like they did.

This was a solid little tag team match, and I really enjoyed the Gail and Melina action. The little storyline they’ve built up, hinting at a dissolved friendship, adds to what would otherwise be a standard babyfaces vs. heels tag team match. Melina shouting about Gail’s crappy friend status was a cool touch, as she was determined to add insult to injury just as the whole arena was watching. I’d love to see this develop into something, even if it’s told off of Raw on WWE Superstars every week. These two work pretty well together and deserve a little bit of the spotlight.