WWE Superstars Redux (September 8th, 2011): The Quick and the Defeated 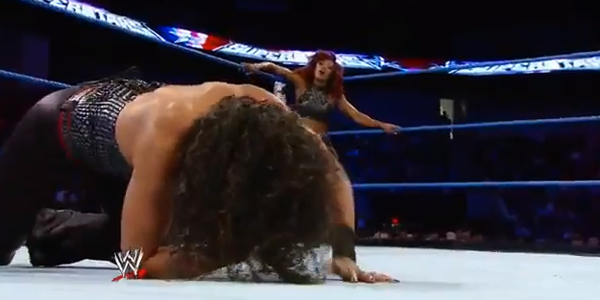 It’s been almost a month since the last time we’ve been treated to a Divas match on WWE Superstars, but we’re back. On deck is a rematch of the last Divas bout to air on Superstars: Alicia Fox vs. Tamina. Alicia’s been racking up quite the winning streak, taking out babyfaces and heels alike on this web show. Will she add yet another victory to her column? Let’s see:

The match begins with a bit of rough handling by Tamina, shoving Alicia by the back of the head and punching and kicking her in the corner. She backs off to charge into her, but Alicia gets her elbow in the way and pulls herself into a split above Tamina, rolling her from the top turnbuckle to the mat into a pin attempt. Tamina kicks out rather quickly and is immediately back on the attack, running into two consecutive armdrags by Alicia. Alicia turns the last into a submission, wrenching Tamina’s arm backwards. Tamina eventually battles out, but Alicia maintains control, setting her up for a neckbreaker. However, before she can hit it, Tamina grabs two handfuls of hair to keep her on her feet, then pulls her over her head by said hair. Ouch. Her scalp likely screaming, Alicia gets back to her feet, only to receive Tamina’s boot full in the face. Hey, at least it distracts her from her scalp pains.

Tamina goes for a pin, but Alicia kicks out at 2. Frustrated, Tamina keeps the punishment going. She pummels Alicia her in the corner, irish whipping her away and back into said corner, and continuing to pummel. Tamina eventually drags Alicia to the center of the ring (but not without a desperate grab at the ropes by Alicia) and goes for another pin. Alicia kicks out again at the 2-count.

Tamina immediately hoists Alicia onto her shoulder, holding her there like a doll and punishing her back. She stomps on the mat a few times for emphasis before letting Alicia down, delivering a suckerpunch to the chin as a punctuation mark to the attack. However, Alicia battles back, hitting Tamina with a quick kick to the stomach to stop her in her tracks. Her next attack is just as quick, wrenching Tamina arm as fast as lightning before regaining a decent distance between them. She seems to decide on a strategy, using her speed advantage to duck away from an attack from Tamina and quickly hitting her with a succession of dropkicks and kicks. She tries to whip Tamina into the corner but it’s reversed. Before she hits the corner, though, Alicia leaps onto the ropes, ceasing her momentum before sending it in the other direction, leaping backwards just in time to land an elbow in Tamina’s face.

Alicia goes for a hasty pin, but Tamina kicks out. She pulls Tamina to her feet but her hesitation costs her, as Tamina gains control and knocks her loopy with a headbutt. Tamina keeps the leisurely pace, hitting a legdrop before setting her up for a splash. This slowness costs her, though, because be the time she gets in the air Alicia is rolling out of the way, leaving her with nothing but mat. She stumbles to her feet, setting herself up perfectly for Alicia’s scissors kick. Alicia hits it, and it’s good enough to earn her the pin and the win.

Yet another win for Alicia! This was a rather short and simple match, but it played off the two Divas’ strengths quite well: Tamina’s brute force and Alicia’s quickness. When Alicia was in control, the match’s pace was quick, with fast attacks that allowed her to hit a move and keep a safe distance from Tamina. When Tamina was in control, the pace screeched to a halt, allowing her to methodically punish Alicia. In the end, the quickness won out and Alicia notched another mark in her ‘W’ column. I wonder if this streak will amount to anything–I’d love to see her eventually confront the champion and demand a title match, citing her numerous wins on Superstars and providing YouTube links to corroborate her claims. All jokes aside, it is an impressive streak she’s built up, and even if this show isn’t televised, all of these wins should amount to something.