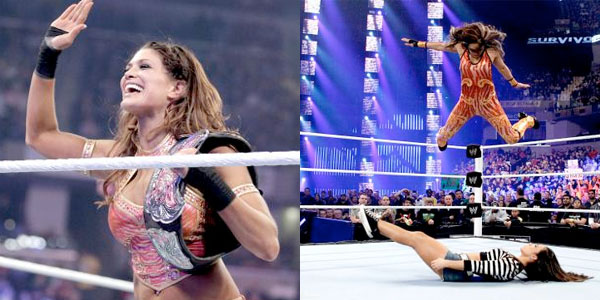 When it comes to the WWE, you have to follow the Big Brother code of life: “Expect the unexpected”. That’s how I’m treating Survivor Series tonight. I’m writing this up as it happens, without any knowledge of what’s going down, and I have very mixed feelings about it. This is without a doubt my favorite pay-per-view of the year behind the Royal Rumble, and I’m honestly excited for the Divas match tonight. The pre-show is scheduled to kick off in about four minutes, and I think I’m ready. I’m hoping they can hype up the rest of the card because just keeping it real, no other match is really exciting me tonight. If there wasn’t a Divas match, I’m not sure I would even be watching.

We kick off our Survivor Series coverage with a bonus traditional Survivor Series match. The first competitor out is none other than Brodus Clay. Of course he has the Funkdactyls with them and Naomi and Cameron are looking gorgeous. On the other side of the spectrum, Rosa Mendes comes out with Primo and Epico! She also looks beautiful. I love how the Divas always amp it up come pay-per-views. Anyway, nice bonus Diva sightings before the night really gets underway.

Thankfully for us, it doesn’t take long for things to get underway. After that opening match, we go backstage where Kaitlyn is walking towards the ring. I’m totally digging her Trish Status WrestleMania-like ring gear. It’s adorable on her and the exact type of thing she should probably wear all the time.

Kaitlyn gets attacked! In a weird sense of deja vu, a blonde comes out of nowhere and goes after Kaitlyn. This time, Kaitlyn is ready. She is able to gain the advantage and ends up ripping the wig off.

Kaitlyn sends Aksana scampering off and Eve comes up out of nowhere. She tries to make sure Kaitlyn is okay, but the good-natured Kaitlyn isn’t buying it. She ends up shoving Eve to the ground, mocking her, and that sets us up for this match.

Twitter seems to have seen two different matches. It either totally sucked or it was amazing. And the reaction is making me laugh, to be honest. It wasn’t the perfect match by any means. Eve slipped up going up the ropes, and the crowd ate her alive for it. But other than that, I didn’t see anything wrong. I LOVE the fact that this was a fight, not a match. We know Eve is a great wrestler, and we know Kaitlyn still has a way to go. There is a lot of anger inside of Kaitlyn so it makes sense for her to want to fight. Everybody criticizes faces for never showing anger, and Kaitlyn did. She came to the ring dressed for a fight, ready for a fight, and she gave Eve one hell of a fight. I didn’t find it sloppy at all. I thought it was perfectly put together from beginning to end. When Eve gained control, she put the wrestling aspect in the match which is pretty much the only way she could stop Kaitlyn.

For once, the match made sense.

Eve is starting to get being an in-ring heel. Her mannerisms and cheap way of winning are making me such a huge fan of her work. I love her beauty queen wave while she was perched on the top turnbuckle and I love how she basically pulled the rug out from underneath Kaitlyn. At the end of the night, she was able to outsmart the fighting babyface and get a victory that wasn’t very dominant. It was classic heel versus face and I couldn’t have asked for a better contest. It was entertaining as hell, both of them are amazing at what they do, and I hope we get another match between them, to be honest.

I think this deserves one more match, and now when you throw Aksana into the mix, I really have no idea. I expect a tag match between Kaitlyn/Layla and Eve/Aksana, and then a singles match between Kaitlyn and Aksana. After that, I don’t know. Maybe they will move on to Natalya challenging Eve. I would love to see that, but first I want one more Eve and Kaitlyn match, with Eve getting a victory that no one can doubt.

And it seems like the ‘E doesn’t want to give me a break. Here comes AJ to the ring! Why is she wearing shorts when it’s like 40 degrees all over the United States?!

Now that was something. Okay. Well, lets start at the top. AJ is solid on the mic and so is Vickie, so I knew this segment wouldn’t be anything to worry about when it came to the speaking aspect. I love both ladies, even if I don’t love this storyline, but AJ played it very interesting. The fabricated photos of Vickie Guerrero with various random superstars was funny. I loved the one with Ricardo myself. Vickie got rightfully upset, but wow.

What I didn’t expect was random Tamina Snuka to come out of nowhere and absolutely destroy AJ. To be honest, I didn’t even know Tamina was still around. That was very unexpected and very surprising, and I kind of like it. It still doesn’t make any sense, like this angle doesn’t make any sense, but having Vickie bring in Tamina is nice. Clearly, Vickie and AJ can’t put their hands on one another so it makes since for Vickie to find another way to deal with her problem since the scandal didn’t really affect AJ like Vickie might have wanted it.

I don’t know what to think. It’s interesting and a little crazy, and a lot different. I’ll just roll with it. Despite the terrible outfit, Tamina looked AMAZING. I recently went brunette but now I’m kind of wishing I picked a shade like Tamina’s color. Her hair is amazing. Very unique turn of events, let’s say.

I thought Survivor Series was a solid efforts from the Divas. I know there are going to be some extreme opinions on this one, which is why I don’t ever bother reading them. Opinions are like assholes, everyone has one, and at this point they’re a dime a dozen. If I’ve learned anything from my time here at Diva Dirt, it’s that even a five star classic will get ripped to shreds because someone’s favorite wasn’t included. Don’t you just love the power of freedom of speech and press?

Until next time… Cryssi out!