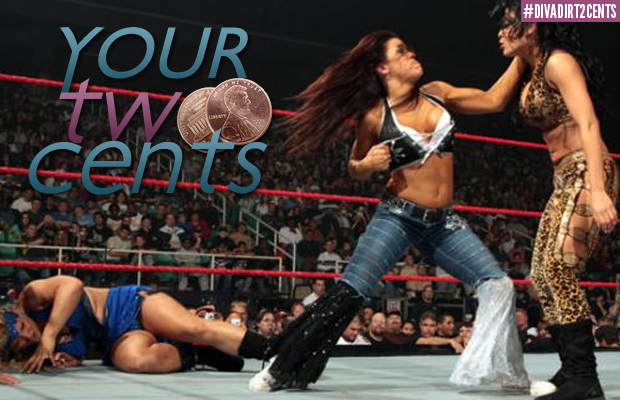 This week, we’re asking this: A Fatal Four-Way for the Divas Title has been booked for Night of Champions, so we we want to know: what has been your favorite multi-woman match in wrestling history? We’ve read your responses on our social media pages and picked some of the best submissions to highlight here on the website. As always, you can join the debate by leaving your comments!

* @alex23contre: My favorite was Beth Phoenix vs. Melina vs. Mickie James for the Women’s Championship!!! [WATCH]

* Alisa M Carpenter Koster: Jessicka Havok vs. Mercedes Martinez vs. Brittney Savage for the WSU Title. I loved everything about that match. [WATCH]

* Angel Rose: Trish Stratus vs. Victoria vs. Gail Kim vs. Lita for the Women’s Championship at Bad Blood 2004. [WATCH]

* Ashley Matthew: Trish Stratus vs. Lita vs. Ivory vs. Jacqueline for the Women’s Championship on Smackdown. Lita’s moonsault in that match was amazing. [WATCH]

* @ClydeEDawkins: I have to go with Eve Torres vs. Layla vs. Kaitlyn at Hell in a Cell last year. Kaitlyn really showed out with her homage to Trish! [WATCH]

* Dave Muscarella: Pretty much anything from SHIMMER involve 3 or more people has been great. The SHIMVIVOR Series matches come to mind especially.

* @_EricHolt_: Beth Phoenix vs. Michelle McCool vs. Layla for the Women’s Championship. It was about time Layla won some championship gold, especially since she had come a long way during her early days as a diva. She’s the first-ever British born Diva to have ever held the Women’s Championship, and she was the FINAL women’s champion. Now that’s what I call making history. [WATCH]

* Josue Guzman: Inaugural Knockouts Championship match at Bound for Glory. It was amazing to see, at the time, all the astounding talent and different personalities TNA had at the start of their Knockouts Division. [WATCH]

* @KristenKiki90: Jazz vs. Lita vs. Trish. Saw it live at WrestleMania 18. It was surreal to see three of my favorites all in the ring! [WATCH]

* M-Kay Hibbert: Gail vs. Traci Brooks vs. Roxxi vs. Jacqueline vs. Christy Hemme on Impact 2007 was a brilliant match.

* @nerdyjordy: Trish vs. Jazz vs. Victoria at WrestleMania XIX in my home city, Seattle. My 1st Wrestlemania! [WATCH]

* Nikolas Dombkowski: Mine would have to be from SHINE 12!! Jessicka Havok vs. Mia Yim vs. Ivelisse Velez. Those three girls gel so well together in the ring. All of them are not afraid to take a hit and thats what made the match so intense. So many holy crap moments! Probably my favorite match so far!

* Sitau Loa: The Fatal Four-Way that included Molly Holly (C) vs. Lita vs. Jazz vs. Victoria where Victoria won the title. [WATCH]

* Stephen Summers: It’s got to be the Six Pack Challenge from Survivor Series 2001. The start of the golden era of Divas. Can watch that match over and over. [WATCH]

What are your two cents on the debate? What is your favorite multi-woman match?